Canadians are starting to feel the sting of rising interest rates

Sep 17, 2018, 04:30 AM by User Not Found
Environics Analytics’ WealthScapes 2018 explores the financial well-being of Canadian households 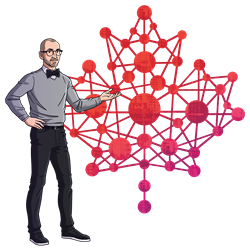 oronto, September 17, 2018 – New analysis by Environics Analytics shows that Canadians are starting to feel the sting of rising interest rates. While the average household net worth in Canada continues to grow, higher interest rates are putting increasing pressure on discretionary spending.

An analysis using the latest release of one of the company’s key financial databases, WealthScapes 2018, found that the average Canadian net worth rose by 8.5 percent to $807,872 at the end of 2017, but much of that wealth was tied up in illiquid assets like real estate. Over the same period, household debt levels have been rising faster than incomes, which could chip away at discretionary spending. Even though household debt climbed by a relatively modest 4.5 percent in 2017, the average year-end interest-expense-to-income ratio rose 40 basis points to 6.4 percent, which is the first increase in a decade.

“For many Canadians the rising interest rates over the past year have already cost them the equivalent of an extra mortgage payment,” says Peter Miron, Environics Analytics’ Senior Vice President, Research and Development and the architect of WealthScapes 2018. “As interest rates have steadily increased since late 2017 we expect the strain on household finances will be greater this year.”

This financial snapshot emerged from data in WealthScapes 2018, now in its 11th year documenting the financial well-being of Canadian households. The database includes 178 key financial and investment statistics updated to the end of December 2017. It includes data on all aspects of household finances, including real estate, employer pension plans, tax-free savings accounts and credit card debt.

Here are some of the other noteworthy findings from the WealthScapes 2018 release:

Nationally, the average net worth of Canadians rose to $807,872 at the end of 2017, an 8.5 percent increase over the previous year. While much of this growth can be attributed to 9.9 percent jump in real estate values across the country, increases to the average household liquid assets (up 6.6 percent) and steady growth in employer pension plans (up 4.1 percent) were also factors.

While the wealthiest 40 percent of Canadian neighbourhoods largely avoided taking on additional debt, this group felt the sting of rising interest rates the most. The interest-expense-to-income ratio for this cohort climbed to 6.9 percent at the end of 2017, which is significantly higher than the rest of Canada (5.6 percent).

While the majority of the provinces have a greater number of lower-net worth households than very wealthy ones, Ontario, Alberta and British Columbia bucked this trend. In each of these provinces there were higher numbers of wealthier neighbourhoods than middle- and low-income neighbourhoods. More than 50 percent of neighbourhoods in these provinces reside in the top two wealth tiers, largely as a result of real estate values.

The top three provinces for net worth growth in 2017 were British Columbia (11.7 percent), Ontario (9.6 percent) and Quebec (6.5 percent). B.C.’s growth was almost exclusively driven by real estate (up 16.1 percent), but those net worth gains were not without cost. Household debt in the province rose by 7.1 percent, largely due to a 7.8 percent increase in mortgage debt coupled with a greater number of households in the province drawing down their savings. Growth in Ontario was somewhat more evenly distributed, but was still led by real estate appreciation (up 11.4 percent) followed by liquid assets (up 6.3 percent).

Meanwhile, the improving net worth picture in Quebec was largely driven by liquid assets (up 8.3 percent), followed by growing real estate values (up 5.4 percent). Quebec also stands out for other reasons. First, the average household debt was largely unchanged, climbing by a modest 2.9 percent in 2017. And second, the increase the household liquid assets was less a result of stock market appreciation and more as a result of higher household savings rates. Much of these funds are conservatively saved in traditional bank accounts and term deposits.

Alberta, like Quebec, also experienced decent growth in liquid assets (up 7.5 percent), but household net worth growth in that province was limited to 5.8 percent due to its relatively tepid real estate market (up 3.3 percent).

Saskatchewan, Manitoba, New Brunswick and Newfoundland and Labrador also lagged in terms of net worth growth in 2017, up 4.0 percent, 4.7 percent, 4.5 percent and 3.7 percent respectively. While the small change to the average household net worth in Saskatchewan can be largely attributed to a slight decline in real estate values (down by 0.4 percent), Manitoba, New Brunswick and Newfoundland and Labrador’s performance was a result of a mix of tepid savings rates and modest real estate growth.

The census metropolitan areas (MAs) within the Atlantic Provinces with the greatest growth in wealth as of the end of 2017 are Kentville, NS (8.3 percent), Cape Breton, NS (7.9 percent) and Summerside, PE (7.8 percent). Kentville and Summerside both can attribute their positive outcomes in 2017 to strong real estate investment (7.9 percent growth and 12.1 percent growth respectively), while Cape Breton invested heavily in liquid assets (12.5 percent growth). Bucking the national and provincial trends, households in Cape Breton and Kentville were busy repaying their debts in 2017. On average household debt balances in Cape Breton dropped 7.3 percent, while households in Kentville slashed their debt by 2.3 percent. The majority of the Atlantic CMAs have experienced decreases to their debt-to-disposable-income ratio, with Cape Breton leading with the greatest decrease (9.8 percent), versus  Canada’s average ratio, which was at 1.5 percent in 2017.

The Prairies generally lagged behind the other provinces in terms of net worth growth in 2017; however, there were some pockets of stronger growth. The best performing CMAs in the Prairies were Strathmore, AB (10.7 percent), Lethbridge, AB (8.8 percent) and Steinbach, MB (7.4 percent). In Strathmore, household debt fell by 16.4 percent in 2017. Unlike many other cities in the country, the root of these cities’ growth is not traced back to the real estate market. Rather, the households of all three cities were aggressively saving over 2017 and their liquid asset balances grew faster than the national average (6.6 percent). The average liquid asset balances per household of Strathmore increased by 8.2 percent, Lethbridge increased by 15.5 percent and Steinbach increased by 15.6 percent.

Vancouver’s scorching hot real estate market (up 17.2 percent) helped the city maintain its hold on its position as the city with the highest household net worth growth in Canada, up 12.7 percent in 2017. But with real estate growth almost double the national average, Vancouver also experienced debt growth just slightly more than double the nation average (up 8.5 percent), driven mostly by mortgages (up 8.9 percent).

Additionally, there was only modest growth in employer pension plans (up 1.1 percent) and liquid asset balances (up 3.7 percent). And despite the growth in net worth, Vancouver’s households felt the cash flow pinch of higher debt balances and interest rates, with households on average spending an additional $1,152 per annum on their interest payments.

The leader of the pack (St. Catharines-Niagara) benefited in particular from the strongest real estate and employer pension plan growth. With all five cities reporting above-average real estate growth, it comes as little surprise that all experienced above-average debt growth as well (up between 6.2 percent and 8.8 percent) although with lower starting debt loads they did not feel the cash flow squeeze of higher interest rates as acutely as other cities.

Although Toronto’s average household net worth growth of 9.5 percent trailed most Southwestern Ontario cities, it was still higher than the Canadian average of 8.5 percent. Like Vancouver much of this growth can be attributed to higher real estate values (up 11.1 percent), although this figure also received a boost from modest liquid assets savings (up 6 percent) and higher pension plan values (up 4.7 percent). With their relatively higher debts, Toronto’s household saw their interest expenses rise by $932 in 2017. At the end of 2017, Toronto’s households were spending almost 9.8 percent of their after-tax income on interest. 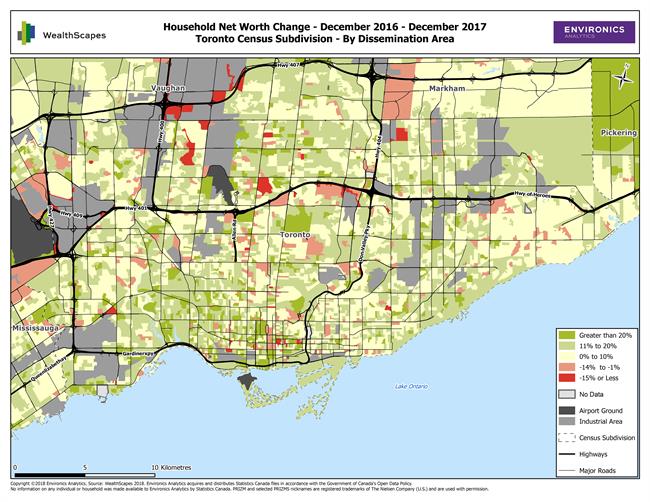 While the households of Calgary had above-average growth (8.6 percent) in their liquid assets as a result of higher savings rates and strong market returns, the modest growth in real estate values (up 4.1 percent) limited the average net worth growth in the city to 6.8 percent in 2017. The modest growth in real estate values also meant households in Calgary households were able to limit their household debt growth to 1.5 percent—two thirds less than the national average. 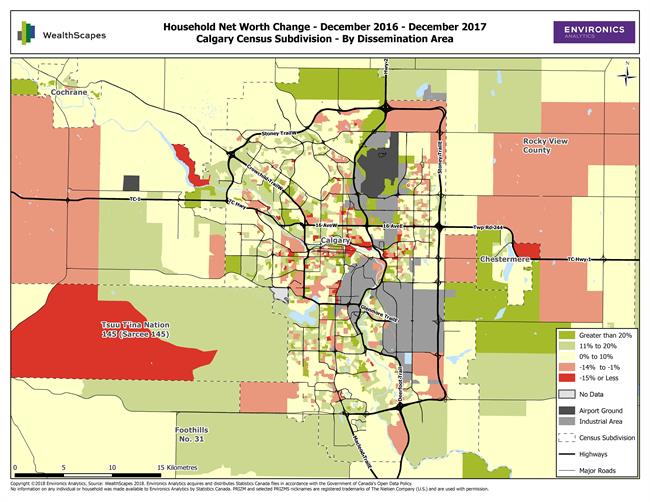 Montreal bucked the national trend towards higher real estate growth (up 6.2%), which, in turn, tempered growth in the city’s average household net worth in 2017 (up 7.0 percent). While growth in home values lagged the national average, the average Montreal household enjoyed strong liquid asset grow of 8.6 percent, which was higher than the national average. This growth in liquid assets was less the result of strong stock market returns and more a result of higher savings rates, with a preference towards conservative asset classes like savings and chequing accounts and GICs. While the households did feel the squeeze of higher interest rates on their debts in 2017, due to their relatively low levels of household debt, higher interest rates only added $384 on their interest expenses to the average Montreal household in 2017, resulting in a below average interest-expense-to-income ratio of 7.8 percent.

Environics Analytics is the premier marketing and analytical services company in Canada. The company offers a full range of analytical services to help customers turn data and analytics into insight, strategy and results. Environics Analytics team of quantitative marketers, modellers and geographers are experts at helping organizations identify their business challenges, develop data-driven solutions and achieve success along every phase of their analytics journey.