Geek Of The Week: Hugh Hibbert

In every life, there are turning points. Hugh Hibbert remembers the moment that changed his career trajectory as if it were yesterday. It was the fall of 2004, and Hugh was taking his first undergraduate course in Geographic Information Systems at the University of Toronto in Scarborough. Handheld mobile devices were still in their
“Mapping Out
a Better World”

infancy, but Hugh’s professor was extolling the power of GIS: soon, he said, businesses would be able to send promotional messages to phone-carrying consumers just as they walked near a store.

“Dollar signs went off in my head,” Hugh recalls. “For the first time, I realized you could apply geography to the marketplace at a very granular level. Suddenly, I needed to find out everything I could about this GIS stuff.”

With the encouragement of his program supervisor, Professor John Miron—father of EA Senior Research Associate Peter Miron—Hugh entered a master’s program in spatial analysis at Ryerson University. That eventually led to an internship at Environics Analytics and, in the fall of 2008, a full-time position. Today, as a Client Advocate in EA’s packaged goods, automotive, public sector and not-for-profit practice, Hugh helps clients turn customer data into geographic intelligence for effective marketing programs.

It’s a job he dearly loves. “I like looking at the data and pulling out nuggets of information that are meaningful to the client,” Hugh says. “It may tell them something they didn’t know or validate what they were thinking with real numbers. But when you can make sense of the numbers, it’s a really cool feeling.”

To be sure, Hugh always had an interest in geography. As a youngster growing up in culturally diverse Thornhill in Markham, he remembers neighbours from Syria, Italy, Korea and Spain. “When I started in public school, a lot of kids spoke English with different accents,” he recalls. “I would go through the encyclopedia to learn about the different cultures present at the school.”

Hugh’s own family fit well in the multicultural community. The product of Jamaican-born parents—his late father owned a heating and cooling business, his mother was a banker turned homemaker—Hugh grew up in a middle-class home and went on to attend the private Bayview Glen School, where he became aware of the gulf between his comfortable home life and the unfair stereotyping that Caribbean-Canadians often faced. “When I was in my neighbourhood, I was treated like the uncrowned prince of Thornhill,” he recalls. “But when I would leave there, people looked at me differently. They’d judge me, to quote Martin Luther King, ‘by the colour of my skin and not the content of my character.’ And I didn’t like being shoved into a box that I didn’t feel belonged in.”
That attitude led to another turning point. At UTSC, Hugh majored in sociology and urban studies because, as he explains, “I thought it would give me a better understanding of issues that aren’t always brought to the forefront—like gender, race and income.” At Ryerson, he wrote his master’s thesis on the settlement patterns of Caribbean groups in Canada, exploring “why certain populations act a certain way.”

“I really want to set an example for young people to be respectful, loving, patient, kind and not judgmental.”

But Hugh wasn’t content to merely study the issues facing the Caribbean-Canadian community.

He began working for the Toronto Parks and Recreation Department, running after-school sports and living skills programs for at-risk youngsters. “We wanted to give kids a place to go to where they wouldn’t get into trouble,” he recalls. At the Thornhill Presbyterian Church, he teaches Sunday school and mentors a youth group that conducts clothing drives and serves meals to the homeless.

“I really want to set an example for young people to be respectful, loving, patient, kind and not judgmental,” Hugh explains. “And I see giving back to the community as a civic duty. Many of us have so much and others have so little. It’s important to look after people who can’t look after themselves.”

As a Client Advocate, Hugh looks after clients, helping them gain insight into their customers and markets. But one thing hasn’t changed since he arrived at EA: his fondness for making maps. “I am first and foremost a geographer,” he says, “and making maps is a very personal experience. You not only display customer data, you also put your personal signature on it with colours and fonts and the way you lay out the maps. For me, there’s a real feeling of accomplishment and pride when you finish a good map.” He also appreciates the art of antique maps, and he’s collected several of Toronto. “I like the old maps that show angels blowing the wind in one or direction and have amazing colours and calligraphy,” he says.

But maps aren’t his only obsession. Hugh was a star midfielder on an intercollegiate soccer team; he was even inducted into the Soccer Hall of Fame at UTSC. “I still play. I still love it,” he says, noting he especially enjoys coaching a youth team. 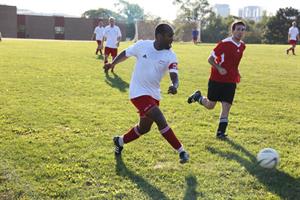 Hugh loves watching the pros play too. In 2010, he and a friend flew to South Africa to watch the World Cup, where they saw eight matches in four cities during the three week-long trip. The trip highlight: watching a game from the beach in Durban along the Indian Ocean. The low point: Getting caught between fans at the Mexico versus Argentina
Captain Hugh showing his stuff on the field of play.

match. “The whole game was filled with taunting from both sides, and every now and then I’d see bottles flying over my head,” he recalls. “Soon, people were jumping over chairs to fight with each other.” Hugh quietly left his seat before the police arrived. “It was one of the greatest trips ever,” he says today.

Back in Toronto, Hugh leads a quieter life with his mother in the family home in Thornhill, where his neighbourhood is classified Asian Affluence by PRIZMC2 and Cosmopolitan Elite by Delta—both lifestyles near the top of the socioeconomic ladder. But he observes his lifestyle is not quite like that of his wealthy neighbours, as described by the PRIZM system. “Yes, we have a lot of education and like the arts and technology,” he says. “But we don’t have a second home, we don’t play golf and we don’t have a Jaguar. We’re more of a Ford family.”

These days, Hugh shares much of his leisure time with his girlfriend, Jenna Would, a psycho-educational consultant. Together, they like to cook, watch movies, go skating and take walks— “low-key, fun activities to enjoy each other’s company,” says Hugh. Having discovered a common interest in helping the disadvantaged, it’s probably no surprise that they also volunteer together at an area homeless shelter.

It could be said that Hugh’s life work is a celebration of the many cultures and concerns that also led to a rewarding career. During holidays, he shares with the office his mother’s traditional Jamaican baked good such as black cake, filled with raisins, cloves and dark rum, and bun, which is similar to a hot cross bun. A colleague from Belarus is especially fond of the Jamaican bun because it reminds him of a delicacy from his homeland. “He has a relationship with my mother through this cake,” Hugh chuckles. “Who’d think that Jamaica and Belarus have anything in common?

“But that’s the beauty about living in Canada,” Hugh continues. “It shows you how small the world is.”