Geek Of The Week: Denver Redman

Helping clients understand what their customers want is Denver Redman’s job as a Client Advocate in the media, retail, real estate and manufacturing practice at Environics Analytics. But if you ask him, what customers really need is a hot sauce that on first taste dances with sweetness before erupting in fire as it goes down.
"Spicing Things Up”

For two years, Denver and his girlfriend Melissa Piacente have experimented with recipes for Redman’s Hot Sauce, a concoction-in-progress that he hopes will one day be as popular as ketchup. “I’d like to see it in everyone’s refrigerator and on everyone’s dinner table,” says Denver boldly. Still testing recipes, he mixes up a new batch every few weeks and brings samples to work to test on willing colleagues. His recipe typically begins with super hot habanero peppers he buys at a local Chinese supermarket, but each batch features a unique blend of lemon, lime and various spices that he never divulges, even to his taste-testers. “That’s the secret,” he says solemnly. 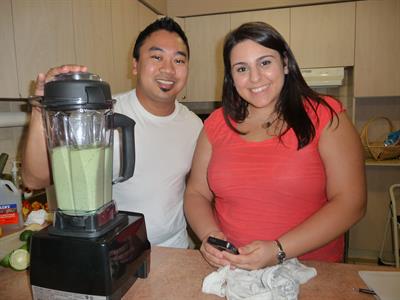 Denver started making hot sauce because he couldn’t find any Canadian brands that sufficiently fired up his palate like the local brands in Trinidad, where he grew up. He remembers his early attempts to replicate the flash as eye-watering failures—“like fire in a bottle,” he says—but his perseverance has led to milder sauces and cheerier colleagues. The latest variation, known officially as Batch J, has been earning raves for the tangy rush from pear juice followed by the peppery heat afterwards. “It’s still too hot,” he says, “but I’m still experimenting.”

"I like the idea of passing on knowledge and empowering them to achieve goals on their own.”

While becoming Canada’s hot sauce king has its appeal, Denver also gets a lot of satisfaction helping clients connect with customers by analyzing their lifestyles, media patterns and social values. “I see my job as translating complex data into a format that clients can absorb,” he explains. “People are different and you have to recognize what they need help with and how you can satisfy their needs. I like the idea of passing on knowledge and empowering them to achieve goals on their own.”

For Denver, interacting with clients is his favourite part of the job. “I’m a very social person,” he says, “and I love talking to clients.” But he’s quick to add that the secret to being a good client advocate is listening closely to your customer. “It sounds simple, but you really have to understand what the client is telling you,” says Denver. “Communication isn’t just words that are being spoken, but body language or their tone on the phone.  You can’t help clients if you don’t really understand their issue.”

Denver’s clients-come-first attitude has earned him praise from practice leader Michele Sexsmith. “He’s always eager to pitch in and help our clients understand the applications of our information,” she says. “Clients really appreciate his training and easy-to-understand explanations that build confidence in using our products like ENVISION.”

Part of that empathy comes from Denver’s roots in business. Born in Calgary, Denver grew up in Trinidad, raised by a Filippino mother and Trinidadian father who ran an appliance repair business. “When other kids were playing with toys, my brother and sister and I grew up playing with wrenches and screwdrivers,” recalls Denver. Although he spent much of his early years on his grandfather’s chicken farm—“with chickens and ducks in the backyard,” he remembers—Denver’s interest turned to math and physics after the family moved to Toronto when he was 16. His parents urged him to become a doctor or a lawyer, but Denver seemed set on a career as a political analyst. “I liked pulling out insights from numbers and research, and I recognize that this isn’t a skill that you’re born with,” he says.

Denver attended the University of Toronto, but by the time he earned an honours Bachelor of Science degree in political science and psychology, he’d mostly lost any professional interest in politics. Instead, he turned to business, working for a year as a merchandiser at Best Buy. “I got to demo all the cool new gadgets,” he says, “but I also learned a lot about dealing with customers.” He then served as an operations manager at his family’s appliance repair business, working alongside his father, mother and brother for two years. Today, his brother runs the business—and Denver couldn’t be more pleased. “My dad told me a long time ago that I wouldn’t like this business,” he says. “But it wasn’t a jab at me. It’s a tough, blue-collar business, and he wanted me to use my education and do something more academic.”

In 2007, Denver entered the Research Analyst Program (RAP) at Georgian College, a year-long course that prepares students for careers in applied marketing and social research. Denver excelled and discovered Environics Analytics through a summer internship in 2008. He joined EA full-time after earning a RAP certificate that year. But classmates may be forgiven if they think he’s still toiling away at the school. For more than five years, Denver was the face of the Georgian RAP program thanks to photographs of him in the school’s online and printed marketing material. “I should have gotten royalties,” he says, laughing. “I was like the Geek of Georgian College.”

Despite leaving the family business, Denver remains close to his family, sharing a duplex unit with his brother while his parents live in the other unit.  Their Scarborough neighbourhood is classified Cluttered Nests (upper-middle-class urban couples and multigenerational families), which seems to fit the Redman clan. “It’s a multicultural neighbourhood with adult children living at home,” he explains. “One of our neighbours is Iranian, the guys across the street are Filipino and nearby is a couple with a husband who’s Greek and the wife is Trinidadian. I love the diversity.” 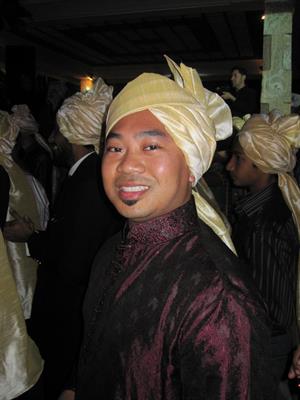 Denver also seems to have absorbed the family’s mechanical skills and has become an accomplished DIYer. He kept his 2000 Oldsmobile Alero running for 250,000 kilometres, doing most of the repairs himself as he logged long miles on road trips to visit relatives in New Jersey. He once replaced the thermostat control on the car, an all-day job that saved him more than $600. “I didn’t put it back the way I took it apart, but it did work,” he says.

When he’s not making hot sauce, Denver likes to go to the beach or just chill in front of a BBQ, grilling ribs or vegetables. “We spend so much time inside at work, I like being outside when I’m off,” he says. “I don’t care whether it’s playing soccer, grilling veggies or washing my car, I like to be out-of-doors.”

But once a week, he and his girlfriend can be found in his kitchen brewing up another hot sauce recipe. To Denver, it’s an act of culinary exploration as much as one of cultural identity. “I’ve often thought about the idea that hot sauce is a lot like multiculturalism,” he says, sniffing an open jar of his pungent green sauce. “The best sauce—and culture—features a mix of different countries. I see myself as a mix of a lot of different cultures from Canada and the Caribbean. And my hot sauce is a mix of ingredients from a lot of different cultures as well. I like to think that we’re both a microcosm of Canada.”

And when he finally perfects the recipe, you can bet the king of Canadian hot saucewill be using data-driven analytics to connect with his best customers. Continental Culture neighbourhoods may be a good place to start.

(other than his own)

The “kick” in this recipe comes from the hot sauce added to the marinade.  This simple recipe is quick and easy, with no boiling involved. As Denver puts it, “Just good ol’ fashion BBQing!”

1. Combine all ingredients and rub vigorously on the ribs. Set aside for a minimum of 20 minutes to marinate. Keep in the refrigerator if marinating for longer, and remove about 15 minutes before cooking to let the meat return to room temperature.

2. Set your barbecue to medium and wait until the temperature is at least 325 °F.

3. Monitor temperature to ensure grill does not overheat, adjusting to maintain a range of 325-375 °F.

4. Ribs should be ready at a minimum of 30 minutes; check to ensure they are cooked.

5. Eat dry or mix with your favourite BBQ sauce.