Geek Of The Week: Donna Lyle

Donna Lyle is one of the reasons the staff at Environics Analytics can sleep a little better at night. As Office Manager and Executive Assistant to the company’s president, she oversees a wide range of activities that ensure the smooth functioning of the company. From accounts payable and accounts receivable, to looking at new office
"EA's Lifeblood

furniture and onboarding new hires, Donna has her fingers in it all. As Jan Kestle’s long-time administrative aide, she coordinates the comings and goings of the company’s most frequent flyer.

“My job is really a little bit of everything,” says Donna. “I deal with clients and associates. I try to resolve problems and keep things moving. But mostly I just try to keep one step ahead of Jan.”

If you’ve ever wondered how someone develops the skillset to be a super-organized administrative professional, consider growing up in the country. Donna’s education began on a 30-acre vegetable farm and apple orchard in North Oakville. While her father raised vegetables for the Campbell Soup company and her mother worked as a public school secretary, Donna received her first lessons in a one-room schoolhouse that her father once attended. “I was the one always doing homework while my brother was outside blowing up things,” she recalls. And like any other young girl, she had crushes on movie stars, and secretly papered her closet walls with a neat collage of pictures of James Dean, Paul Newman and Marlon Brando. “My mess was always hidden,” she laughs.

"I wanted to do something different.”

After learning to type as an 11-year-old, Donna began typing the papers of her mother’s teaching colleagues who were then taking university courses. “They’d pay me a dollar a page,” she remembers, “which was much better than babysitting or outside work. I could pick strawberries and raspberries for five cents a box, but all the other kids were doing that. I wanted to do something different.”

Like many of her peers, Donna got a job out of high school, first working as an expediter at a pump manufacturing company. She doesn’t remember a lot about that first job, although it allowed her to meet her future husband, George Lyle, an expediter at a Toronto steel firm. After learning that she was a baseball fan, he invited her to watch him play ball. They married when she was 22 and, when George became a real estate broker, Donna earned her real estate license to help him. They enjoyed almost 40 years together until George’s death last year. 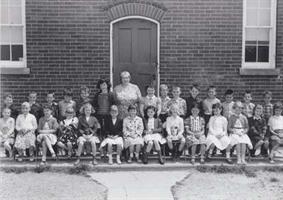 While she helped with her husband’s real estate business on weekends, Donna worked for 15 years at Data Crown, a company that sold shared processing on their computers—before PCs. In 1991, Donna found her way to the analytics industry when she began working for Compusearch, where she would meet a number of colleagues who’d go on to join EA.
Donna attended Coyne Public School,
a one-room schoolhouse. She's the
second from the left.

She held a variety of administrative and accounting jobs at Compusearch; at one time she even worked with a group headed by EA’s Chief Methodologist, Tony Lea. She stayed with the company for 17 years, through acquisitions first by MapInfo and then by Pitney Bowes in 2008, when her job was ruled “redundant.” But just a few days after being let go, she received a call from Jan, the former president of Compusearch, offering her a job at EA. 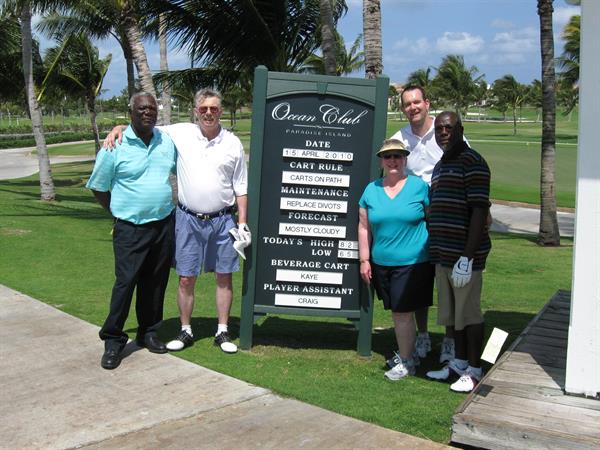 Donna, George (second from left) and friends golfing in the Bahamas in 2010. Donna is an avid golfer.

“It was fantastic,” Donna says. “It was like a big door just opening up. I never felt like a door was closing.”

To Donna, her long experience in the industry helps her deal with clients over the sometimes sensitive issue of accounts receivable. When she has to contact a client about a late payment, she takes a gentle approach. “You can’t be heavy-handed,” she says. “A lot of invoices get lost between acceptance and payable.”

When asked about the favourite part of her job, Donna mentions the many fires, both small and large, that she manages to keep from spiraling out of control. She’s the one who writes staff memos to alert everyone there’s construction in the West Boardroom, what time we should observe a moment of silence on Remembrance Day, and when a meeting with Jan needs to be changed because another one ran long. She keeps it all together with to-do lists that she checks off as tasks are completed. “I like keeping Jan organized and I like dealing with clients,” she says. “The user conference is one of my favourite days of the year because it brings everyone together.”

These days, Donna works an early shift, leaving Ajax on the 7:05 AM Go Train to arrive at the office by eight. She’ll usually read a book on her commute, picking up the latest John Grisham crime novel or historical fiction about the U.S. Civil War. “I go to the library all the time and come home with an armload of books,” she says. Every winter, she and George used to rent a Sarasota, Florida, vacation home from the family of Blaize Clement, a mystery author whose heroine was a cat sitter. 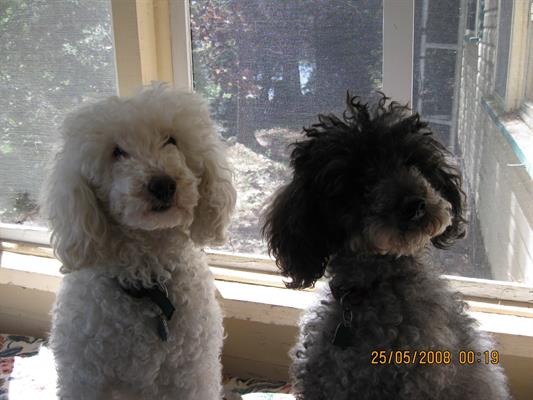 At home, Donna cares for two miniature poodles, Lacy and Oliver, often taking them for walks along Lake Ontario or playing fetch with them at the nearby beach in Pickering. She’s still a sports fan and likes to watch baseball, golf and horse racing on TV.  She likes to catch up with her mother, father, brother and family in Cambridge as often as she can.  An avid golfer, she often meets friends at the golf club where George was a member. They also liked to travel—to Mexico and the Caribbean, golfing and sightseeing—and she plans to visit Scotland next year with a friend. Her most memorable trip was a snorkeling excursion to Aruba. “We went diving around a wreck and the coloured fish were totally amazing,” she recalls.

While Donna still has relatives in Scotland and Ireland, she is proud to tell you that her family has lived in Canada for seven generations. If you Google “Leslie Log House,” (Donna’s maiden name is Leslie), the search will take you to a photo of a log cabin built by one of her ancestors in 1826 at a location north of Derry. Today it sits in Mississauga, having been restored and moved there in 2011 by the Streetsville Historical Society and City of Mississauga. 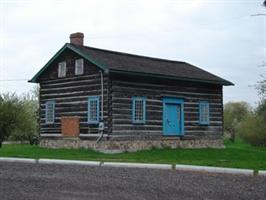 Of course, Donna’s ancestors wouldn’t recognize her neighbourhood today—a community in Ajax classified by PRIZM as Winner’s Circle (well-off, middle-aged exurban families). The description fits her area, she says, with its mix of younger and mature families, and houses surrounded by shady streets, parks and nearby stores. Her home sits only four houses away from a park connecting to Lake
The Leslie Log House was built by one of
Donna’s ancestors in 1826. It is now restored
and located in Mississauga.

Ontario. “I can sit in my backyard and hear the clink of aluminum bats,” she says. “And it’s only three miles to the golf course where all you see are trees and the river, and you only hear the birds. And then I’ll go to this little family owned Italian bakery in Pickering for lasagna that melts in your mouth and an awesome cappuccino. Everything is so close.”

Like many of her neighbours, whose interests according to Social Values research include a desire to leave a legacy, Donna feels a strong pull to community service, a pull that might have something to do with surgical tubing. She donates blood to Canadian Blood Services every other month—now 86 times and counting. “It’s my way to give back,” she explains. “I started giving blood when I was a young girl and I just continued doing it.” Imagining all the ways and all the people she has helped through her blood donations give her great satisfaction.

In fact, the word “lifeblood” might be the most fitting description for the person who keeps everything at EA operating in tip-top condition. And despite a long career in the business world, Donna is not about to retire to the golf course and her poodles. “This is my favourite job,” she says as she sits at her pin-neat desk, surrounded by orderly files and a schedule of Blue Jays’ games. “With all of the history between me and so many others, it turned out to be my dream job.”