Geek Of The Week: Tony Bursey

Every morning, Tony Bursey takes his life into his hands just to get to work. As one of Environics Analytics’ hearty bike commuters, the Senior Developer pedals more than 10 kilometres each way to the office, dodging cars and buses along Toronto’s sometimes mean streets. Not long ago, a BMW sideswiped him as the driver sped past to make a left turn from a right-turn lane—“my scariest moment commuting,” he says recalling how the car’s mirror clipped his arm and nearly threw him to the ground.

But Tony’s not about to trade in his bike for the safety of a subway car or bus. His daily ride is part of the 200- to 300-kilometre per week roadwork of a serious cyclist. He first got into biking nearly 20 years ago when a colleague from his then employer, Compusearch, invited him to ride in a 12-hour endurance race along the trails of the Kelso Conservation Area. Despite riding a clunky $250 bike while his friend cruised atop a sleek $4,000 model, Tony kept pace with the veteran racer. 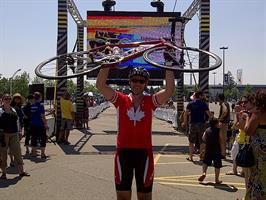 “Ever since then, I’ve been bitten by the mountain biking bug,” he says. “It’s as much about the camaraderie with other riders as the physical challenge. When you’re out there, everyone is having fun.” Or at least as much fun as you can have participating in a grueling race over rugged terrain in places like Hardwood Hills in Barrie and Albion Hills northwest of Toronto. In recent years, he’s participated in a half-dozen 24-hour races while raising thousands of dollars on charity rides that benefit the Canadian Diabetes Association and cancer research at the Princess Margaret Hospital—the charity closest to his heart. He joined that cause after one of his sisters was diagnosed with breast cancer before she turned 40; she’s now 43 and in remission.

That drive and determination are typical of Tony, who’s rarely met a challenge—physical or intellectual—he doesn’t relish. The veteran software designer and developer boasts nearly twenty years of experience in geodemography, market analytics and statistical analysis. At EA, he helps develop micromarketing applications—including those for the popular ENVISION platform—and online tools for delivering census data and other information products. He describes his job in minimal terms: “I try to come up with software applications to help people do things better and more efficiently.”

But accomplishing that goal can get complicated. He once helped Peter Miron automate the process of downloading hundreds of files from the Canadian Revenue Agency to help produce EA’s WealthScapes dataset. “That saved him about two weeks’ worth of work,” says Tony modestly. To assist Tom Montpool in gathering information on school locations, he wrote a program that accessed the home pages of hundreds of schools and then they used Alteryx to retrieve address and other information about the schools off their sites. 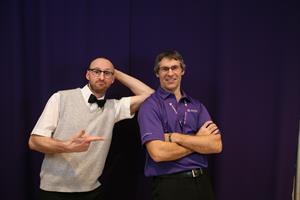 Tony was one of the key members of the so-called skunkworks development team that came together to build ENVISION in 2008. Although he contributed to a number of modules, he’s most proud of the group-sharing feature he created that allows users within an organization to share their work, like trade areas, maps and target groups. “There wasn’t anything like it in other micromarketing tools that we were using,” he says. “What I liked most about building ENVISION was the challenge it presented. When it was initially launched, I heard how people were using it and it opened my eyes to new enhancements. It is a dynamic work in progress.”

Tony earned his Geek credentials early. He started tinkering with a Commodore Vic 20 when he was only six. By age 10, he was creating dice-rolling games for “Dungeons and Dragons” on his Commodore 64. The grandson of Czech immigrants and Newfoundland natives, he grew up in middle-class Scarborough as the oldest of four siblings—and the only boy among three girls. His mother was an administrator at a retirement home, while his father was a salesman for a shipping transport company who did home renovations on weekends. Tony would occasionally help his father with carpentry work. “My father’s handy side rubbed off on me,” he says.

But Tony’s gifts don’t stop there. At age 11 he was recruited by St. Michael’s Choir School to join its world-renowned choir. In addition to attending classes at the private, all-boys Roman Catholic school, Tony sang alto, and later tenor, in the group which travelled to Great Britain for performances. At the same time, he studied classical piano and achieved the Royal Conservatory of Music’s Grade 8 level of proficiency—only three rungs shy of the top level.

Tony went on to study computers and mathematics at Trent University, but after two years he transferred to Ryerson University and switched to applied geography. He also managed the business school’s computer lab where, one day, a business marketing student came in to interview for a lab advisor position. Barbados-born Rachel Edghill got the job, and four years later, after both graduated from the university—Tony with a Bachelor of Science in Applied Geography—they married. Four children and 17 years later, the college sweethearts are deeply into family and Rachel enjoys her role as Mum and Undisputed Boss. 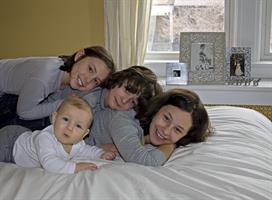 While still at Ryerson, Tony performed some project work for Compusearch, and upon graduating, he was hired and eventually became the company’s Director of Website and Online Development. At Compusearch, he worked alongside current EA executives like Jan Kestle, Tony Lea and Gary Wood. In fact, he and Gary Wood developed MarketMath, a groundbreaking application that provided insight into the demographic and purchase characteristics of any geographic area in Canada. Although the tool has been retired for several years, he still gets compliments about it at marketing and programming conferences.

In 2002 Tony moved on to MapFusion, an Internet mapping company that offered real-time tracking solutions for transportation and shipping companies. He worked there for five years as Manager of New Product Development until 2007 when he re-joined several of his former colleagues who’d formed Environics Analytics, becoming the 24th employee and in-house technological jack-of-all trades. He designed three versions of the company website and created the unifying treatment for all of EA product logos. More recently, he prepared the half-dozen datasets now featured in Esri’s Business Analyst software.

“The secret of being a good software developer is always having a desire to learn something new,” he observes. “Once you stop having that desire, you’re limiting yourself.”

Away from work, Tony has the exhausting distinction of having more children than anyone else at the company. His four kids range in age from 14 to 2-1/2, and as in Lake Woebegone, each seems to excel in some way. Hannah, 14, and Sebastian, 12 are both in gifted programs at school; Isabella, 10, begins an enriched French program in the fall; and the toddler, William, appears to be in training as a superhero. “He runs around in a Spiderman costume with a Superman cape,” says Tony.

“They’re great kids, and people always comment on how polite they are,” he continues. “In Barbados, people say, ‘they got good broughtupsee’ —meaning that they have been brought up properly with the right values. That’s the way they are.”

The family lives in the Golden Triangle section of Toronto, a neighbourhood near the Leaside Bridge that’s classified Continental Culture, according to the PRIZM segmentation system. With his Czech background and Rachel’s Barbados roots, Tony concedes that their household fits the demographic profile: younger, multi-ethnic homeowners who are university educated and white collar. “When I think of our neighbourhood, it’s a real mix of Hungarian, Greek, Ukranian and English-Irish households,” he explains. Like other young families, the Burseys engage in child-centric activities, spending leisure time at home, visiting family and vacationing at the family’s cottage up north.

But Tony even takes his job as a father to the next level. He built a playhouse in his backyard that’s the size of a small apartment: Six feet by ten feet of finished pine with a peaked roof, triangular windows, lighting and electricity. When a cousin first saw the sturdy structure, he remarked, “That thing could withstand a hurricane.” 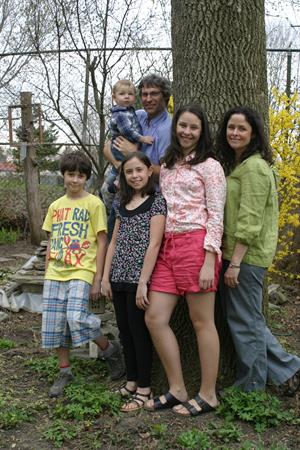 And Tony continues to perform with the St. Michael’s Alumni Choir, singing baritone in several concerts a year. He enjoys staying connected with other choir alums, whose ranks include Kevin Hearn of Bare Naked Ladies, Andrew Craig, a music director of CBC, Michael Colvin, an internationally known opera singer and Matt Dusk. “I’ve always wondered that, if I’d continued with music, I’d have followed a similar path,” Tony muses. One legacy of his music training is his eclectic taste in music. He enjoys just about every genre—from Gregorian chants to alternative rock—“everything but death metal,” he concedes.

But such pleasures take a back seat—if there were one—to cycling. He particularly enjoyed the last two Rides to Conquer Cancer—204-kilometre treks from Toronto to Niagara Falls. Tony had never biked more than 50 kilometres in a day, but he found himself energized by the stunning views from Hamilton Mountain on his first ride. “As we rode into Mohawk College in Hamilton, the streets were lined with people cheering us on,” he says. “An announcer called each rider’s name as we crossed the finish line. Riding in this beautiful setting for such a good cause was truly an emotional and fulfilling experience. I’d never experienced a feeling like that before.”