A Different Shade of "Safe": A Guide To Segregated Funds in WealthScapes

As part of our continued upgrading of our data products, we added a number of enhancements to WealthScapes for its 2013 release. The two most visible enhancements provide greater detail for the end user: an increase in the number of household income classes and the differentiation between mutual funds and segregated funds.

The first enhancement is an increase in the number of household income categories, with six income categories now above $100,000. This enhancement brings WealthScapes 2013's income ranges in line with those found in AgeByIncome 2013 and DemoStats 2013. The second enhancement is an increase in the product granularity of household liquid asset holdings: the separation of "segregated funds" and "mutual funds". In prior WealthScapes releases,  the old mutual funds product category was defined as "mutual and segregated funds" whereas now the dataset has subdivided these two products. The joint pool of holdings in both mutual and segregated funds is now called "investment funds". All three of these product groups have both an incidence of household holdership and an amount of holdings, and they’re further broken out by those holdings within a registered savings plan (RRSP, RRIF, LIRA, etc.) and outside of a registered savings plan (including those funds held in a TFSA). 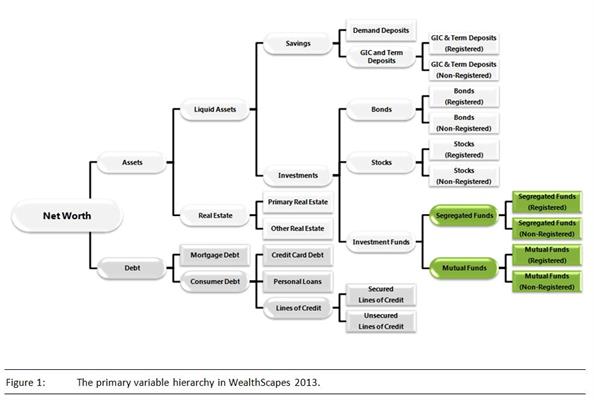 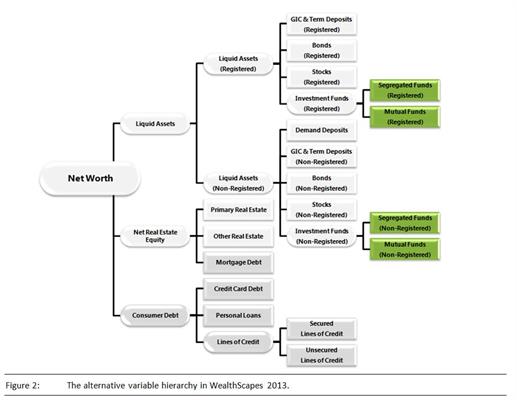 "Wonderful," you might say, "but what is a segregated fund, anyway?"

In the financial industry, segregated funds are commonly referred to as "mutual funds with an insurance policy wrapper" and they’re very similar to U.S. insurance industry's "separate accounts". Generally, Canadian households hold about 2/7 of all their investment funds in segregated funds, accounting for a non-trivial amount of $226 billion as of December 31, 2012. In many aspects, segregated funds are identical to mutual funds: they consist of a pool of bond, corporate paper and stock securities from which they derive their value; they can be held within tax sheltered plans (RRSP, TFSA, etc.); and all of the income earned within the fund flows to the investor in the form it was earned (although segregated funds report capital losses as they are incurred). 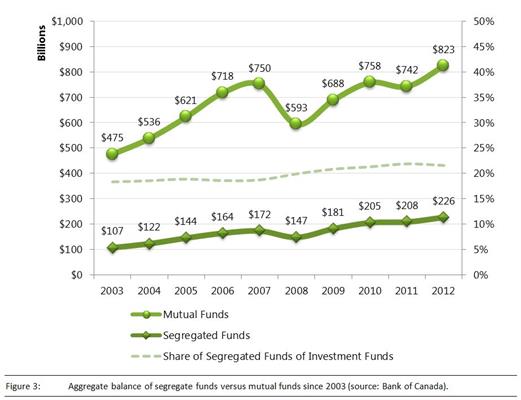 Additionally, because segregated funds are insurance contracts, they also potentially offer creditor protection where the named beneficiary is a member of the family (spouse, parent, child or grandchild). While historically this has been a major advantage for investors with significant liability exposure (including many business owners and professionals), changes to the Bankruptcy and Insolvency Act that came into effect in 2008 provide a degree of creditor protection for assets held in a RRSP, RRIF or other registered plans. Accordingly, the new rules make this feature somewhat superfluous and only applicable to non-registered holdings.

Alas, unless you are eating with your parents, there is no free lunch; all of the benefits of the segregated funds come with a cost. Generally, segregated funds have a higher management expense ratio (MER) than comparable mutual funds. The higher MER is required to pay for the cost of the insurance policy aspect of the contract and, should investors need to withdraw their funds prior to maturity, they will lose their maturity and death guarantees, and they may trigger a penalty.

"Great", you might say, "but why did we add this distinction in WealthScapes?"

This additional distinction can add an additional flavour to any indicator of "financial conservatism". When working with WealthScapes, the ratio of savings and bonds to investment funds and stock is commonly used as an indicator of how financially conservative the investors are. Due to their guarantee of return of principal (or a ratio thereof), adding segregated funds to the savings and bonds numerator of this ratio, while using mutual funds and stock as the denominator, produces an alternative "financial conservatism" indicator ratio.

At the same time, all calculations done using "mutual funds (including segregated funds)" from previous versions of WealthScapes can still be done using "investment funds".

As always, should you have any questions about using any parts of WealthScapes in your analysis, please contact your Environics Analytics client advocate. We would be happy to be of assistance.