Geek Of The Week: Martin Mak

Martin Mak came to be a statistician not by choosing a profession, but by picking out his best skill. He felt comfortable in the world of numbers; to him, they just made sense. “Studying mathematics was a simple decision,” he says, “because numbers produce a definite answer and rarely leave a question open.”

His affinity for numbers became evident during his school years in Hong Kong. Like many young children, Martin wanted to become a doctor, but he found the sciences challenging, and he faced stiff competition for one of the few spots in Hong Kong medical schools. Instead, he stuck to his strongest subject—mathematics.

For Martin, mathematics is both logical and reassuring, rarely leaving questions unanswered. “It’s based on a blend of assumptions and reasoning, and the results are definite,” he says. He sees the social sciences as somewhat subjective, with their analysis coming from many angles, often producing even more questions.

However, Martin concedes that mathematics does leave the odd question open for discussion. “Most of the time, one plus one equal two. But sometimes it doesn’t. For example, take one jar of water and add another jar of water to it, and you still only have one jar of water,” he observes (when the first jar is much larger than the second). “Sometimes even mathematicians can’t classify right or wrong, true or false.” 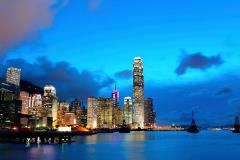 But this Senior Statistician with EA’s Custom Research team sees pleasure in life beyond simple mathematics. Born and raised in Hong Kong, Martin enjoyed what he calls a typical childhood in the densely populated metropolis. He studied hard and played a few sports. “As young boys, we played Ping Pong. It was a way to release our energy, and our games became very
Hong Kong at night.
competitive,” he says. But it was during a trip to Victoria Harbour that Martin found the pleasure of a less competitive leisure activity--fishing. “When I was young I joined a club at school to learn all I could about fishing,” Martin remembers. “At the end of the season, our class took a fishing trip out into the harbor and we caught lots of fish. The biggest one we caught was over a foot long–and that’s no fish story.”

Martin explains that fishing is popular in Hong Kong because it’s easily accessible and can be enjoyed by all types of people. “Hong Kong is known for its abundant shopping but it’s also an island surrounded by harbours,” he says. “You can cast a line along the many jetties and wharfs where there are lots of smaller fish.” But Martin also appreciates the broader aesthetic value fishing—as a source of solace and peace, as well as a chance to get back to nature. “People can relax and enjoy nature when fishing,” he says, “the water, the fresh air and, of course, just watching the fish.” 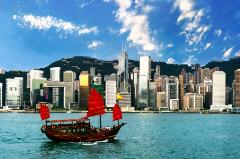 Martin’s journey from young mathematician to statistician working on some of Canada’s most renowned consumer research databases would rival any fishing expedition. After completing a master’s degree in mathematics in Hong Kong, he immigrated to Canada with his parents and siblings in the mid-1990s. In 1998, shortly after completing a master’s degree in
One of the many harbours of Hong Kong.

statistics at the University of Waterloo, he saw a job posting at the university that led him to the Generation5 website. “They were looking for a statistician who could manage and update their market research databases,” he recalls. “At that time, Generation5 consisted of only a handful of people.” Martin fondly recalls those early days of Generation5, when he worked with a tight-knit group including Jeff Li, Xianping Li and Michael Vainder. All had joined the company in the late 90s and came to Environics Analytics together several months ago. “We have worked many years together and been through the various companies who owned Generation5. We just kept working through the changes.”

Despite his love of fishing, Martin has no equivalent “big fish” stories regarding his experiences on the job. In fact, he humbly reports that any successes he’s had were the result of a team effort. “I enjoy working with my colleagues and helping them to be the best at their work.” His colleagues agree. While many regard him as self-effacing and unpretentious, Martin is known to be thorough in his work, detail-oriented, very helpful to others and the “go-to-guy” on the team for his SAS expertise. He’ll often work long hours to complete a job—no matter when. ”If we need something finished, Martin does it,” says Michael Vainder, Director of Data Analytics at EA. “After a long, busy week, we’ll come in on Monday and, there it is—done.”

While some may think the work of a Senior Statistician is complex and mysterious, Martin disagrees. “There is no secret to the job,” he says. “You just try to do your best based on your knowledge and experience, and that is all there is to it.”

Tucked in the back right corner of the
Environics Analytics boardroom at 55 York Street,
Martin with his Generation5 colleagues

Martin lives in the Toronto suburb of Agincourt–an area that PRIZM classifies as Newcomers Rising (an urban neighbourhood of young, downscale city immigrants). “I live on the top floor of an apartment building,” he notes, “and when I take the elevator, I see everyone. Most people seem to be from Asia and places like mainland China, India and the Philippines.” He adds that the mix of mostly newcomer Asian immigrant singles and families creates a sense of community in the building and, in the absence of their families back in their homeland, people seem to help each other out. Like his neighbours, he treks to nearby Agincourt Mall, which on weekends buzzes with many people from different cultures shopping for familiar brands, technology and groceries. He enjoys wandering the shops, taking in a good meal, getting some exercise and just people-watching. 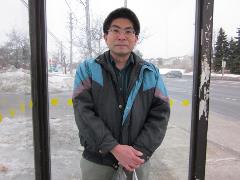 While work and life can sometimes seem overwhelming, Martin’s pragmatic philosophy can be summed up in a quote from sportsman-author Charles Waterman: “Most of the world is covered by water. A fisherman’s job is simple: Pick out the best parts.” With a positive attitude, obvious expertise and focus on helping colleagues and neighbours, Martin has no doubt picked out the best parts of life. And given all his successes, it seems the fish are biting.