Geek Of The Week: Nigel Pleasants

As a teenager, Nigel Pleasants wanted to be England’s answer to Bob Dylan. Of course, in Watford, England, where Nigel grew up, a lot of teenagers wanted to be the next Bob Dylan. And one of them did challenge the celebrated American singer-songwriter, a bloke who played at the same clubs as Nigel named Don Leitch. Audiences on both sides of the Atlantic came to know him by his stage name, Donovan, and his string of hits like “Mellow Yellow” and “Sunshine Superman.”

Fast-forward many years and, well, Nigel still wants to be Bob Dylan. Although his day job is Vice President of Strategic Partnerships at Environics Analytics, he typically spends at least one night a week performing at a Toronto-area bar or café, singing his own songs in his husky baritone while picking his vintage Martin acoustic guitar. “Last week I was introduced at a gig as the guy who looks and sounds like Gordon Lightfoot crawling out of a train wreck,” he laughs.

Over the years, he’s filled innumerable notebooks with scribbled songs, mostly about love and relationships, and released seven self-published CDs. But these days, he finds more joy in live performance.

“I call myself a singer-songwriter, but until a few years ago, the writing was more important,” says Nigel. “Now I like to sit on the stage and perform because the adrenaline rush is indescribable. It’s addictive. Once you sit on the stage and hear people clapping, it feeds the ego enormously. It’s quite shameful.” 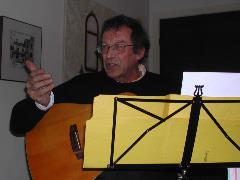 While his moonlighting adventures may sound far different from his day job, Nigel begs to differ. “They’re both demanding and fun,” he says. Because his work involves developing new data distribution partnerships for EA, he spends most of his time trying to satisfy company partners—occasionally, a tough audience. But Nigel maintains that dealing with clients is his favourite part of the job: “I try to treat them with respect and charm and make sure that doing business with us is an enjoyable experience,” he says. “Like any sales person, I’m interested in seeing if I can outdo our revenue target. But at this stage in my life, I see the job as more of an intriguing intellectual challenge to help people make their business work better.”

Nigel, who describes his role as “like a fifth practice leader,” explains that any success at partner sales requires well-honed people and communications skills. However, he’d never be mistaken for an old-fashioned, back-slapping salesman. “I’m not a person who sends birthday cards to the partners’ children,” he says. “In my youth, sales involved more practical joking and frivolity. There were long lunch hours with more beer than I want to remember. It was more relaxed and sloppy. I prefer it today with a five-minute sandwich and then back to work. I am more interested in spending my time trying to understand people’s needs.”

Nigel developed his hard-working, less-small-talk approach from a middle-class upbringing in England. The son of a chemical engineer father and a homemaker mother, Nigel was raised in Watford, about twenty miles northwest of London. Lacking serious academic ambition—“I was an intelligent student with a bad attitude,” he recalls—he gravitated to music and folk singing. But he soon realized that he possessed, in his words, “neither the talent nor the chutzpah” to be a Dylan or a Donovan. “So when I saw that my older brother in the advertising business was driving fast cars and wearing snazzy clothes,” he says, “I decided to do the same thing.” 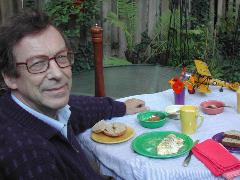 Along the way, Nigel collected stories from his years in the turbulent agency business. He was at BBDO when one of its major clients was Chrysler, then going through bankruptcy and revival under the leadership of CEO Lee Iacocca. “If he hadn’t pulled that off, we would have gone out of business,” Nigel says. While at The Globe and Mail, he discovered the challenge of manufacturing, distributing and promoting a new product every day. “It was a shock at how quickly decisions were made,” he says. “They weren’t pondered for months but in a matter of hours.”

In 2010, Nigel found his way to EA after developing a neighbourhood-level database on spending in the gay community, a database which was subsequently branded by EA asGaybourhoods. A year later, when EA President Jan Kestle described her fast-growing company’s need for an executive to oversee the increasing number of partners, Nigel accepted the newly created position of Vice President of Strategic Partnerships.

"For me, making music is a passion and I just write whatever the hell I like.”

Since then, Nigel has worked to help generate revenue by both selling EA products to partners and encouraging them to re-sell EA offerings to their customers. And while the pace may be slightly slower than the daily deadlines of a national newspaper, Nigel observes that the sheer volume of EA’s offerings poses its own challenges. “We have an enormous range of products and sub-groups of products that can be customized for a client,” he explains. “DemoStats isn’t really a single offering but an unlimited number of products with various price points. You have to develop a mindset that the data can be packaged any way a client wants.”

To handle the workload, Nigel says that he trusts in the kindness of colleagues. “It’s a great privilege and pleasure to work with the wonderful staff at EA,” he says. “I learn from everyone I meet in life, but I especially learn from younger staff members, who have fresh ideas and different perspectives. Curiosity is an important personal trait, and they teach me new things every day.”

While some people seek ways to put boundaries around their work world, Nigel embraces both work and home life with equal passion. “I’m one of those people who doesn’t think it’s unhealthy to blend work and home life,” he explains. And while music is always a part of his life, his other interests can be just as all-consuming. He especially enjoys gardening, cooking healthy fare and reading. A book-lover who puts most bibliophiles to shame, he’s read every book that’s ever been a finalist for the Man Booker Prize—more than 500 novels. When he gets hooked on a writer—say English novelist Ian McKewan or Jewish-American author Isaac Bashevis Singer—he’ll read everything the author has ever written. “I don’t read how-to management books,” he notes. “I love novels.” 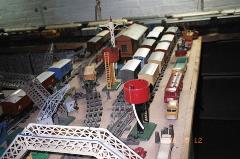 Nigel owns perhaps the largest collection of Hornby toy trains in North America, including pre-World War II models he first played with as a child.And then there’s the dishes. Several years ago, when a girlfriend moved out, she took back her small collection of Fiestaware dishes. Nigel had grown to like the iconic, vibrant-hued

ceramic dinnerware produced in West Virginia since the 1930s. Within a week of the split, Nigel bought 20 pieces of Fiestaware. Within a year, he had acquired 500 pieces, some of them highly collectible. “If I were on a psychologist’s couch, she’d probably say that it was a competitive thing,” he says. “You know, ‘anything you can do, I can do better.’”

And did we mention the antique toy trains? He began collecting the pre-World War II trains made by Hornby, an English company, as a child, and then returned to the hobby about 20 years ago. Today, he owns some 50 locomotives, has 500 feet of track snaking through his basement and claims that he possesses “probably the largest collection of Hornby toy trains in North America.” He admits he once bought a 1938 locomotive for $3,000, but insists that purchases like that are rare. “I collect stuff,” he shrugs, “and when I collect, I’m obsessive.”

When it comes to his hobbies and passions, Nigel says money is never part of the equation. He collects for pleasure, not investment, and he includes his music in that same vein. He has no agent, books his own gigs and always plays for free. “Making money from music is very difficult, and I would probably end up selling out with compromises,” he says. “So for me, making music is a passion and I just write whatever the hell I like.” And that attitude seems to colour Nigel’s life—a data-selling singer-songwriter who collects old toy trains, Fiesta dishes and novels like others collect Twitter followers. For Nigel, it’s all about the passion.