By the fourth day, I’d forgotten what city we were in. And I wasn’t alone in my befuddlement. That morning as I walked through our hotel lobby, I found Doug Norris, Environics Analytics’ Senior Vice President and Chief Demographer, surrounded by a sea of suitcases. “So what day is it?” he asked wearily.

“Thursday, I think,” I replied. “And if it’s Thursday, we must be in”—come on, you can do this . . . you know the itinerary—“Calgary. Yesterday was Edmonton and tomorrow is Winnipeg.” I felt triumphant, even though this simple answer had taxed my brainpower to its limits.

Of course, becoming a little punchy was to be expected as we were wrapping up EA’s 2014 road show, a whirlwind tour of seven cities in ten days across four time zones. The itinerary included an eastern swing to Ottawa, Montreal and Halifax, as well as a western trip to Vancouver, Edmonton, Calgary and Winnipeg.

While I blamed my jetlag on the busy schedule, I couldn’t deny the logic behind the road show. When Jan Kestle launched EA in 2003, she chose to concentrate the staff in Toronto to create “a critical mass of technical expertise,” as she told audiences in her remarks during this year’s road show. But without satellite offices in other cities, EA staff must hit the road regularly to visit clients and prospects in far-flung locales and make presentations at industry conferences in cities all over the country. So last week, a small slice of EA’s critical mass was concentrated in various airport waiting areas and hotel conference centres. 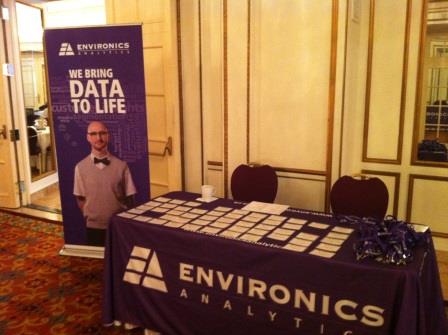 This year’s road show—the Environics Analytics Breakfast Briefing—was actually a two-and-a-half-hour seminar dedicated to data-driven marketing. Jan opened with a presentation on using analytics as a foundation for strategy. Doug followed with a discussion of the changing demographics in Canada—with findings from the 2011 Census and National Household Survey customized to each city—and the implications for marketers. Jack DePoe and I, representing the marketing team, introduced our new CensusPlus database and described how our datasets could help customers solve their business challenges. Then several customers and practice leaders presented case studies—featuring Alterna Savings, Arc’Teryx, Parks Canada and Steinbach Credit Union, among others—to illustrate EA’s data-driven marketing techniques at work. At the end of the presentations, EA staff members Micheline Kuepfer, Lefty Papachristoforou and Emily Anderson provided demonstrations of ENVISION.

And the show seemed to play well to the out-of-towners. Some 200 customers and prospects attended the seven seminars—more than half the number who typically attend our fall user conference. In Vancouver, engaged attendees peppered our speakers with questions throughout their presentations. In Edmonton, participants stayed an extra half-hour to watch Emily show off ENVISION’s many features. And the Calgary session concluded with attendees hunched over linen-draped tables in three separate corners of the room, discussing projects with practice leaders Catherine Pearson, Michele Sexsmith and Rupen Seoni. Several discussions resulted in hard leads and pending deals. 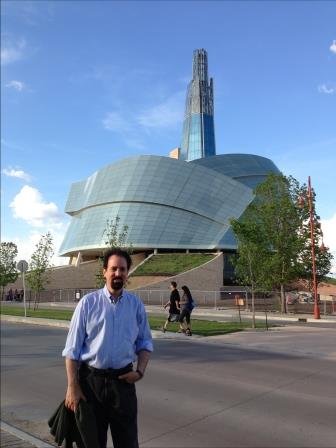 But I have to admit that it wasn’t all work. A road show is a bit like a travelling circus—right down to stuffing an inordinate number of people into one tiny cab. Close quarters and constant contact allowed me to see another side, a quirkier side, of my colleagues away from the workstations of 33 Bloor Street East. There was Jan tearing through the bookshop displays at the Vancouver Airport, searching for a work of compelling new fiction as long as it was a paperback small enough to fit into her overstuffed handbag (Mr. Penumbra’s 24-Hour Bookstore fit the bill). Cath could barely

The author at the not-yet-opened Canadian Museum
of Human Rights in Winnipeg.

settle into an airplane seat before reaching for the Sudoku puzzle in the Globe and Mail; on the 90-minute flight from Calgary to Winnipeg, she finished it with time to spare. Doug agreed to sit for a Geek of the Week interview, insisting that his uninteresting life would warrant only a brief conversation; one hour later, he was still regaling us with his stories. Then there was Marketing Manager Julia Vasilev, tourist extraordinaire, who insisted on walking the streets of every city shooting urban scenes with her cell phone camera. Despite her expeditions, she was always the first to arrive at 6:30 AM to ready our conference room and make sure there was marketing material at every seat.

Of course, not everything ran like clockwork. At the ultramodern Hotel Le Germain in Calgary, nearly all of us arrived a bit late to the conference room because we couldn’t figure out the futuristic shower handles—inexplicable chromium squares on either side of a faucet not correlated to hot and cold. One night in Winnipeg, Catherine led a group through the windy streets to a riverside restaurant for a leisurely dinner—until waves of mosquitoes enjoyed a feast of their own on our exposed arms and legs. And sometimes, we just went nowhere. In one forgotten city, we met for a late afternoon drink to discuss where to go out to dinner and after an hour of chatter and several drinks, we still had no consensus so we stayed put. Afternoon drinks turned into a five-hour meal. 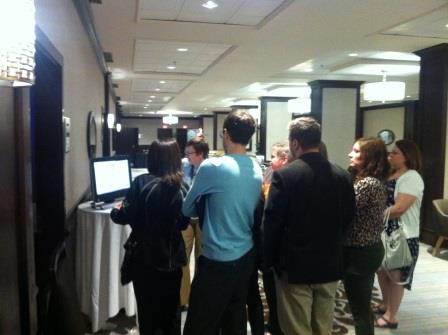 Despite the minor hiccups, most of my fellow travellers agreed that the 2014 road show was a success, and there’s already talk of next year’s grand tour. With tight marketing budgets that preclude many people from attending our Toronto user conference, it makes sense to bring a piece of EA to out-of-town customers. And while Jan has proposed some regional user conferences in select cities, the road show, like any good circus, never closes its curtains for long. I’m game—as soon as I find my passport and figure out what day it is.