Geek Of The Week: Amanda Manning

During a particularly complicated project for a client in the financial, insurance, telecommunications and travel practice (FITT), Amanda Manning recalls trying to synthesize a large amount of data into a two-page report—one of many elements in a sprawling project. The client wanted a different perspective on the data so her team developed a new approach using trade areas to present the information.

“It wasn’t a rosy picture,” Amanda recalls. “There were lots of last-minute changes, challenges and late nights. But our team never gave up until we had something we were proud of that met the client’s needs. It was really exciting to see us learning from each other as the project grew.”

The experience reminded Amanda of why she likes being on a team—and not just at work. For the past twenty years, she’s played on a variety of ice- and-ball-hockey teams, and this year she joined the client practice team at Environics Analytics—an all season-player who knows that a mix of strong skills, a supportive atmosphere and a passion for the work makes for a winning organization.

“I love being on a team,” Amanda admits, as if there were any doubt. “When everyone is contributing their own special talents, putting in the extra effort and supporting each other during the rough patches, it just clicks. It’s a great feeling to be part of a team that values hard work and won’t quit until the job is done well.” 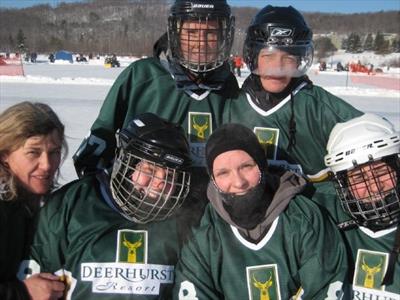 Before joining EA as a Client Advocate on the (FITT team, Amanda never imagined she would work in market research. “My mom works in long-term care for seniors, I have a psychology degree and I’ve worked with special-needs kids,” she says. “I figured I’d end up working in some kind of social services job.” But while enrolled in the Research Analyst Program at Georgian College in Barrie, she met Michele Sexsmith, EA’s Vice President and leader of the retail, media, real estate and entertainment practice, who had come to address a class about demographics and consumer profiling. “I didn’t realize how much demographic research could help companies learn about their customers and make an impact on business,” she says.

Amanda introduced herself to Michele, who put her in touch with one of EA’s client advocates for help with a school project on building awareness for a homeless shelter. After graduating in 2012, Amanda worked as a research associate for a social services organization, but she soon realized she missed using some of the quantitative skills she’d learned in school and employed on the shelter project. So she applied to EA and joined the FITT group. The shift to market research has been a big change for Amanda, but she appreciates the new intellectual challenges. “I can’t believe what a learning curve it’s been since I joined Environics Analytics, discovering new processes and so much information,” she says. “I guess it’s a good thing I like learning. It just doesn’t stop and now I’m hooked.”

During her eight-month tenure at the company, Amanda has also learned a few things about the analytics business, particularly using segmentation to help clients better understand their customers. First and foremost, she explains, is the need to be open-minded when starting each project. “You can’t make assumptions about the client’s business,” says Amanda, “because you have to be open to possibilities that might not seem obvious from the start. Each project is so different from the last one that it’s a bit of an adventure.” 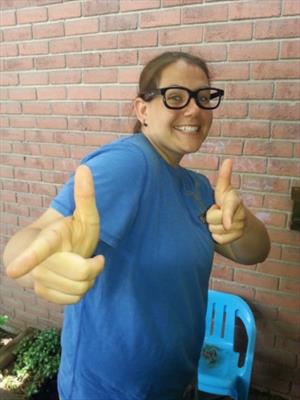 Amanda showing her true Geeky side.

Born in Newmarket, Amanda spent most of her early years there, apart from a short period in Barrie. She says she grew up in a typical middle-class home with her parents and older brother. Her mom, Patti, works in the senior care sector as a Provincial Director and Amanda’s stepdad, Steve, is a mechanic with Air Canada. Her brother Chris works as a manager at a restaurant in Barrie.

Although Amanda was a fairly good student at school, she lived for sports. When she was seven years old, her grade two teacher suggested she try hockey, and Amanda joined a few community teams. With women’s hockey emerging as a regional force, she credits her stepfather with encouraging her interest by helping establish the Aurora Panthers league as part of the Central York Region Hockey Association. The local high school asked Amanda to join the team, even though she was only in grade eight.

During the twenty years Amanda’s been playing, tournaments have taken her to towns throughout Ontario, across the border to Connecticut and even to Toronto’s Maple Leaf Gardens. Her high school team competed at OFSSA (the Ontario Federation of Secondary School Association), and while playing for the Panthers, she participated in the Ontario Winter Games in Sault Saint Marie in 2000. Ask her about her most memorable hockey tournament, and she’ll tell you about a frigid January weekend in 2008 at the Canadian National Pond Hockey Championships in Huntsville, Ont., where hockey players were tested by particularly harsh weather. The annual event draws hockey teams from all over North America and Europe to play a series of four-on-four games on a huge pond at the Deerhurst Resort.

“We played hockey like it’s traditionally meant to be played – outside,” Amanda recalls. “And that weekend it was so cold we had to wear balaclavas [ski masks]. But our masks and eyelashes still froze. We call it ‘hand-warmer-in-gloves hockey.’”

Amanda’s parents were active volunteers in the Panthers league, so it’s no surprise that her social life revolved around hockey, too. Most of her weekends were spent on a bus heading to a tournament—with teammates, parents and siblings—so all the players’ families became close. With her birthday often coinciding with an annual tournament in Hamilton held during Christmas break, she always had teammates around to celebrate with her. But after attending university, she moved out on her own and switched to ball hockey. “The cost for ice hockey was too expensive, especially once my parents quit paying,” she says with a smile. “So I made the switch. Now I play defense for the Aurora Renegades and the Barrie SNT Fury.” 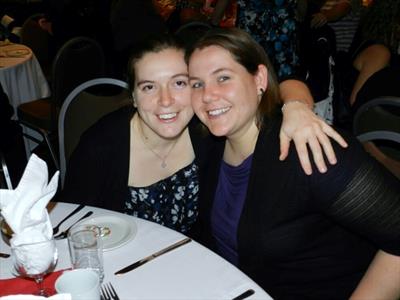 Currently, Amanda rents part of a house in Newmarket with her partner, Katrina Dobson, and their two cats, Tuff and Spencer. PRIZMC2 classifies their neighbourhood as Lunch at Tim’s (lower-middle-class, mature and young in industrial communities), and according to Amanda, it’s an apt description of the mix of young folks and retirees. “And there’s plenty of Tim Horton’s around,” she adds, which is typical of the segment. Katrina also works downtown as a researcher so the two commute together. Weekends are spent browsing local farmer’s markets for fresh produce, playing hockey and hanging out with the ball-hockey gang. The couple also enjoys cooking dishes like zucchini lasagna or new creations such as cauliflower crust pizza. Katrina chops, Amanda washes dishes and both get into the house cleaning. A favourite pastime is hiking in nearby conservation areas where Amanda can pull out her camera and capture the landscape and wildlife.

Recently, while wandering through Fairy Lake Park, Amanda and Katrina admired all the frolicking dogs, and both agreed that they would love to add a dog to their family. They also talk of one day buying a farm, although they’re not quite ready for that stage. For Amanda, that dream farm would include a pond—one large enough for playing ice hockey, and that requires a team. Judging from the work and play life, Amanda will have no problem finding players to join her.