Geek Of The Week: Kevin Hopkins

Mapping His Own Journey

Kevin Hopkins always had a peculiar fondness for maps. While other five-year-olds played with miniature cast-iron cars, he preferred the folded-up roadmaps that came with the tiny vehicles. In high school, he became fascinated with GIS systems during a class field trip to Ryerson University and ended up earning a Master of Spatial Analysis (MSA) degree from the school. Now a Client Advocate in Environics Analytics’ finance, insurance, travel and tourism (FITT) practice, he continues his lifelong love affair with maps—now using them to navigate his own analytics journeys—as he helps clients better understand their customers and markets.

“I really don’t know why I love maps so much,” Kevin admits. “I’ve always been interested in how humans and geography interact. I just like how maps show the interaction with the built environment.”

While many GIS-trained EA staff members share an affection for maps, Kevin’s passion may have emerged at the earliest age. Raised in middle-class Scarborough—his parents both worked at technology companies—Kevin remembers as a kindergartener seeing his first roadmaps tucked in the boxes with those toy cars. But he also remembers hating them. “They usually weren’t good enough for me because of the limited number of roads,” he explains. “So I made my own maps.” His first landscapes consisted of crudely penned road networks on large sheets of paper. But as he grew older he began producing intricately designed street grids and complete cities, and he dreamed of becoming a cartographer or urban planner. 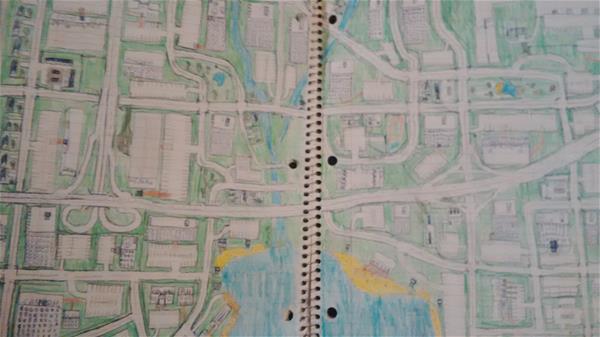 One of Kevin’s hand-drawn maps—in pencil crayon—when he was 13 years old.

Kevin’s career plans changed that fateful day when his high school class visited Ryerson. There he discovered how maps could help address business questions, and the experience opened his eyes to the possibility of a career in applied geography. In 2005, he returned to Ryerson, this time as an undergraduate student in geographic analysis, and stayed on to earn his bachelor’s and master’s degrees from the school.

At Ryerson, Kevin also developed an interest in travel—and in putting his roadmaps to use. As a fourth-year undergraduate, he participated in a study abroad program at England’s Manchester Metropolitan University, where he took courses in geographical and environmental sciences with other foreign students. The experience allowed him to travel around Britain and Europe, and not only gave him an appreciation for different cultures, but also an awareness of England’s fickle weather. “I remember once writing an email to my family,” he says, “and at the end of every paragraph, the weather changed outside. First it was sunny, then rainy, then overcast and then sunny again.” After completing his undergraduate studies in 2009, Kevin toured Europe, visiting 14 countries in five months.

In January 2011, Kevin came to EA following the route of many younger employees, arriving as an intern from Ryerson’s MSA program. After several months conducting research for EA’s WealthScapes database, he became a fulltime Client Advocate in the FITT team. That fall, he earned his MSA degree.

“Being inquisitive is the most important part of my job,” Kevin explains. “There are often many solutions to any problem, so our approach involves a lot of detective work."

These days, Kevin works with Mark Harrison on FITT’s data science team, specializing in client campaign management activities, database management and user interface dashboards. The two often tackle open-ended client questions, such as: Who’s going to respond to this offer? Why are we losing longtime customers? How can our bank acquire and retain mortgage customers? Their solutions typically integrate multiple data sources—like PRIZM, DemoStats, WealthScapes and customer data—with custom modelling. Increasingly, they use data visualization tools to report the results.

“Being inquisitive is the most important part of my job,” Kevin explains. “There are often many solutions to any problem, so our approach involves a lot of detective work. You start with a question, formulate a hypothesis and then see if that’s true. If not, you move on to the next hypothesis until you find your answer.”

But Kevin points out that the analytics are only part of the job. “You also have to know how to tell the story and explain to clients why things are happening,” he adds. “Mark and I liken it to CSI work.”

Kevin also heeds an enduring maxim when tackling a client’s challenges: follow the money. “That may mean analyzing where the money is going or where the money is coming from, who has it, who doesn’t and what they’re doing with it,” he says. “A lot of times, we look at which customers are most likely to do luxury travel, who’s depositing the most money with a bank, or who’s getting a mortgage with a financial institution. Following the money provides a lot of answers.”

Given his heavy workload, Kevin admits that he’s “not great” at balancing work and family life. During the week, he’ll regularly stay late to finish assignments, leaving most of his leisure activities to the weekends. He lives in a condo near Toronto’s Exhibition Grounds, a convenient locale for him to regularly attend music festivals, IndyCar races and air shows. PRIZM classifies the neighbourhood, formally called Fort York, as Young Digerati, which captures the area demographics well, says Kevin. “I’m a university-educated, young professional who owns his own condo and isn’t quite ready to start a family,” he observes. “I check off a lot of boxes in the PRIZM profile.”

Like other Young Digerati, Kevin also qualifies as a serious sports fan, rooting for both the Maple Leafs and Blue Jays. One of his grandfathers taught hockey and played in a few exhibition games for the Maple Leafs back in the 1960s. He introduced his grandson to the sport, and naturally Kevin also took to the ice, first as goalie and then forward. “I prefer to score goals rather than have them scored on me,” he says. 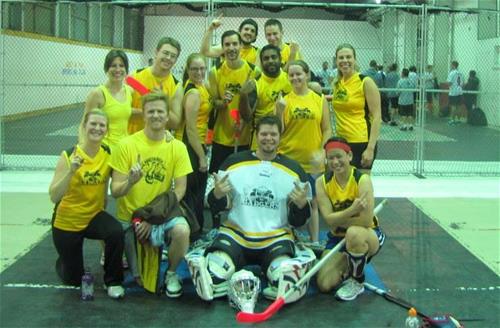 Kevin has also brought his passion for hockey to the office. Several years ago, he began playing in a coed ball hockey league, and he has since enticed a half-dozen other members of EA’s FITT team to join him in games scheduled several nights a week. It’s less violent than the game on ice—the games take place at a gym or community center, and the participants use plastic sticks and balls—but the play is no less intense. “Shins get whacked a lot, and I often come into the office with bruises on my arms from the ball,” Kevin notes. “It’s a badge of honour to show off your bruises.”

Kevin had joined the coed league when he first moved to downtown Toronto as a way to meet new people, but he didn’t realize it would also reconnect him with his past. At one of his first games, he noticed a female teammate who looked familiar. Over drinks at a bar after the game, he finally made the connection. “It was the high school teacher who first took me to Ryerson,” he says. “Talk about a coincidence.”

But Kevin recently discovered there are other ways to meet people that don’t involve getting bashed with plastic sticks. Five months ago, while out walking his rescue dog—a miniature sheepdog and Australian shepherd mix named Larry—Kevin met Lisa Bassett, a young woman from his building, who was walking Joey, her poodle-Maltese mix. After a few “coincidental” meetings, the two neighbours began walking their dogs together. Not long afterwards, Lisa added Kevin to her LinkedIn network and he asked her out. Soon you could regularly see the couple walking their pack—larger thanks to the addition of a Pomeranian, poodle and Pekingese mix named Willy—along the waterfront. “We sound like the Three Stooges as we call out ‘Larry, Willy and Joey,’” says Kevin. 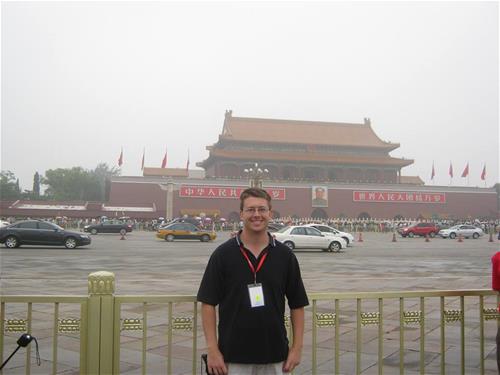 Nowadays, the two supplement their dog-walking ventures by going out to dinner or to a wine tasting, without the pooches, of course. And Kevin remains bitten by the travel—and mapping—bug. He figures he’s already visited most major cities in North America, in addition to tourist and off-the-beaten-path places in the Caribbean and China. During his most recent trip to China, in 2013, he recalls walking down a remote market street one evening in Shanghai, when a Chinese man suddenly threw lit fireworks in the street. “Everyone stopped to celebrate,” he remembers, “me too.”

That kind of authentic, serendipitous moment is what Kevin enjoys most about travelling, and he is already planning his next trips, to Japan, Australia and Brazil. He’s even begun gathering maps for these and other excursions. With an abiding curiosity for the intersection of people and geography, Kevin will always be looking for new roadmaps to conquer and new ways to tell the stories that those maps represent.