'Tis the Season for Entertaining

It sneaks up on us like tax time – the holiday season. And here in Canada, the signs are everywhere. Suddenly, snow tires are no longer optional, shopping trips are more frequent and exhausting, carols blare from every elevator and holiday party invitations are piling up. Fortunately, many of us have friends and relatives who are eager to open their homes and celebrate the festive season. According to a Fall 2013 PMB study, nearly half of Canadian households enjoy entertaining at home, and 62 percent admit they put in extra effort when entertaining and preparing for a family celebration. Add to that the fact that nearly half of Canadian households claim a love of cooking and you’ve got the basic ingredients for a tasty holiday gathering. And what’s not to like about dressing a bit more festively, crowding around the host’s kitchen with old friends while nibbling from a cheese tray and maybe crooning a few bars of “Jingle Bell Rock?”

But if the season is the reason for getting together, it’s the promise of savoury appetizers, a dinner table more colourful than an artist’s canvas and platters of scrumptious cookies, bars and puddings that persist in our memory bank. And the data shows that those stars of the holiday dinner—ham and turkey—remain staples of Canadian cuisine: in the past six months, 48 percent of Canadian households bought ham and 35 percent served turkey. But like the garlands around a Christmas tree, the side dishes can make the meal even more memorable. Depending on tastes and traditions, the trimmings can range from tried and true mashed potatoes, chestnut stuffing and cranberry sauce—favoured by 27 percent of us—to new spins on old favourites like curried cauliflower au gratin and maple syrup-glazed turnips. 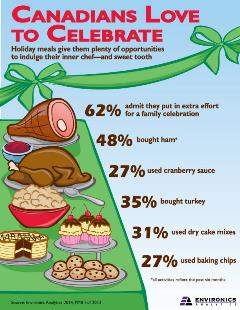 From the fixin’s to the feast, Canadian traditions run deep and, depending on where one lives, a fattened tom turkey or a savoury ham may be the focal point of a family gathering. According to our PRIZMC2 segmentation system, those who choose turkey typically belong to family-oriented clusters like Winner’s Circle (well-off, middle-aged exurban families), Fast-Track Families (upper-middle-class exurban families) and Pets & PCs (large, upscale suburban families). Back Country Folks (older, lower-middle-class couples and families in remote areas) also hold family values in high esteem and are likely to serve a turkey for a holiday dinner. Those who are partial to ham are also inclined to be family-oriented, but tend to have French Canadian roots in PRIZM segments like Villes Tranquilles (middle-aged francophone families and couples), La Vie est Belle (upper-middle-class, suburban Québec families) and Les Traditionnelles (midscale, Québec town families and couples). Members of Le Cité Nomade (downscale, young and mature Québec singles) are also partial to ham feasts. The preference for ham may be linked to the French Canadian preference for using ham or pork to create a number of Christmastime dishes, such as the Tourtiere classic meat pie or the ragout de patte, a stew traditionally made from pig’s feet.

Even the non-bakers among us typically get into the spirit of the season. In fact, in the past month, 12 percent of Canadian households have used chocolate baking squares, and 27 percent have used baking chips, in their cookie and bar recipes—likely sneaking a few from the package first. Baking festive treats for friends is a sure way to put a smile on even the most bah-humbug souls among us. Few can resist a shortbread cookie offered from a passing tray or just one slice of that decadent Canadian treat, a Nanaimo Bar.

Regardless of whether you serve ham or turkey, bake your own or buy your holiday cookies, the season is a celebration expressed through, and memorialized by, the experience of sharing a meal. In our modern tuned-in, online, time-pressed world, enjoying a festive meal with friends and family means we get a chance to reconnect with our past, revive traditions and nourish our relationship with those we love. And even if Uncle Bob’s jokes are corny and the turkey is a little dry, the meal is a filling reminder of who we are.