When I think about sports fans, I tend to think about individuals who are complete fanatics. You know the type: they wear oversized jerseys to work, paint their faces on game day and use any excuse to wear hotdog hats. They’re the ones who swing from subway bars, jump down flights of stairs and wreak havoc after a win…or a loss. They’re your second cousin, the friend-of-a-friend, the forever-bachelor uncle who never stopped drinking frat-boy beer. For the most part, they are the ones you don’t necessarily want to watch a game with.

Did I forget to mention I am a sports fan? I like to believe that I am far more sophisticated than the fanatic-type, but maybe not. When I was asked to write a blog post, my first impulse was somehow incorporate sports into it. In fact, many of the projects I work on as a Client Advocate at Environics Analytics consist of identifying the best customer, the “sweet spot” of a business. Using PRIZM, EA’s segmentation system that assigns Canadians to one of 66 lifestyle types, I decided to try and identify Canada’s top sports fans—if only to find more fans like me.

To begin my search, I concentrated on three popular North American sports at the professional level: Major League Baseball (MLB), the National Basketball Association (NBA) and the National Hockey League (NHL). Each of these organizations draws a large fan base and consists of teams in both Canada and the United States. I selected English Canada as the study area because, based on past experience, Quebec households show different characteristics when it comes to behaviour, values and sports preferences. I also used a simple approach to measure sports fanaticism, relying on three variables from the Print Measurement Bureau (PMB) PRIZMC2Link: 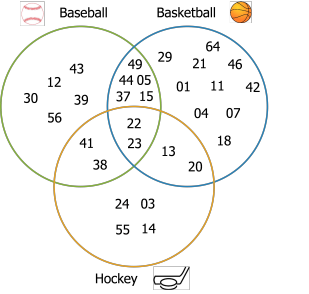 While PMB includes survey questions about attending professional sporting events, the general trend skews toward urban clusters whose members typically live closer to stadiums and arenas and therefore can more conveniently go to games. Sports Fan clusters were selected if they watched any professional sport at more than 10% above the English Canadian average.

Of course, some clusters watch more than one sport – like Cluster 22 Blue-Collar Comfort, an upper-middle class, middle-aged, exurban cluster made up of larger families. In order to find the sweet spot of fans for each sport, however, I removed those clusters that cheer for multiple sports. That left the following
clusters of serious fans for each sport:

By looking at the PRIZM icons assigned to each sport’s target segments, you quickly see similar clusters grouped together. The clusters of baseball fans, for instance, tend to be exurban families and town matures; basketball fans are found in segments filled with urban singles and families, as well as suburban families; and hockey fans are mostly suburban families and mature couples.

To gain a better understanding of these fan segments, I used a dataset called DemoStats (formerly known asDemographics Estimates and Projections) to identify their demographic makeup. The following insights come from weighted demographic profiles, based on the neighbourhoods classified as our fan clusters, so keep in mind that not each and every fan of a particular sport will fall within the same criteria. 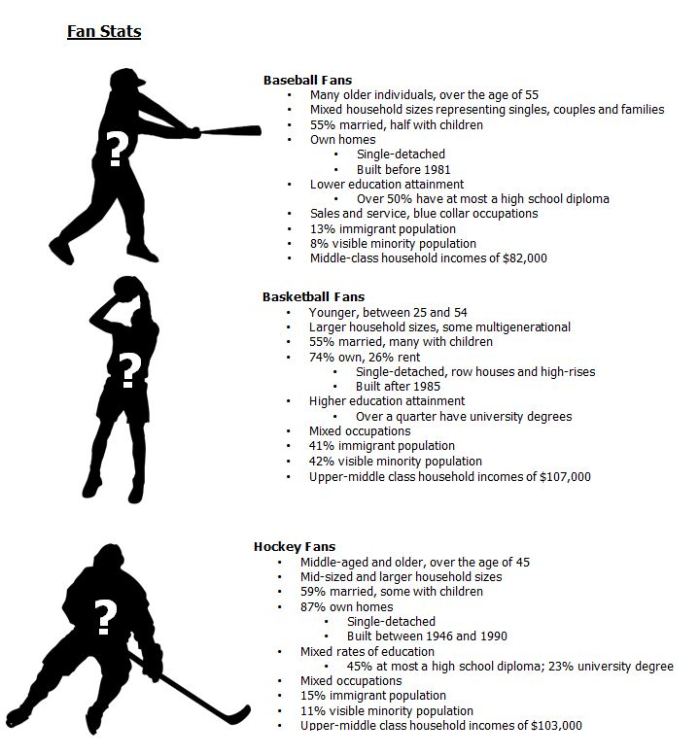 In addition to painting a demographic picture of the different types of sports fans, I wanted to get at the root of their motivations and attitudes. Am I really so different attitudinally from other baseball fans? At Environics Analytics, we use a product jointly produced with Environics Research called Social Values PRIZMC2Link, a survey-based database that reveals core beliefs and behaviours, which are later grouped into trends. These trends can help marketers develop the best creative to capture a target market’s attention.

We have already seen that the demographic characteristics of our sports fans are quite varied, and it is no different when we identify some of each group’s top Social Values: 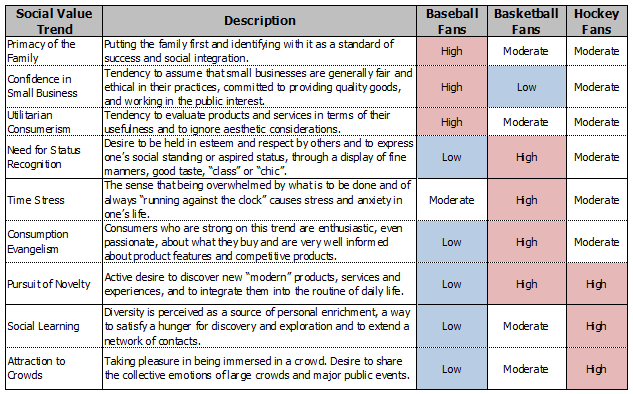 As we can see, where one fan segment ranks high for a particular Social Value, another may be low.Baseball fans tend to be proud and protective of their families, preferring smaller Canadian businesses and making their purchase decisions based on utility. Basketball fans, by contrast, lead more stressed-out lives, likely have lots of responsibilities to fulfill and want to be respected by their peers. Hockey fans like to enrich their lives by learning about other cultures and taking part in large events.

Finally, I wanted to find the cities and towns (with at least 10,000 households) that had the largest proportions of our Sports Fans target segments: 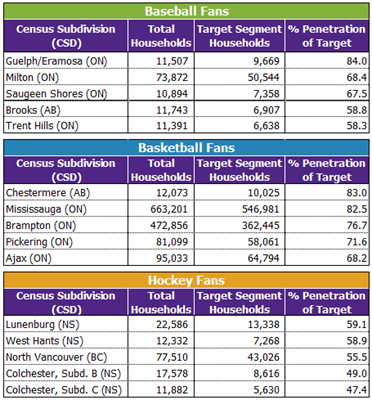 While there are many stereotypical ideas of sports fans, taking this data-based approach to understanding them can really opens some eyes—especially among sports marketers. Baseball fans are typically older in age, live in exurban and town communities, and prefer a quieter lifestyle. They show a preference for small business and, while Home Hardware may not be considered a small business to some, it makes sense that the company has been a longstanding advertiser of the Toronto Blue Jays. Something important to note, however, is that the baseball fans segment scores very low for the Attraction to Crowds value, which may explain why some exurbanites are reluctant to attend a baseball game in a big city.

Basketball fans, who tend to live in urban communities that consist of high proportions of recent immigrants, may be a marketer’s dream. These singles, couples, and families love to tell their friends about favourite products, and they’re always looking for new experiences. Although they appear to be always on the move, they will go online or use their phone to check basketball scores when they are unable to sit down and watch a full game.

Hockey fans still represent the traditional Canadian lifestyle, as some perceive it. Not only do they live outside urban centres, they typically score near the average on most Social Values. In general, these suburban families have embraced diversity in their neighbourhoods and use it as a way to enrich their own lives. Unlike baseball fans, however, they are not the type to shy away from crowds, which makes them a great audience for hockey games. NHL marketers: take notice.

One personal take-away from this brief analysis is that I can certainly identify with some of the characteristics of the baseball fans’ target group, despite the fact that I live in a cluster that roots for hockey and basketball. While my demographic is atypical of the baseball fans segment, I share some of the values of my fellow bleacher bums. Next to baseball, for instance, family and friends come first to me.

So the next time your crazy sports fan friend invites you to a game, just say yes. Sure, you might end up bolting for a seat in a different section, far away from their bullhorn and body paint. But at least you’ll meet some other likeminded people who share your passion for a certain knuckleball-throwing pitcher—or at least your fondness for small DIY businesses.

A Client Advocate in the finance, insurance, travel and telecommunications practice, Uschi Erne helps transform EA research and analysis into successful marketing programs for customers. Besides possessing a master’s degree in spatial analysis from Ryerson University, she is a collector of baseball memorabilia and last year sold a rookie baseball card of Washington Nationals’ centre fielder Bryce Harper for $500.