There is a general perception that Canadians are generous, community-oriented people. With the power of our various data products to profile consumer behaviour and values, we decided to take a closer look at how charitable Canadians really are.

There are many sources of data showing how much money Canadians give to charities and fundraisers, and they don’t all agree on our level of generosity. In 2012, 5.6 million people claimed on their tax return that they’d made a donation–nearly 20% of the country—for total charitable donations of $8.3 billion. But when we look at Statistics Canada’s 2010 giving survey, it reports that 23.8 million people aged 15+ donated to a charitable or nonprofit organization—or 84% of Canadians. The average individual donation was $446 per year, which translates to a total amount of $10.6 billion donated every year. Alternatively, a Print Measurement Bureau (PMB) survey indicates that 43% of Canadians donated at least $1 to a charitable organization in the last year—a percentage between the Statscan and tax filer figures.

Despite the variations in numbers, it is safe to say that a large number of Canadians give a significant amount of money to charities each year. This is a positive sign for fundraisers in general, but specifically for some more than others. According to PMB Fall 2013 Canadians are most likely to donate to hospital foundations over other foundations, with 19% of people donating to these charities in the last year. Religious organizations are the second largest recipients, PMB, Fall 2013reports, attracting donations from 14% of Canadians. All other types of charities are significantly less popular among contributors, reporting donations from only 2% to 4% of Canadians. This group includes alumni foundations and cultural, political, educational and environmental charities. 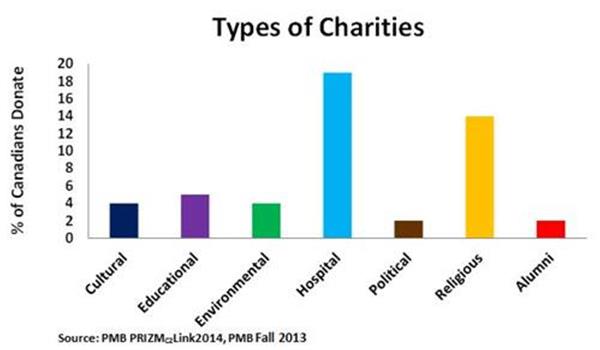 Because most charities receive donations from only a small percentage of people, they need to be more efficient at connecting with the right people in the most effective way. Much of this strategy boils down to understanding exactly who your donors are and then finding where similar prospects live.

To better understand Canadian donors, we turned to Environics Analytics’ PRIZM segmentation system. PRIZM classifies all Canadians into one of 66 lifestyle types reflecting their unique demographic characteristics, lifestyles, purchasing behaviours and social values. Every six-digit postal code in Canada has been assigned a PRIZM cluster, which makes it easy for charities to understand donation patterns across segments and to locate other prospective donors in those segments. Looking at those who donated at least $1 in the past year to Canadian charities, we’ve illustrate two segments of interest (there are of course others):

Cluster 12 - God’s Country is 44% more likely than the average Canadian to have donated to a charitable cause. These are middle-aged families with above average incomes and teenage children at home. Their average household income after taxes and personal necessities is $58,745—43% above the Canadian average. They feel financially secure and like to be recognized for their social standing among their peers, but they do not necessarily feel the need to be socially responsible. To reach this group, marketers might want to recognize them as valued donors, and show how much they appreciate their contributions.

Cluster 24 - Members of Nearly Empty Nests are 40% more likely than the average Canadian to donate to a charity. They tend to be married couples over 55 years old who either have older children living at home or are already empty nesters. They have a discretionary income of $46,589—14% above the Canadian average. These folks like to be in control of their lives and have a strong duty and obligation towards others who are less fortunate. To reach these people effectively, organizations might make the case that prospects have a responsibility to donate to their cause.

It is important to realize that, even with a large number of charitable donors in Canada, each contributor is unique. Segmentation can be a powerful tool to help understand the unique traits of your donors—especially when speaking in terms of major giving, annual giving, charitable events and other engagement events. Whether you are looking to use wealth data to identify key donors, or trying to determine the best message and channel to communicate with them, this data-based method can give you the information you need to be more effective in your future fundraising initiatives.