Comparing Population Growth in Canada and the United States

With many companies marketing their products in both Canada and the United States, questions often arise about how the two countries—and their consumers—compare. The U.S. Census Bureau recently released initial results from its 2010 decennial census, and one of the more striking findings is the increasing cultural diversity of the U.S. from 2000 to 2010. Our Canadian census is just occurring, and the results won’t be available for some time. But we can compare the U.S. growth rate with Canada’s growth over the same period based on available estimates. (In a future blog, I will compare the two countries’ cultural diversity.)

The 2010 U.S. Census reported a total population of 308.7 million, a 9.7% increase over 2000. This was the lowest growth rate since 1900, except for the 1930s when the growth rate was 7.3%. In comparison, Environics Analytics’ estimated Canada’s population was 34.1 million in 2010, an increase of 11.3% since 2000. Although the growth rates in both countries were similar, the demographic drivers of growth were very different. In the U.S., just under two thirds (62%) of the growth was due to a natural increase—that is, more people were born than died—and the remaining growth resulted from international migration. In Canada, international migration was the main driver of growth accounting for approximately two thirds of the total growth.

Regional growth patterns also differed between the two countries. In the U.S., regional growth was fastest in the South (14.3%) and West (13.8%) and much slower in the Midwest (3.9%) and Northeast (3.2%). Nevada was the fastest growing state (up 35.1% since 2000), followed by Arizona (24.5%), Utah (23.8%), Idaho (21.1%), and Texas (20.6%). Michigan, still mired in the recession, was the only state that experienced a population decline over the decade (-0.6%). Meanwhile, in Canada, population growth was highest in Alberta (25.0%), Ontario (13.1%), and British Columbia (12.2%). Newfoundland and Labrador was the only province to experience a population decline (-3.0%). Considering all 50 states and the 10 provinces, Alberta had the second highest growth rate following Nevada. The following chart compares population growth for the provinces with the growth in nearby states. Both Ontario and Alberta showed much higher growth rates than nearby states while British Columbia and Washington had similar rates of growth.

Both Canada and the U.S. are highly urbanized. In 2010, 83.7% of the population of the U.S. population lived in 366 Metropolitan Statistical Areas (MSA) compared with 81.7 % of Canada’s population living in 33 Census Metropolitan Areas (CMA). In the U.S., in 2010, there were 51 MSAs with a population of one million or more and nine with a population of five million or more. The fastest growing MSAs were Las Vegas, Nevada (41.8%), Raleigh, North Carolina (41.8%), and Austin, Texas (37.3%). The following table shows the ten largest and ten fastest growing MSAs. (Note that in these tables, we are using major city names for the MSAs; the official names are much longer and cumbersome).

Canada boasts six CMAs with a population of at least one million. The largest, Toronto (5.7 million), is the seventh largest CMA/MSA in North America. Canada’s fastest growing large CMAs are Calgary (32.5%), Edmonton (23.7%), and Toronto (20.3%). Calgary was the fourth fastest growing CMA/MSA in North America. Table 3 compares the growth of Canadian CMAs with larger (500,000 or more) MSAs in nearby U.S. states. Only two of the American MSAs had a growth rate of 15% or more while eight of the 33 CMAs had a growth rate of more than 15%. 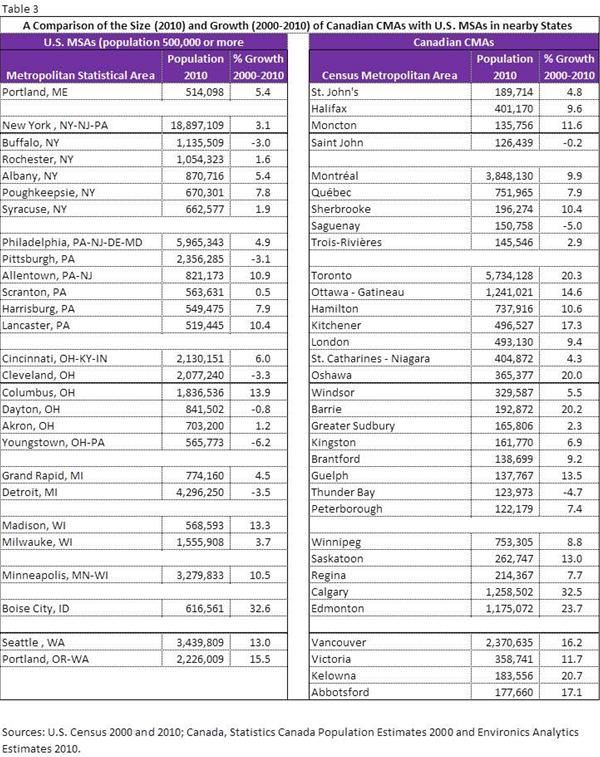 While Canada and the U.S. are both experiencing solid growth, the nature of that growth—its regional focus, its drivers and its urban concentration - can result in some very different lifestyle patterns and values profiles between the two populations. In the U.S., the movement of people to Sunbelt states in the South and West will have important consequences in the political arena. And for Canada, whose cities are growing mainly through international migration, a more diverse population brings with it many challenges and opportunities. As consumers, the two populations no doubt share many similar qualities, but the countries’ divergent growth patterns will likely create distinct spikes for specific goods and services in the future.

For further information on population growth in the United States based on the 2010 Census, see http://www.census.gov/prod/cen2010/briefs/c2010br-01.pdf