Canadians Speak in Many Tongues

The data covered three main topics: 1) mother tongue or first language learned, 2) languages used at home, both most often and regularly, and 3) ability to speak English or French well enough to conduct a conversation. For the first time, the questions on home language and knowledge of official languages were asked of the entire population. For 2006, the question on mother tongue was asked on the “short form” and asked of everyone, but the other language questions were asked on the “long form” census that went to 20% of households.  In addition to moving these questions, there were slight formatting changes in the questions.

Statistics Canada has indicated they are preparing a technical report on the changes in reporting language data in 2011.

The changes in reporting patterns can be observed by looking at overall mother tongue responses for 2011 and comparing them with the 2006 responses. In 2011, 495,000 persons reported multiple mother tongues of a non-official language combined with English and/or French. This was an increase of 68% from 2006. In comparison, the increase between 2001 and 2006 was 10%. This latest high increase is no doubt due mainly to the change in response patterns between the two censuses. However, the increase in non-official mother tongues (single and multiple combined) between 2006 and 2011 is lower than expected given recent immigration patterns.  .

Despite the changes in reporting patterns, the latest data still provide a good indication of the linguistic profile of Canadians today.

Canada has always been a country of immigrants who come to our shores speaking their mother tongue and, in most cases, having some knowledge of English or French. For the 2011 Census, more than 200 languages were reported as a mother tongue or home language.  As the origins of immigrants changed over the past several decades, so did the profile of languages that Canadians speak. Between the 2006 and 2011 censuses, approximately 1.3 million immigrants arrived in Canada and, based on earlier Census data, some 75% to 80% of them had a mother tongue other than English or French.

Among Census Metropolitan Areas, not surprisingly, Toronto and Vancouver stand out as the cities having the highest percentage of persons with a non-official language mother tongue, at 44.9% and 42.8%, respectively. These were followed by Abbotsford-Mission (29.1%) and Calgary (27.3%).  Six other CMAs had above-average concentrations (21% to 25%) of persons with a non-official mother tongue: Montreal, Kitchener-Cambridge-Waterloo, Winnipeg, Windsor, Edmonton and Hamilton. 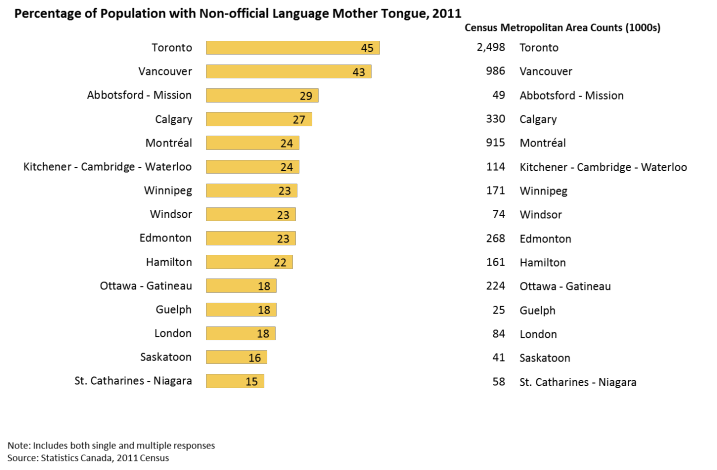 Between 2006 and 2011, the fastest growing home language was Tagalog (64.1%), followed by Mandarin (50.4%), Arabic (46.8%), Hindi (43.7%), and Creole (42.2%). These high growth rates reflect in large part the immigration from countries where these languages are spoken. Note that there were actual declines in Greek, Polish and Italian—the languages of older immigrants. The changes for the Chinese languages are more complicated to interpret as many Chinese immigrants indicate the language they speak is simply “Chinese”, recorded in the Census as Chinese, not otherwise stated. In 2011, there was a drop in the number of people who reported speaking a Chinese language not otherwise stated; at the same time, part of the increase in the number of those speaking Mandarin and Cantonese may be due to changes in reporting.  That said, there is little doubt the increase in Mandarin users has been much larger than those speaking Cantonese since, in recent years, immigration from Mainland China has been much higher than immigration from Hong Kong. 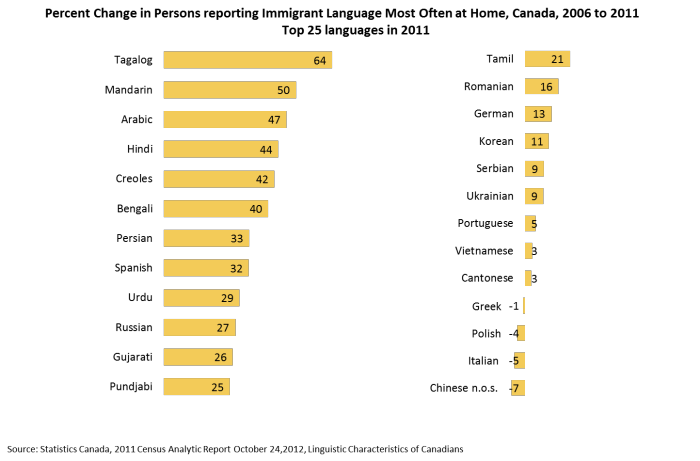 To simplify looking at the data by language, Statistics Canada in some cases allocates the multiple responses on language to one of three groups: English, French or Other. Using this approach, in 2011, 22.0 million persons in Canada (66.3%) reported speaking English at home on a regular basis; 7.0 million (21%) reported speaking French at home; and the remaining 4.2 million (12.6%) were speaking a non-official language most often at home. Numbers of language speakers were up for all groups but there was a slight drop in the percentages speaking English and French and a corresponding increase in the percentage speaking other languages.

In Quebec, 81.2% of the population reported speaking French most often at home, 10.7% reported English and 8.1% reported another language.  In looking at the linguistic profile of Quebec, the languages spoken by those whose mother tongue is neither English nor French is always of interest.  In 2011, 40% of these people spoke French, 30% spoke English and 30% spoke another language, either most often or on a regular basis.  A small number (5.4%) spoke both English and French at home.

Knowledge of English and French

In Quebec, the English-French bilingualism rate increased from 40.6% in 2006 to 42.6% in 2011. In other provinces, bilingualism declined slightly. In Quebec, the rate was 68% among Anglophones, 38% among Francophones and 50% for those whose mother tongue was neither English nor French.

Outside Quebec, only 7% of the total Anglophone population reported being bilingual. Not surprisingly, the great majority of Francophones outside of Quebec were bilingual.  For those with a non-official language mother tongue, 5% reported being able to speak both English and French and therefore were at least trilingual.

And the extent to which Canadians continue to use their non-official mother tongue languages may be an early indicator of changing notions of assimilation, national pride, regionalism, global perspective—even patriarchy, religiosity and community. These Social Values play important roles in how individuals behave in the marketplace and what messages motivate them to act.

As a result of these latest Census findings, businesses should be careful to consider Canada’s changing linguistic profile when marketing to Canadians.

One of Canada’s leading experts on the Census, Doug Norris, Ph.D., is a Senior Vice President and Chief Demographer at Environics Analytics. He joined EA in 2006 after nearly 30 years with Statistics Canada, in the role as Director General of Social and Demographic Statistics. Currently, he assists companies, government agencies and not-for-profit organizations in using census and other statistical information for planning and marketing projects.