Making Sense of the Census - Part 2: The New Age and Sex Data

In 2011, 14.8% of the population was aged 65 or older—nearly double the level of 7.6% just fifty years ago. In 2011, half the population was over the age of 40, compared to 1986 when half was older than 32. The reason for the ageing of Canada’s population is no mystery. It’s due to a combination of factors, including relatively low fertility rates the nation has experienced since the mid-1960s, an increasing life expectancy for all Canadians and the movement of the large Baby Boom cohorts into their senior years, defined here as 65 years and older.

This aging population trend likely will continue. The proportion of the population over 65 is expected to increase at a faster pace over the next two decades, reaching 20-25% of our total population by 2031. Although it’s aging, Canada is still considerably younger than most G8 nations. For example, in Japan, Germany and Italy, more than 20% of the population is over age 65. Only the United States and Russia have slightly younger populations.

Although virtually all parts of the country have been getting older, there were many regional differences. The Atlantic provinces and Quebec are older than the rest of the country, while Alberta and the Northwest Territories are the youngest. In fact, in 2011 all census metropolitan areas west of Ontario—with the exception of Kelowna and Victoria—had a below-average proportion of seniors.

Canada’s aging population has meant that the proportion of children 0-14 years old has been declining while the proportion of those 65 and over has been increasing. Fifty years ago in 1961, there were 4.5 children for every senior in Canada. Today, while children still outnumber seniors, that ratio is almost even, with 1.1 children to 1 senior. And over the next decade, the number of seniors will surpass the number of children. In 2011, seniors have already surpassed children for the first time in four provinces: Newfoundland and Labrador, Nova Scotia, New Brunswick and British Columbia.

Compared to the last census in 2006, Canada’s total population grew by 5.9% to 33,476,688. However, the age group 65 and over grew by 14% compared to 5.7% for the working age population (age 15-64) and only 0.5% growth for the 0-14 population. Interestingly, for the first time in fifty years, between 2006 and 2011 the preschool population aged 0-4 increased in all provinces and territories with an overall increase of 11.0%. The cause was two-fold: a small increase in fertility rates and more women in their childbearing years as the children of Boomers form their own families. 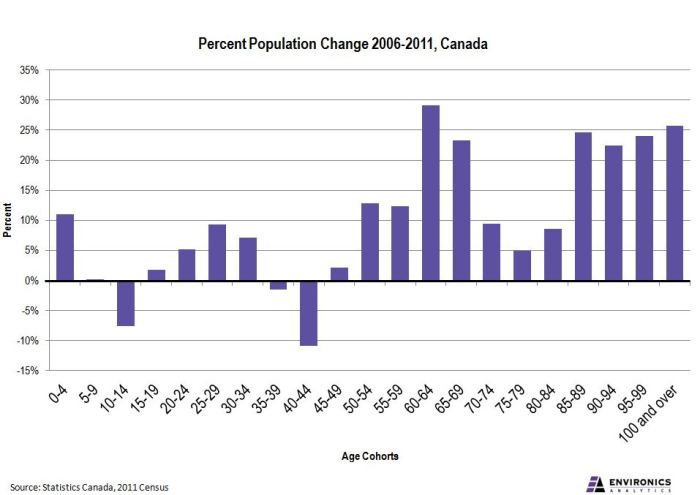 The latest census information indicates age distributions vary widely across the country. The proportion of seniors is highest in the Atlantic provinces and Quebec (16-17%) and lowest in Alberta (11%) and the territories (6%). The census metropolitan areas with the oldest populations, where people 65 and over account for nearly 20% of the population, were Peterborough (Ont.), Trois-Rivières (Que.), Kelowna (B.C.) and St. Catharines-Niagara (Ont.). At the other extreme, the youngest area is Calgary, with seniors representing less than 10% of its population.

The new data release also revealed the emergence of rapidly growing areas close to Canada’s large cities that have become popular retirement communities. For example, the senior population in Canmore, near Calgary, Collingwood, north of Toronto, and Joliette, north of Montreal, all grew at close to 25% over the last five years.

Although the major headline coming out of the new data is the growth in the senior population, some age groups actually declined in size since 2006. In particular, the 10-14 and 35-44 age groups showed substantial declines of approximately 7%. These decreases were mainly a reflection of the smaller Baby Bust generation of the late 60s and early 70s and their children. Analysts have long expected these reduced population numbers as this cohort follows in the shadow of the Baby Boom generation.

The aging of our population has significant implications. The shifting size of various age groups can affect government programs and the provision of services. The changes are also important for businesses to consider when opening stores, building housing developments and offering products and services. Stores that once catered to young families may now see an older clientele with different needs and interests requiring a different inventory mix.

Canada’s aging population also provides both challenges and opportunities in the marketplace as many goods and services consumed by seniors will be in greater demand. However, in addition to their increasing numbers, tomorrow’s seniors will have grown up differently compared to today’s seniors, and marketers will need to do their homework to understand their shifting demographics and psychographics. If they want to make sure they can connect with the senior consumers of tomorrow, companies may need to build an app for that.