Jun 29, 2012, 11:39 AM by Jack DePoe
Sitting in the food court adjacent to the Environics Analytics office on a Thursday afternoon, I am struck by the number of people gathered around the large flat screen TVs on display in the eateries. With Italy playing Germany in the semi-final game of the Euro 2012 football tournament, it appears that productivity is taking a bit of a dive in this corner of Toronto. 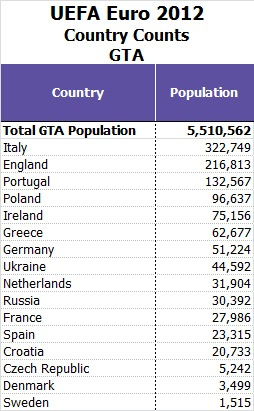 Of course, this scene is likely being played out in offices, bars and households all across the Toronto area as the 2012 edition of the competition winds down. In Canada’s most diverse city, with immigrants hailing from dozens of countries and over 200 languages spoken, the arrival of international sporting events of this magnitude prompt the emergence of sharply defined fan enclaves. Almost everyone picks a side—sometimes more than one.

Anyone who has lived in Toronto for even a brief period notices that the European diaspora in the city forms a large part of the character and tapestry that is Hogtown. Many residents still remember the summer of 1982, when Italy’s third World Cup win lead to one of the biggest street parties in Toronto history, with some 200,000 in attendance—and kicked off a Toronto tradition of flag-waving, horn-honking victory celebrations for big soccer tournaments. The practice of draping one’s vehicle in the flag of the “old country” is widely popular and, for the duration of the intense, short tournament, nationalism is on full display.

Toronto’s Italian, Portuguese and Greek communities are well-established, but there are local enclaves representing almost all of the sixteen participants in the tournament. Analyzing the ethnicity data from Environics Analytics’ Adjusted Census, we get a more complete picture of the city landscape where we can find the different nationalities represented in Euro 2012.

Poles and Croatians live in the western parts of the city and many Poles still frequent the Polish Catholic churches along Roncesvalles, where a Sunday afternoon may find them chatting and filling area cafes, restaurants and bars. During Euro, these expats and their children and grandchildren celebrate their heritage, sport their home country’s colours and fly their flags high in a celebration of sport. The Spanish and French populations in the city tend to be more diffused, with no neighbourhood clearly defined as their own, but often these supporters can be found mingling and exchanging friendly jibes with their Southern European counterparts from Italy or Portugal. Even the iconic Little Italy area, situated around College Street west of Bathurst, is as much Portuguese as it is Italian these days, and fans of both nations can be seen sitting side by side, cheering on each other’s teams or arguing over who would win should the two football giants face one another.

The Russians are a less-noted presence, but in the North Yonge Street area of Toronto, there is a larger-than-average number and, more than at past tournaments, Russian flags can be seen adorning cars driving througout the GTA. Similar circumstances surround the Ukraine, Czechs and Irish, with smaller populations and less of a visible presence, although there are still enough to see their flags. The Oranje of the Netherlands, especially, draw support from both expats and the unaffiliated, who continually hope that, as in 1988, they might see their heroes raise the cup in victory. With some neighbourhoods with above average numbers of Dutch residents to be found in the south of Milton and also east of the city, support for the Netherlands is well-represented in the GTA.

East to the Danforth is Greektown, an area of the city now festooned in blue and white in celebration of yet another tournament appearance by their team. With things looking bleak for Greece on the economic and political fronts, basking in a solid performance by the Greek soccer team helps lessen the sting of tough times. Unlike the Italian community, which has moved and grown beyond the traditional neighbourhoods around College Street and St. Clair Avenue West, the Hellenic community in Toronto has remained largely centred around the Danforth, where Greektown is still very Greek.

A supporter of Germany looking for fellowship may have to travel a little farther afield in order to find company. There is still a large German community in and around the Kitchener-Waterloo area, where the annual Oktoberfest is wildly popular, especially with the university students. In the Toronto area, there is a smaller German presence to the north, around Uxbridge, but there is not a defined “German area” in GTA.

With the many countries supported by fans around the GTA, one nation that often gets overlooked in the mix is England, which has a strong contingent of support, especially outside the downtown core. Many GTA residents state their country of origin as England and, for the most part, the Cross of St. George can be seen flying on the window of many vehicles, while the three lions crest adorns thousands of shirts in pubs and sports cafes across the city.

As the tournament builds to a final crescendo on Canada Day, it will be ironic to see many Canadians waving Italian or Spanish flags on the day that celebrates our nation. But at the same time, isn’t this scenario what Canada is really about? We built our country on the strength of immigrants and, while Old World rivalries still exist, seeing supporters of these fierce soccer rivals sit side by side in a downtown Toronto bar, trading friendly jabs, then shaking hands and congratulating one another at the end of the day, is a quintessentially Canadian experience. I can’t think of a better way to spend Canada Day than watching Italy play Spain to decide who will be Champion of Europe. With an ice cold Canadian beer by my side, of course! 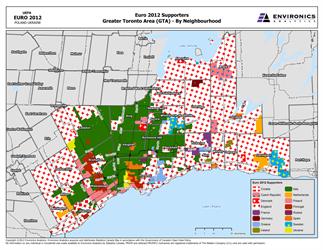 Jack DePoe is Director of Interactive Marketing and responsible for administering and enhancing Environics Analytics’ presence in the digital world.