How GTA Residents Beat The Heat

“Hot enough for ya?”

It has become the ubiquitous question in Toronto this summer, especially as temperatures reach the low 30s, Celsius, while the Humidex® ratings push their way above 40o C.  Of course, the question is usually delivered with the Canadian’s slightly sardonic humour; we are a people accustomed to temperature extremes over the course of a year.   Part complaint and part philosophical acceptance of the inevitable yearly temperature swing, the query epitomizes an attitude of making the best of things. The inverse question usually finds its way into the vernacular in late January, when a deep freeze can drop temperatures well below zero, compounded by the wind chill factor.

But these hot summer days are the reward for those who survive the snow, slush, freezing rain and icy roads of GTA winters and, when area residents emerge from their long hibernation pale and squinting, they go in search of sun, fun and, when the thermometre hits the high thirties, ways to cool off again.  While there are many tactics to beat the heat, new data from Environics Analytics’ (EA) PRIZM C2 segmentation system, which classifies neighbourhoods into one of 66 lifestyle types, offers a clearer understanding of how GTA residents bring their internal thermostats down during a heat wave.  And with this summer shaping up as one of the warmest and driest on record—according to recent reports like this one—it’s a great time to check out the research on ways we cool off.

With help from EA’s PRIZM C2 link to databases like NADBank, BBMRTS and PMB, we looked at the GTA to see which residents were most likely to escape to a cottage or a campground, and which ones hit a local swimming pool or a nearby ice cream parlour.  Air conditioner use across the city spikes sharply in summer months, but residents across the GTA don’t turn down their thermostats at equal rates.

Looking across the metro area, we see that, unsurprisingly, downtown Toronto has the highest proportion of residents who use window air conditioners. In the older buildings and homes of the old City of Toronto, central air was not a consideration during construction, so nowadays residents turn to window units to do the job.  The same holds true to a lesser extent in the York area. In the outer suburbs, the picture is nearly reversed.  Homes in East Gwillimbury, King Township and Pickering are more than 60% more likely than average to have central air conditioning, while households in Halton Hills, Malton and Whitchurch-Stouffvile are 50% above the norm.  Once again, this pattern can be attributed to many of the houses and subdivisions in these areas being built in more recent times, when central air conditioning was a common feature.

The ‘burbs come out on top again when it comes to fondness for ice cream parlours.  In the eastern region of the GTA, Ajax residents, with their larger families and younger children, score high for trips to ice cream shops; Georgina is tops, at 20% above the norm.  Meanwhile, in the more traditional downtown, residents got to ice cream parlours at more average rates, with only the old borough of York scoring slightly above the norm. The concentration of families in areas like Pickering and Orangeville also results in high rates for visiting ice cream parlours there.

In general, suburbanites like to go swimming to beat the heat, with households in Caledon, Uxbridge and King Township all scoring above average for that activity. And you can bet that, when the summer heat arrives, residents will be hitting the pools in greater numbers.  While swimming is the most popular of our selected summer activities in Richmond Hill and Markham, these areas tend to be close to the average in their behaviour. Etobicoke and North York also score above average for swimming, but they’re the only communities in Toronto market to do so. East York, York, downtown Toronto and Scarborough all score at or below-average rates.

Other GTA residents don’t tend to stick around town—at pools or anywhere else, for that matter—preferring to flee for a cottage or campground. Many escape the smoggy environs of Hogtown and head to the areas of the province commonly referred to as “cottage country”—the Parry Sound-Muskoka-Haliburton region, Kawartha Lakes or Bancroft and Northern Hastings County.  If you live in the town of Mono, you’re nearly twice as likely as the average GTA resident to own a cottage, while King Township, Milton and Etobicoke residents also score significantly above the norm.   Cottage ownership is a decidedly suburban phenomenon, with even the old inner suburbs of East York and North York scoring high on the cottaging charts.  Conversely, if you live in Markham, you’ll likely be cranking up that central air rather than escaping to a cottage to cope with the heat.

The area whose residents are least likely to own a cottage—and, as it turns out, are more likely to enjoy camping—are those in the old downtown core of Toronto.  And if you call Newmarket, Georgina, Uxbridge or Orangeville home, you are more likely than the rest of the GTA to be a camper.  When the summer heat soars, you’ll also find the sweltering residents of Brampton and Ajax packing their cars with tents, gas stoves and kids for the trek to Algonquin Park, Killarney or one of the hundreds of lesser-known campgrounds that dot Ontario.

As the August civic holiday approaches, weather forecasts indicate that the dog days of summer will be upon us once again. So grab a cone, a camper, a cottage or an air conditioner—whatever it takes to chill out in your neighbourhood. And while you revel in a cooling breeze and a spot of shade, just remember: winter will be here before you know it. 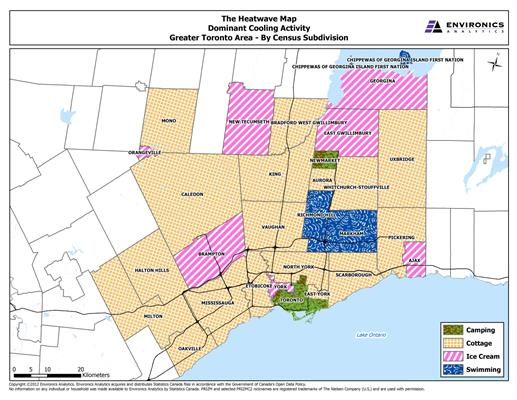