Canadian Families Come in All Kinds of Configurations

Forget about the Beaver Cleaver family. New data from the 2011 Census indicate increasing diversity among family and household types. And as the many different domestic configurations ripple through communities, businesses and government agencies will need to adapt to a new “normal”. In the third release of 2011 census data from Statistics Canada, only about one in four households (26.5%) consist of the traditional single family couple with children under age 25 living at home—down from over 30% just a decade earlier.  In fact, the data show that single person households (27.6%) and couples without children under 25 (29.5%) are more common than that idealized home filled with mom, dad and kids, celebrated in 1950s and 60s TV shows. In addition, lone-parent family households make up 10.3% of all households.

The latest snapshot of contemporary Canadian society also showed diversity in other ways. Although the majority of all couples in 2011 were legally married, one in five were in a common- law arrangement.  Furthermore, between 2001 and 2011, the number of common-law couples increased by 35.4% while legally married couples increased by only 6.7%. The census data also counted some 65,000 same-sex couples –about one third of whom were married. Same-sex couples represented 0.8% of all couples in Canada, a share consistent with percentages reported in other countries.

Today’s “blended” families are also evident in the details of the census release. About one in eight couples with children were classified “stepfamilies” which is defined as including at least one child from an earlier relationship.  And even within the category of stepfamilies, the data revealed various combinations of “his, hers and our children.”

The changes in family configurations revealed in the 2011 Census give marketers plenty to think about when they seek to better understand their customers. In particular, key demographic target groups have experienced significant shifts, as detailed in the sections below. 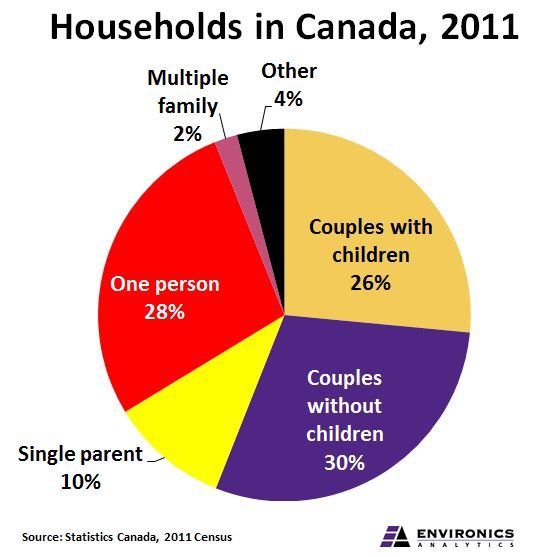 Marketers can no longer generalize about the childhood experience. In 2011, some 5.6 million children under the age of 14 lived in private households. But close to 19,000 children lived in “collective dwellings”, such as group homes or shelters. The great majority of children in private households (99.2%) lived with one or two parents. However, the remaining 50,000 children lived with other relatives or non-relatives.  Close to 30,000 of these were foster children.

Meanwhile, about a tenth of all children under 15—about 558,000 children—lived in stepfamilies in 2011. Close to two thirds were stepchildren themselves while the remainder were children of both parents living with stepsiblings.

And in another sign of the times, nearly 5% of all children under 15 (269,000) lived with at least one grandparent in 2011. Most lived in a multigenerational household that included at least one parent; however, 30,000 lived in so-called skip-generation families with only with one or two grandparents—and no parents— in the household. Obviously, the domestic construct known as family continues to evolve.

The 2011 Census showed another shift in family life when it looked at young adults. In 2011, there were 4.3 million young adults aged 20-29 living in private households. Just over three in ten young adults were living in a couples relationship, but a solid majority (55%) of these were classified common-law relationships. At the same time, a significant percentage of young adults (42.3%) were still living at home with parents, while 9.2% were living alone and 14.7% lived with others.

As expected, there were major differences in living arrangements for those in their early 20s compared to late 20s. For those 20-24, 64.5% of males and 54.8% of females lived at home with parents. For those in their late 20s, 29.0% of males and 19.2% of females were still at home with parents. With so many young adults putting off serious relationships, their Boomer parents have had to delay the prospect of entering their empty-nesting years. 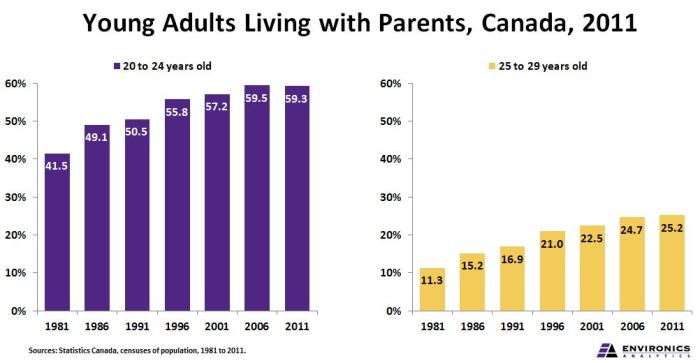 In 2011, the census data reported 5 million seniors aged 65 and over, accounting for 14.8% of the total population.  Over 90% of seniors lived in private households in various family types:  The majority (56.4%) lived as part of a couple in 2011, up from 54.1% in 2001. Just about a quarter of seniors lived alone, 10% lived with relatives and 2% lived with non-relatives. The remaining 7.9% lived in collective dwellings, such as residences for seniors or heath or chronic care facilities. However, since women outlive men by about four years, living arrangements for men and women were quite different.

The 2011 Census is the first time Statistics Canada has identified “seniors’ residences” separately from nursing home or other chronic care facilities. Accordingly, the agency warns that the classification of collectives for seniors is complex and the data should be used with caution. In 2011, the Census reported 128,000 seniors aged 65 and over living in a seniors’ residence compared to 224,000 living in a nursing home or chronic care facility. Of those living in seniors’ residences, 15.0 % (27.3% of men and 10.3% of women) were living as a couple. As longevity among men and women continues to increase, this trend is expected to grow. 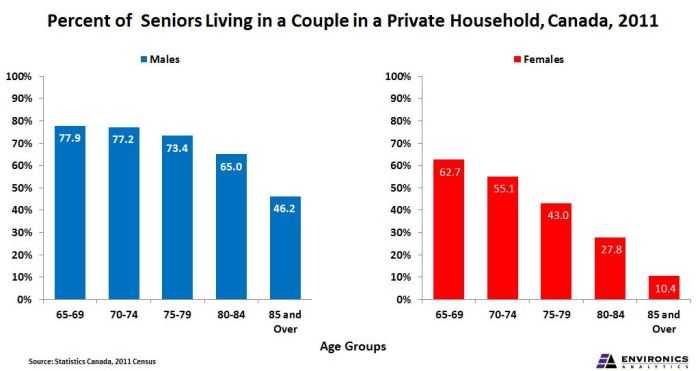 The changing configurations of Canadian households as revealed in this latest census data have important ramifications for businesses, public sector agencies and not-for-profit organizations. Already, the real estate sector is starting to respond to the changing demographics as many cities experience a condo boom to absorb the increasing number of seniors. And I predict that aging Baby Boomers will downsize even more than their predecessors, eager perhaps to relive the days when hanging a Jimi Hendrix poster was all it took to make an in-town apartment more like home. The changing family is providing all of us as well as governments and other organizations with new challenges in caring for our children, parents, grandparents. Given all these new living arrangements, the ability to segment populations by lifestyle and social values will be even more important as governments and marketers seek to connect with their clients to offer products and service relevant to the way we live now.

If nothing else, the recent census release points to the increasing diversity of Canadian families and households. An earlier release showing the changing age structure of the population and projections underscored the expectation that most future population growth will occur among the older age segment.  In addition, Canada is also undergoing significant change in its cultural diversity as the number of immigrants increases. We will get a glimpse of just how that cultural diversity is evolving when the next release of census data on language is made available later in October and when the more detailed National Household Survey results are released next May.