Geek Of The Week: Mark Kaminski

Mark Kaminski was a computer geek long before computer geeks were cool. As a teenager in the pre-PC days of the late 1960s, he became interested in computers after watching the original Star Trek television series. “I was fascinated by the sight of people talking to computers,” he recalls. “From tenth grade on, my goal was to work with computers.”

From a fondness for pointy-eared Vulcans with tricorders, lifelong careers are born. Mark began taking college-level programming courses while still in high school, feeding punchcards into early IBM machines like the System 3, 1130 and 360—the wooly mammoths from which today’s PCs descended. “The IBM 360 filled a fairly good-sized room, though now its computing power could be accomplished by your average smartphone,” he says, “A disk drive was the size of a washing machine and a tape drive was the size of a side-by-side refrigerator.”

“Being a Chief Technology Officer means refusing to accept that you can’t fix a problem.”

Now the Chief Technology Officer at Environics Analytics, Mark oversees a battery of ten servers that house upwards of 110 terabytes of data—220 million times more data than the first hard drives he worked on. He helped develop the infrastructure for the company’s popular ENVISION micromarketing platform, making sure the servers were properly equipped to handle client projects and traffic for several years. Ever the futurist, he says that much of his work involves developing “a private cloud” and sophisticated contingency plans to ensure clients always have the tools and data they need when they need them.

“Being a Chief Technology Officer means refusing to accept that you can’t fix a problem,” he says. “I’ve worked all my life in different aspects of the information industry—from programming to technology migration—from one form of computer technology to another. So I describe myself as determined, not stubborn.”

Despite his singular career focus, Mark’s upbringing was a bit more scattered. Born in Sault Ste. Marie, Mark and his family moved frequently because of his father’s job as a field superintendent for an international construction company. By the time he was 18, he’d attended schools in seven cities on both sides of the Canadian-U.S. border—Montreal, Kirkland Lake, Sudbury, Grand Falls, Newfoundland, Toronto, London and Escanaba, Mich., which he says had the greatest influence on his upbringing. “It’s one of the largest cities in northern Michigan,” he notes. “The people from Michigan’s Lower Peninsula were called ‘trolls’, because they live below the bridge that connects Lower Michigan to Upper Michigan. Those of us in the north called ourselves ‘Yoopers’ or ‘UPers’—for the Upper Peninsula.” 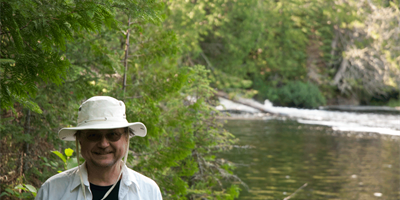 Mark concedes he wasn’t much of a student except when it came to science, especially computer science. “I was one of the kids bored by most of the curriculum,” he recounts. “But computing was not typical and therefore not boring.” An accidental assignment to a typing class would help bolster his keyboarding skills, but he discovered there were other benefits as well, as he recalls: “I found myself surrounded by UPer babes, so I stayed.”

Mark earned a college diploma in programming from Cambrian College, in Sudbury, and then an honours bachelor’s degree in computer science from York University. But he never stopped learning programming languages and he’s now fluent in twenty different “dialects,” including five different assembly languages (Singer, Neat, PDP-11, Microsoft and IBM 360), and higher-level languages, like C, Java and dialects of COBOL, DEC Basic, RPG and PL1. His first job out of school was an assembly programmer for NCR. “In those days, you aspired to be a COBOL programmer,” he says. But the fast-changing computer world had other plans for him.

Over the next 30 years, Mark moved up the ladder to senior positions in management, software development and consulting at some of North America’s largest computer manufacturers and computer consulting firms. He worked for DEC, the Molson Company, General Foods and Cambrian College. In 1993 Mark joined Compusearch, and for the next eight years served first as Senior Vice President of Information Technology and then Chief Technology Officer. He also oversaw the development and implementation of MarketLink™, a proprietary data mart that focused on applying geodemography and clusters to large customer transaction data warehouses, frequently referred to today as “Big Data.” 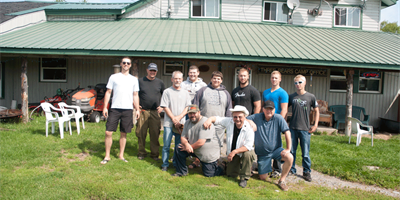 “I’ve been fortunate in my career to have worked with some of the best IT people in Toronto,” Mark observes. “Many shaped my outlook on business computing, which can easily be summed up with the words, ‘You can’t go around a problem, you have to go through it.’” He goes on to explain that, when people confront a problem, they often try to go around it from a different direction. “But I think that when you hit a problem and have identified a solution, that’s probably still the best solution,” he says. “You just need good problem-solving skills, a rigorous approach and the dogged determination to solve it.”

It was also at Compusearch that Mark met Jan Kestle, who later became the founding president of Environics Analytics. In 2003, Mark joined the fledgling company as its fourth employee (after Jan, Catherine Pearson and Danny Heuman). “I was at the original pitch to investors at Environics,” he recalls. “All together, I’ve worked with Jan for nearly twenty years.”

Through all the changes in computers and employers, Mark has enjoyed constancy and strength with his wife of 37 years, Penny, a Medical Radiation Technologist. Their two children are grown and out of the house, each having earned bachelor degrees in computing along with other disciplines. Mark Junior, 35, is an assistant portfolio manager. Daughter Kelly, 33, teaches high school calculus and computers. Mark and Penny have lived at the same address in Markham for thirty years, though the neighbourhood has evolved as families of European extraction have given way to those from China. Today, the PRIZM segmentation system classifies it as Asian Affluence (wealthy, suburban Chinese families).

“I’m not like my cluster, but it does reflect my neighbourhood as it exists today,” says Mark. “My grandfather on my father’s side was Polish and came to Canada eighty years ago. My mother’s family was Pennsylvania Dutch and arrived in the mid-1700s, so I identify simply as ‘Canadian’.” And Mark spends a lot of leisure time doing very un-Asian Affluence activities, such as fishing, hunting and camping.

Mark especially enjoys heading out to Shining Tree, a rugged area twelve hours north of Toronto, where he used to hunt as a boy with his father—“my favourite times growing up,” he says, noting that he continued that tradition with his children. “Our kids were raised in tents along rivers and lakes in Shining Tree. They became used to getting dragged out in the middle of the night to look at the Milky Way and spectacular northern lights’ shows .” Today, he likes to hunt for grouse or deer, and fish mostly for pickerel. “You’ll see a lot of Americans hunting bear,” he says. “But most Canadians hunters aren’t into bear. We don’t have a Daniel Boone complex in this country.” 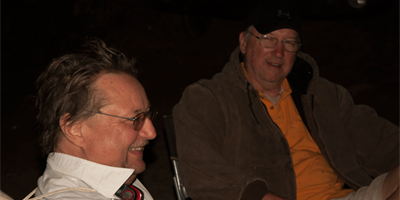 Nor is he interested in the competitive nature of some hunters. “I look at hunting as a social engagement with family and friends,” he continues. “It’s
Mark by the fire with friends.

not so much about dropping a ten-point buck as spending time with family and sharing in the harvest.” And now that he has acquired a 32-foot Fifth Wheel trailer that sits in the rear of the pickup, he’s able to explore the bush more deeply. “I’ll park on Crown Land and then walk for miles until there’s nothing around,” he says. “It is truly awesome to walk a foot trail, alone, through Ontario’s remote, arboreal bush—like you belong there. I have a deep and abiding respect for our First Nations peoples and their ability to walk as first-among-equals in our great northern expanse.”

If he had it his way, the technology envisioned in Star Trek would allow him to beam back and forth between the bush and EA’s server room. But Mark says there is a connection between the two worlds. “The computer environment is very creative,” he says. “And the outdoors allows me to appreciate creation.” It’s one reason why, when asked about the best training for an IT professional, Mark responds simply, “life experience.” As he explains: “Problem-solving is a learned skill. And the more you experience, the better you are at finding different ways to solve a problem.” It may sound far-fetched, but certainly no more far-fetched than voice-activated computers to a young Trekkie.