On the Road Again

Just can’t wait to get on the road again? Willie Nelson may croon about the liberating aspects of a roadtrip, but when it comes to the trip to work, that’s an entirely different tune. Most Canadians aren’t so eager to get back on the road this fall, especially for their daily slog to work. While the average Canadian commute clocks in at 25.4 minutes, for some the drive can involve an hour or more of tapping brakes in an endless rhumba of red taillights. But depending on where you live, there are other modes of transport that may take less time, such as a bus, subway, street car, light-rail transit or even a ferry ride. Some folks are fortunate to work near where they live, so the commute is a refreshing stroll or bike-ride away, while for those with a home office, it’s a quick two-step to their desk, slippers optional.

Commuting by car is the road most taken, with nearly three-quarters (74 percent) of Canadians pulling out of their parking space to merge into morning traffic. Public transit users account for 12 percent of Canadians, and those who turn to basic human power—walking or biking—account for nearly 6 percent and 2 percent, respectively. Sprawling urban Prairie cities like Calgary and Winnipeg have the highest proportion of people who drive a car to work. Toronto and Montreal, with their extensive public transit systems and large populations to support them, have the most public transit commuters. And contrary to the myth that cyclists avoid the snow and cold, bicycle commuters are common in Ottawa-Gatineau, Winnipeg and Montréal. 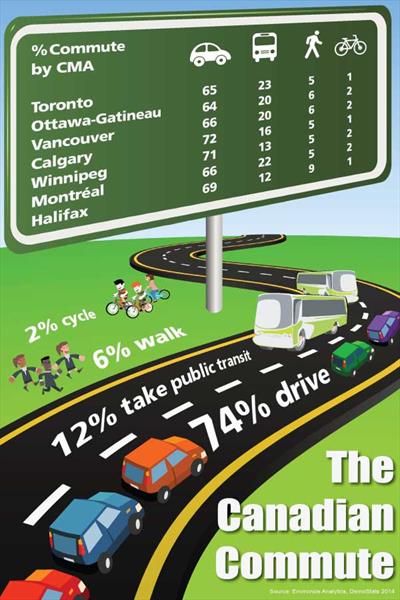 For the most part, people commute according to their lifestage and where they live. According to Environics Analytics’ PRIZMC2 segmentation system, the bipedal commuters are typically young, single urbanites who rent apartments near their places of work. A high concentration of these walkers resides in PRIZM segments like Grads & Pads (young, lower-middle-class urban singles), Rooms with a View (young, ethnic singles in urban high-rises) and Electric Avenues (young, upper-middle-class urban singles and couples). Similarly, cyclist commuters tend to be young singles and couples who live in urban segments like Electric Avenues and Jeunes et Actifs (young and urban Quebec singles and couples). More mature, well-to-do urban families, like Money & Brains (upscale, educated couples and families) also don mud-guards and helmets to get a daily dose of exercise. But the weather can tax even the hardiest of riders, not to mention the nerves of steel required when sharing the road with menacing two-ton trucks and the horrors of helmet-hair.

Public transit appeals to singles and families who live in metropolitan areas close to buses subways and trains. Notable in this group is the high proportion of diverse ethnicities, including many recent immigrants, who are busy establishing careers and families. Members of lifestyles like Newcomers Rising (young, downscale city immigrants), Urban Spice and Rooms with a View (young, ethnic singles in urban high-rises), they forgo the car-commute hassles and expenses but they’re at the mercy of schedules and delays. On the upside, riders can browse the daily commuter tabloid, challenge their score on Candy Crush or just sit back and catch a few winks—all while someone else navigates the traffic.

Car commuters tend to be busy families who live in suburban and town PRIZM segments like Tools & Trucks (upper-middle-class town families and couples), Fast-Track Families (upper-middle-class exurban families) and Villes Tranquilles (middle-aged francophone families and couples). They make the commute-for-lifestyle tradeoff by traveling up to a few hours a day for the pleasure of owning a home in the suburbs. In addition to time, there are other costs in the car commute: insurance, fuel, parking and the ambiguity of traffic flows that can try the patience of even the most placid drivers. But driving to work offers benefits that may balance the expenses: independence and flexibility. Busy car-driving parents can fetch the kids from swim practice, drop off that stack of overdue library books and pick up dinner at the deli. The car is not only the modern-day pack mule, but also a place where people can indulge in some personal time to sip a coffee, sing aloud or think about nothing in particular.

Regardless of how you get to work, commuting can represent a sacrifice of time but also time for oneself. It serves as a buffer between the comforts and responsibilities of home and the actions, interactions and challenges of work. Maybe Willie did have something there. I can’t wait to get on the road again….