Oct 15, 2014, 09:02 AM by Nicole Wright
Gone are the days when an evolutionary line separated human beings from pets. The domestication of animals, and our increasingly close relationship with them, has turned former hunting dogs and alley cats into members of the household. Once the domain of people, the household today is shared with dogs, cats, fish and birds – not to mention the odd gecko and other exotic critters. For the most part, the most common household pets are furry, four-legged animals, with one quarter of Canadian households having one or more dogs or cats (27 percent and 25 percent, respectively, according to a PMB Fall 2013 study). And having a pet is becoming more than simply an ownership relationship, as people increasingly project their values on them. In fact, pets are now more likely to be treated as companions, housemates and even family members. Who hasn’t received a holiday card with a seasonal salutation and signature from “Rick and Cindy, the kids and Fido the Fox Terrier?” How can you avoid running into a smartly dressed Cocker Spaniel in the park, the poor pooch donning a tartan sweater and booties? 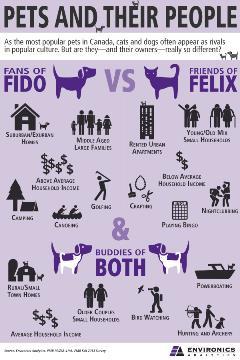 As they burrow their way into our homes and social worlds, pets are increasingly coddled by their loving—and free-spending—owners. Canadian households last year spent an average $538 on pet expenditures, with veterinarian care and other related services accounting for $216. And when it comes to dinner time, table scraps or the backyard mouse just don’t cut it anymore; average household spending on pet food is $246, according to Environics Analytics’ HouseholdSpend 2014. Grocery and big-box store pet food aisles are brimming with dietary choices for puppies, overweight cats and large-size dogs, not to mention the plethora of treats, toys and grooming supplies. Although dogs are nearly 4 percent more likely than cats to eat premium-type packaged food, cats are nearly 4 percent more likely than dogs to receive costly wet food. But thanks to their tail-wagging and fetching skills, dogs are more likely to receive treats than cats: 20 percent to 13 percent, respectively (PMB PRIZMC2Link 2014).

Owning a pet appeals to a wide range of Canadians, but there are differences between the lifestyles and demographics of cat and dog owners. According to EA’s PRIZMC2 segmentation system, dog owners tend to be families living in the suburbs where Fido can roam freely within a backyard. Dog owners are concentrated in PRIZM segments like Rods & Wheels (older, upper-middle-class couples and families), Fast-Track Families (large, upscale suburban families) and Tools & Trucks (upper-middle-class town families and couples), where a dog serves as a companion for the kids and a security system for the house. In addition, members of aging clusters, like Simple Pleasures (mature, lower-middle-class suburban homeowners), are likely to have a dog because these retirees simply have more time for daily walks and exercise with their dog. And empty-nesters also score high for dogs, viewing their pets as great replacements for their grown-up children—albeit likely more obedient and reliable.

On the other hand, cats can live inside a home and live a long time—sometimes twenty years or more—while they transcend the changes in their owner’s lifetime. Accordingly, cat owners are often found among young urbanites, suburban families and seniors. For the members of PRIZM lifestyles like Mobility Blues (young, mobile downscale city dwellers) and Startups & Seniors (midscale mix of young and mature singles and couples), a cat may serve as a low maintenance and affordable roommate quite comfortable in apartment-style living. Residents of Back Country Folks (older, lower-middle-class couples and families in remote areas) and Simple Pleasures (mature, lower-middle-class suburban homeowners) may still have an aging cat from their years of childrearing or have recently adopted a cat for its companionship and low-maintenance appeal. Mature couples can take a weekend away knowing the cat is content with a big bowl of kibble, a litter-box and a window to track birds.

Regardless of the setting, pets fill a gap in our social worlds. At a time when adults face long work hours and large distances between family members, we long for simpler ways to connect—and Felix the feline doesn’t require logging into a computer or picking up a phone. Pets engage us in a relationship that’s unconditional: we feed them and give them a home, and they simply love us.