The Makeup Of Canadians' Makeup 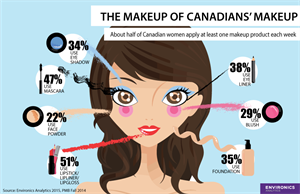 Whether they’re perfecting the smudge-free cat-eye look or showing off that new shade of red lip gloss, about half of Canadian women apply at least one makeup product each week. While fashion magazines insist the current cosmetics craze is all about contouring and bold brows, here’s a data-based look at what makeup products Canadians are actually using. (click the image to enlarge)

Although social media platforms across North America are trending with #NoMakeupSelfies posted by celebrities and everyday women alike, makeup is still a prominent component of women’s beauty regimens. Whether just trying to look presentable to the rest of the world on Monday morning or creating a compelling visage of long lashes, bright eyeshadows and bold lipsticks on Saturday night, Canadians of all ages are passionate about their makeup. And according to Environics Analytics’ (EA) Fall 2014 PMB study, 21 per cent of Canadian women like using cosmetics to change their appearance.

It may have begun years ago when, as tweens, they’d sneak into their mother’s makeup bags to play dress-up. Fast-forward to today and, for many women, cosmetics qualifies as a full-fledged obsession. According to PMB, every week 22 per cent of Canadian women use face powder, 29 per cent use blush, 34 per cent use eye shadow, 35 per cent use foundation and 38 per cent use eye liner. Almost half use mascara and lipstick: 47 per cent use mascara, and 51 per cent use lipsticks, lip liners or lip glosses.

And while many think that Millennials are the biggest users of cosmetics—witness the proliferation of YouTube beauty vloggers and the preoccupation with the contouring talents of Kim Kardashian—our data show otherwise. The numbers indicate avid makeup users’ ages actually range widely. According to EA’s PRIZM5 segmentation system, the two segments that score highest for using cosmetics on a weekly basis are Silver Linings (urban seniors in high-rise apartments) and Grads & Pads (young, single urban renters). One or both of these segments rank among the top three for using six of seven beauty products.

But the high usage of makeup among seniors can also be traced to where they live. According to PRIZM5, the segments that score highest for cosmetic consumption contain city-dwellers and, to a lesser degree, suburban residents. Among the other segments filled with fans of makeup: Sunset Towers (low-income seniors in urban apartments), Young & Connected (younger, low-income diverse urban renters), Newcomers Rising (younger, downscale city immigrants), Diverse City (diverse, middle-income city dwellers) and Urbane Villagers (wealthy, middle-aged and older city sophisticates). Along with members of Silver Linings, all are avid lipstick users and all live in cities.

These city-dwellers, needn’t worry about being “all dressed up with nowhere to go.”  EA data show that the top makeup-using PRIZM5 segments also score high for dining at restaurants, going to pro basketball games and frequenting the movies—typical of their neighbourhood’s myriad of going-out options. In addition, women who enjoy using lipstick are also huge consumers of fashion magazines, with more than half reading the likes of Elle, Flare and Lou Lou.

While these Canadians may devote a significant part of their income to entertainment, they’re also spending a chunk of change while they’re out and about. Over the past month, 52 per cent of Canadian women have bought a cosmetic product, with The Bay and Shoppers Drug Mart their main suppliers. And one of Canada’s less affluent segments, Young & Connected, contains heavy users of eye liner and ranks relatively high on monthly cosmetic purchases. Despite being recent immigrants to Canada with shoestring budgets, they enjoy keeping up-to-date with all forms of popular culture—including the latest fashion trends. Not surprisingly, EA’s data show that a high percentage of women who have bought makeup during the past month also prefer to buy brand-name clothing. It’s a preference that could in part be attributed to their desire for upward mobility: with the right makeup and clothes, you can achieve anything no matter where you came from.

From BB creams and false eyelashes to mineral powders and liquid eye liners, cosmetics have become a regular part of Canadians’ fashion statement, helping women disguise bags and blemishes, enhance their natural features or just make them feel good about themselves. And with new trends emerging every season—have you heard of the new “blurring” technique to hide blemishes?—makeup will continue to make up a coveted collection on many women’s vanities for many years to come.