As with all “named” generations, there is no hard-and-fast definition of the Millennials, also referred to as Generation Y or the Echo Boom. Many demographers define Millennials as those born during the 1980s and 1990s; in 2015, that would make them aged 15 to 34, with the older ones born to Baby Boomer parents. 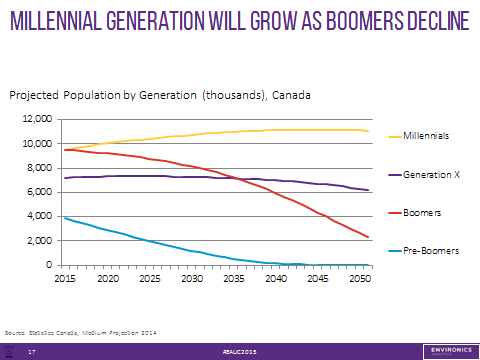 Of course, Millennials are not a monolithic group, especially since their age span crosses the “living on their own” divide—an important milestone when it comes to lifestyle. Among many younger Millennials, many are still attending school and most still live with their parents.Currently, Millennial household maintainers account for 2.8 million, or 19 percent, of all households—about half the number of Boomer households. However, within a decade most Millennials will have formed households of their own, many with young children. Demographers project that, by 2025, the number of Millennial households will increase to 5.5 million, more than the projected 5.2 million Boomer households.  At that point, Millennials will be aged 25 to 44 while Boomers will be aged 60 to 79. Therefore, not only will there be more Millennial households, but their consumer expenditures will be considerably higher compared to other population cohorts as they build their careers and families. Meanwhile, most Boomers will be spending less as they live out their retirement years.

How are they different?

Millennials not just a large generation; they are also different in many ways from earlier generations. They have remained in school longer and, as a result, have delayed starting their careers and building their families. When they finally leave school, Millennials will be the most educated generation yet, in large part due to Millennial women who have considerably higher levels of education than their male counterparts.

As a result of this educational gender imbalance, young Millennial women account for a majority of Millennial workers in many professions such as dentists, family and specialist physicians, lawyers and notaries, and veterinarians. In comparison, among the older generation aged 55 to 64, the representation of women in these professions is generally under 30 percent.

Finally, and arguably the most important characteristic from a marketing point of view, Millennials are the first native digital generation. That is, they were born into the digital world and engage in social media daily—much more frequently than even Gen Xers, their older brothers and sisters now aged 35 to 49. More than with any other generation, digital media will play a key role in marketing to Millennials.

What are their Social Values?

As with all generations, Millennials have a unique perspective that colours their Social Values. And marketers need to take these values into account when deciding how best to communicate with these consumers. Environics Analytics’ sister company Environics Research Group annually tracks the Social Values of Canadians, allowing us to paint a more nuanced picture of what Millennials want and value.

Millennials are the least religious of all generations and have liberal values when it comes to gender equality, family types and cultural diversity. They have less sense of traditional hierarchies and see other age groups as equals; they’re even likely to see their parents more as friends than traditional authority figures. In general, Millennials are sincere and spontaneous. They like to connect with people, and family is important for them.  They like to develop and express their personalities and, at the same time, feel intensity, intimacy and thrills. In terms of careers, they prefer work that is fulfilling but at the same time they want to “make it” and be seen as succeeding by others; personal accomplishment, image, and status matter to Millennials. However, quality of life is also important and they value their private time and friendships outside of work.  The Millennial generation clearly works to live rather than lives to work. But in the attempt to do it all, they feel more time stress than other generations.

In the marketplace, Millennials enjoy consumption and appreciate aesthetics; originality and novelty are important to them in products, packaging and brand attributes.  They have confidence in business, both big and small, along with a fair degree of confidence in advertising.  Brand is important to them, and they consider themselves consumption evangelists who are quick to spread the word, both positive and negative, about their purchase experiences—much of it through social media.

In addition, Millennials are more optimistic than other generations. Although their careers are off to a slow start, they are confident they can make up for lost time, and they have less financial concern about the future compared to other generations. Even at their young age, they recognize the importance of saving though they haven’t done much to create a financial cushion just yet. Marketers expect that to change in the coming years.

The diversity of Millennials

The data paint a broad picture of the Millennial generation as a whole. However, as with generations, all Millennials are not the same, and there’s much diversity within Millennials.  To fill in more of that portrait, a future blog posting will look at the diversity of Millennials through the lens of PRIZM5.