Beyond “Moneyball”: Analytics Reveals Who Cheers For Which Sports

Looking back at the wildly successful NBA playoff run by Toronto, we saw Raptor fever take over the city to the point where 3,000 supporters would stand in “Jurassic Park”; the square outside the Air Canada Centre, on a windy 70 day just to cheer them on.  What is really interesting is the composition of the crowd:  young, diverse, loud and wildly enthusiastic.

On the other hand, the spectators at our more time-honoured sports—hockey and football—are far more restrained, leading me to take a closer look at the audience characteristics of these pro sports. Has there been a significant shift in both the makeup and preference of each sport’s audience? If so, how do their traditional and current audiences differ? Hockey may be our national sport, but is its popularity declining among younger fans?

Fortunately, all of the resources of Environics Analytics are available to assist in answering these questions. In addition to PRIZM5, EA’s lifestyle-based segmentation system, there is a large amount of information on the demographics, media consumption patterns and, of course, preferences among the major sports (hockey, football, basketball, baseball and soccer) that are regularly broadcast across Canada.

The first step is to look at the PRIZM5 segments which represent the highest concentration of fans for each of these sports.  PRIZM5 classifies all Canadians into one of 68 segments, based on lifestyles, Social Values and demographics. The results are both informative and thought-provoking. Rather than being sports fans (that is, fans of all sports), Canadians show distinct preferences for specific sports.

Here are the top 5 PRIZM5 segments for each sport’s fans:

As the segment icons illustrate, there’s a clear division in audiences for each of these major sports. Even the CFL and NFL appeal to a somewhat different crowd, according to data on some of the key attributes of these groups of fans. What stands out here is that the traditional (for lack of a better word) sports such as football and hockey skew to much older fans. While there is some overlap in fans for all sports, baseball, basketball and especially soccer clearly appeal to younger groups. And hockey is dominated by francophone segments. This is understandable given that the Montreal Canadiens are the only major league sports team in Quebec, and they have a storied history of success.

Age is one thing, but what about other key characteristics like urbanity, education, income, and ethnicity? 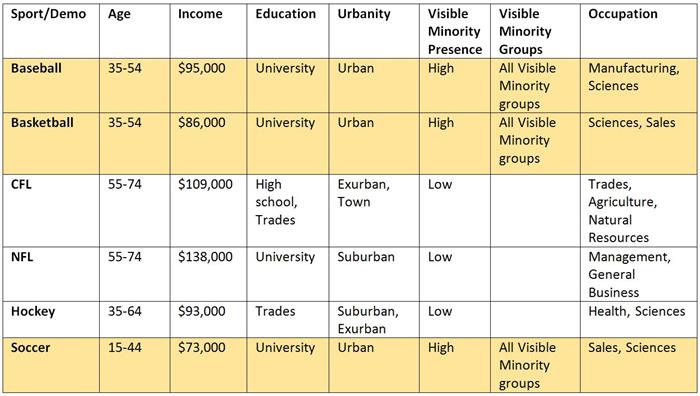 Again, there are stark differences among the audiences. Income, certainly a function of age and education, is highest among pro football’s NFL and CFL fans. Soccer fans have the lowest income, primarily because of their youth (many are still of school age). Urbanity is also a significant indicator: football and hockey are suburban and rural sports, while baseball, basketball and soccer skew urban.

Most interesting is the ethnic makeup of these audiences. The “traditional” sports’ audiences, besides being older, are much less diverse than the “newer” sports. The appeal of newer sports stretches across all the visible minority groups, regardless of origins.

The audience for each medium is divided into quintiles, described as Heavy, Medium Heavy, Medium, Medium Light and Light. Quintiles are derived by dividing the population (e.g. television viewers) into five equal groups according to their consumption of media (again, as an example, hours viewing television). The table below indicates the dominant quintile for each sports audience by medium.

Once again, the differences are apparent. While all sports audiences consume all media types, hockey and football audiences typically receive their news and entertainment through “traditional” mass media, including television and radio; they are also more inclined to use the various direct media.

Meanwhile, baseball, basketball and soccer fans get most of their information from the Internet. In contrast to fans of traditional sports, they are light consumers of mass media, although they do use apps and sites that provide similar information (radio streaming services such as TuneIn Radio, for example).

EA also has access to psychographic Social Values data from our sister company, Environics Research Group (ERG). Social Values help uncover what matters most to people, and how those values affect the decisions people make—helping marketers develop communications strategies that speak effectively to specific audiences. As might be expected, once again the data show a distinct dichotomy between older and newer audiences among sports fans.

The following table lists the three top Social Values for each of the sports’ audiences. Brief definitions of these values appear at the end of this blog post.

The point here is not so much the values that each audience possesses, but that there is such a large difference between the two groups, as well as similarities within them.  When reviewed subjectively, the values that the traditional and more modern-day sports audiences hold are entirely disparate.

Hockey and football fans, as well as being older, tend to hold more insular and traditional views than their new-sports counterparts, who have a larger world view. In fact, some of the values held by the groups are virtually opposite one another (“Multiculturalism” versus “Parochialism”, for example). It seems clear that these groups differ in their outlook, not just with regard to sports, but at their core beliefs.

In that sense, the audiences for these different sports is a sign of the changes that are taking place within our culture. It’s not just a question of young versus old, but of a wider view. Along with greater exposure to and acceptance of new cultural behaviours, the younger, more urbane and more diverse audiences of the new sports are declining to follow their parents, and choosing their own paths. Sports is just one example.

Heywood Hale Broun, the sportswriter and commentator, once said, “Sport doesn’t build character…Sport reveals character.” In the same way, when examining the audiences for various major sports, we can see the changes taking place even as our culture evolves.

Jim Green is Vice President of Sales, Quebec Region, for the retail and media industries.