Canada is Home to More Seniors Than Children

And as if those figures aren’t enough to make younger generations cringe, the census also reported that there were 771,000 people over the age of 85 in 2016, up nearly 20 percent from 2011. There were even 8,230 centenarians, up from 5,200 in 2011. Obviously, Canadians are living longer and are healthier in their advancing years.

Although Canada is aging, it is still younger than other G7 countries, with the exception of the United States.  While 16.9 percent of Canadians were aged 65 or over, that age group represented 14.5 percent of the U.S. population. However, other G7 countries were older, with those aged 65 or over ranging from 17.3 percent in the United Kingdom to 25.1 percent in Japan.

In 2016, females outnumbered males in Canada, making up 50.9 percent of the population. And while younger aged females were a slight minority, the percentage of women increased at older ages: women accounted for 55 percent of those over 65 and 65 percent of those 85 and over. An eye-popping 84 percent of centenarians were female.

Although Canada’s population grew by 5 percent between 2011 and 2016, growth varied by age group, as shown in the figure below. 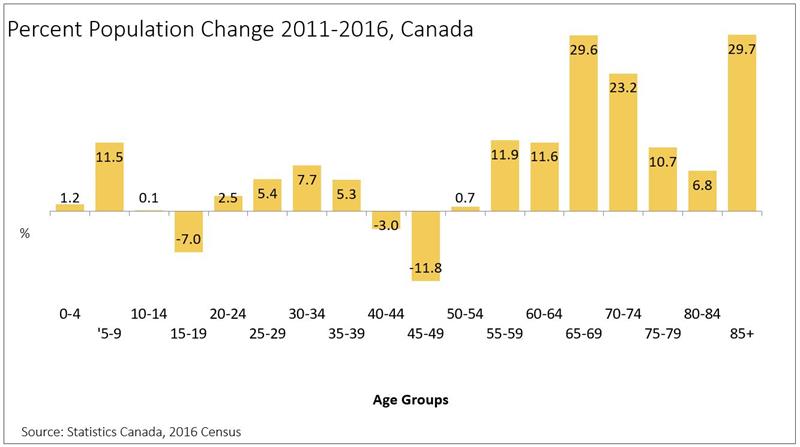 Three age groups, those 15 to 19, 40 to 44 and 45 to 49, actually declined in size over the period 2011-2016. On the other hand, the biggest growth occurred among those at older ages, as increasing numbers of Baby Boomers—those born between 1946 and 1965—reach their senior years and medical advances help swell the number of nonagenarians.

In general, there is a negative correlation between population growth and the age of a population. In other words, areas growing more slowly or declining are typically home to an older population compared to areas that are growing more rapidly. For example, in the six largest urban areas that were among Canada’s fastest growing, those 65 and older represented only 12.1 percent of the population. In contrast, in rural areas of Canada outside the North that recorded little growth, or actually declined, more than 20 percent of the population were 65 or over.

Regionally, the Atlantic Provinces were Canada’s oldest, with close to 20 percent of their population 65 or older. At the other extreme, the provinces with the lowest percentage of senior citizens included Alberta (12.3 percent aged 65+), Saskatchewan (15.5 percent) and Manitoba (15.6 percent). In addition, the three northern territories—Nunavut, Northwest Territories and Yukon—were also found to be very young: their populations aged 65 and older accounted for just 3.8 percent, 7.7 percent and 11.9 percent of the populace, respectively, in part due to their young Aboriginal population.

The fastest-growing Census Metropolitan Areas (CMAs) were also among the youngest. In Calgary, Edmonton, Saskatoon and Regina, less than 14 percent of their populations were over 65. The next fastest-growing CMAs were concentrated in the Greater Golden Horseshow—Barrie, Kitchener-Cambridge-Waterloo, Toronto and Oshawa—and in each one, those aged 65 and older accounted for 14 percent to 15 percent of the population. By contrast, the oldest CMAs were Trois-Rivières, Peterborough, St. Catherines-Niagara, Kelowna, and Victoria, all with over 21 percent aged 65 and older.

Among medium-sized urban areas, two stand out for their senior populations: Parksville (BC) with 44 percent who are 65 or older and Elliot Lake (ON) with 38 percent. Other areas with more than 30 percent of their populations 65 and older were Wasaga Beach (33.4 percent) and Cobourg (31.4 percent), areas attracting an increasing number of retirees.

Historically, in the largest metropolitan areas of Toronto, Montreal and Vancouver, the central cities were home to an older population than the suburbs. However, the 2016 Census shows that the gap between central city and suburbs has virtually closed and in fact has been reversed in Montreal and Vancouver, where the suburbs were home to a slightly higher percent of seniors compared to the central city. The age gap has closed due to more rapidly aging suburban neighbourhoods, many of which were established over 25 years ago. In Toronto, the suburban senior population increased by 31 percent, compared to 13 percent for the city; in Montreal, the difference was 23 percent versus 9 percent, and in Vancouver, 25 percent versus 19 percent.

The 2016 Census reported nearly 6 million seniors over 65. And nearly 93 percent of those seniors lived in private residences with most of the remainder living in group residences for senior citizens or other health care facilities.

Most of the data on dwellings will be reported in later census releases. However, this release includes the structural type of these dwellings. Just over half (54 percent) were single-family dwellings, 10 percent were apartments of five or more stories and the remaining 36 percent were row, semi-detached or other types of dwellings. Although single-detached dwellings make up the majority of structures, growth over the 2011-2016 period was highest for apartments of five or more floors (13 percent) compared to 3 percent growth for single-family dwellings and 8 percent growth for other types of dwellings. The high growth rate for apartments was mainly due to the increasing popularity of condos and seniors downsizing to apartments.

Canada’s population continues to grow older, and now there are more seniors than children under age 15. The older population will continue to show high growth as Baby Boomers move into their 60s and 70s. And though incomes and expenditures are lower at older ages, the large and rapidly growing number of seniors offers potential for businesses and industries offering products and services designed for seniors, including especially the health care, travel and financial services industries. There may be increased interest among seniors to remain living in their local communities rather than move to much more expensive health care facilities, and this trend likely would result in a greater need for home care services. With decreased mobility and many seniors living alone, municipalities will also face a need for better public transportation. And businesses offering home delivery of products targeted to seniors are likely to become even more popular.

A more detailed analysis of these Census results will be presented in a webinar scheduled for 2:00 p.m. EDT on Thursday, May 11. You may register here.