The third wave of data from the 2016 Census was released this morning in two parts. The first part covered families, households and marital status, while the second focused on languages spoken. If there is one uniting theme to the data, it is that Canadian life is diversifying, with non-traditional forms of families and households growing along with the variety of languages spoken.

The new census data revealed the increasing diversity of Canadian families. In 2016, there were just under 10 million census families; married couples made up about two-thirds of the total while 18 percent were common-law couples and 16 percent were lone-parent families; nearly 80 percent of those lone parents were women. The share of common-law couples was up slightly from 2011, continuing a long-term trend.

Living arrangements among Canadians have been evolving and diverging for decades, as various social and economic forces hold sway. The majority of children under the age of 15—approximately 70 percent—lived with both of their biological or adoptive parents, and without stepsiblings or half-siblings. Close to 2 in 10 children were part of a lone-parent family and an additional 10 percent were part of a stepfamily.

During the past 30 to 40 years, we had seen a trend among young adults to form families later in life—for both married and common law couples. This trend continued in 2016 with 47 percent of those age 20 to 24 living as a couple or lone parent down from 50 percent in 2011. Among those ages 25 to 29, 70 percent comprised their own census family, down slightly from 71 percent in 2011.  The small changes suggest the trend of delaying family formation may be coming to an end.

Along with marrying later, there has been a long-term upward trend among young adults, ages 20 to 29, to live with parents. There are several possible explanations for this trend, including economic forces causing low wages and poor employment prospects, and more children choosing to further their education in post-secondary and graduate schools. In 1981, 42 percent of those 20 to 24, and 11 percent of those 25 to 29, lived with parents. In 2016, these figures rose to 62 percent and 27 percent, respectively—up slightly from 2011.

Since women outlive men by an average of four to five years, and women generally marry men older than themselves, the living arrangements of older men and women vary significantly. For example, 58 percent of men aged 85 and over were living with a spouse compared to only 16 percent of women. Not surprisingly, women were more likely than men to be living in an institutional setting (35 percent of senior women versus 23 percent of senior men), or living alone (33 percent versus 17.5 percent).  The proportion of senior women living alone has actually declined from 38.3 percent in 2011 to 33 percent in 2016, likely as a result of recent life expectancy gains for men which translate into more couples living together longer. 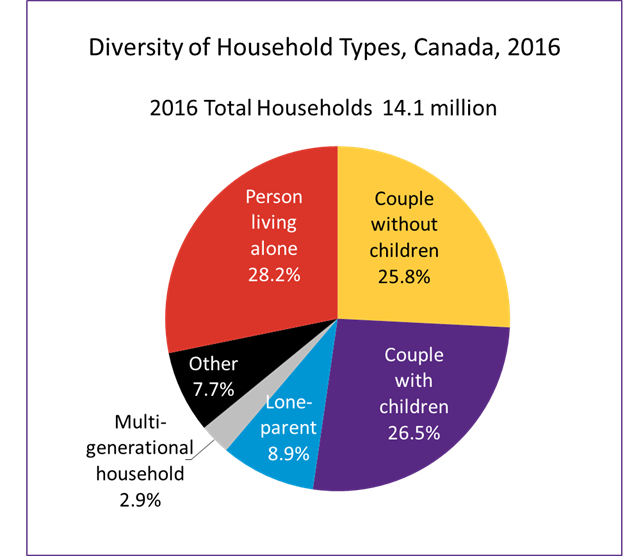 Just as family and household configurations have been diversifying, the 2016 Census also showed a continuing increase in Canada's linguistic diversity, reflecting the nation’s growing immigrant population. The census measures a range of linguistic concepts: mother tongue, language spoken most often at home, other languages spoken regularly at home and knowledge of the two official languages, English and French, as well as languages used at work. The latter will be reported as part of the labour data release in November.

Across Canada, just under 650,000 people (2 percent) reported not being able to speak either English or French. These tended to be older immigrants from China, India, Vietnam or Korea. The number of people not able to speak English or French was up 25 percent from 2006 compared to an overall population increase of 11 percent.

A total of 6.3 million Canadians (18 percent) reported being able to speak both English and French—the highest proportion ever reported. The previous high was 17.7 percent in 2001.   Among Francophones, 46 percent were bilingual, compared to 9 percent of Anglophones and 12 percent of those with a mother tongue other than English or French.

The changing patterns of Canadian households and languages as revealed in this latest census data have important ramifications for businesses, public sector agencies and not-for-profit organizations. With the trend to later family formation slowing, businesses can expect an increasing number of young Millennial adults to be in the market for new homes, home furnishings, and baby and child products.

Although the number of Canadian households continues to grow, there will be little increase in households with children, while the number of empty-nest households and one-person households continue to increase. This trend will likely mean a strong demand for apartment living—both condos and apartment rentals. Older, empty-nest couples and singles who choose to remain in their home will likely continue to fuel demand for home remodeling services. And as these men and women settle in to their newly renovated lifestyle, there may be many opportunities for gift shops that offer tableware, decorative items and other “nice-to-have” flourishes that were out of reach of their budgets when they were raising a young family.

Clearly, the nuclear family no longer dominates the Canadian household landscape, and marketers should be sensitive to the new dynamics at play. Once again, segmentation tools that capture this shift in household profiles will help companies understand the real-world lives of their customers, not the idealized view from decades ago.

Although more detailed information on immigration, ethnicity and the cultural diversity of Canada will not be released until October, the latest language data are harbingers of the increasing cultural diversity of Canada. The many languages spoken by Canadians and the large increases among some linguistic groups mean that marketers need to be aware of the need to use languages other than English or French in some communications. A segmentation of the population by degree of acculturation will also help marketers to better pinpoint areas where third language communication would be effective.

A more detailed analysis of these Census results will be presented in a webinar scheduled for 2:00 p.m. EDT on Thursday, August 10. You may register here.

One of Canada’s leading experts on the Census, Doug Norris, Ph.D., is a Senior Vice President and Chief Demographer at Environics Analytics.