The fourth wave of data from the 2021 Census was released by Statistics Canada this morning, covering the topic of language in Canada.

The Census measures a range of linguistic concepts including mother tongue, language most often spoken at home, other languages spoken regularly at home, knowledge of English and French and first official language spoken. There are additional data on languages used at work that will be reported as part of the labour data release in November 2022.

Mother tongue is defined as the language first learned and still understood.

A single mother tongue other than English or French was reported by 7.8 million people (21.4 percent), which represents a slight increase from 21.1 percent in 2016. A small but growing percent of the population (3.2 percent) reported multiple mother tongues, the majority being a combination of English and a language other than French.

Some mother tongues saw significant growth from 2016 to 2021. Among those reported by at least 100,000 people, Hindi (38 percent), Punjabi (33 percent), Gujarati (28 percent) and Spanish (28 percent) showed the largest increases, reflecting the high immigration from India in recent years. On the other hand, some European languages, in particular German, Italian and Polish reported large declines in mother tongue reporting. These trends reflect the aging of these immigrant groups. 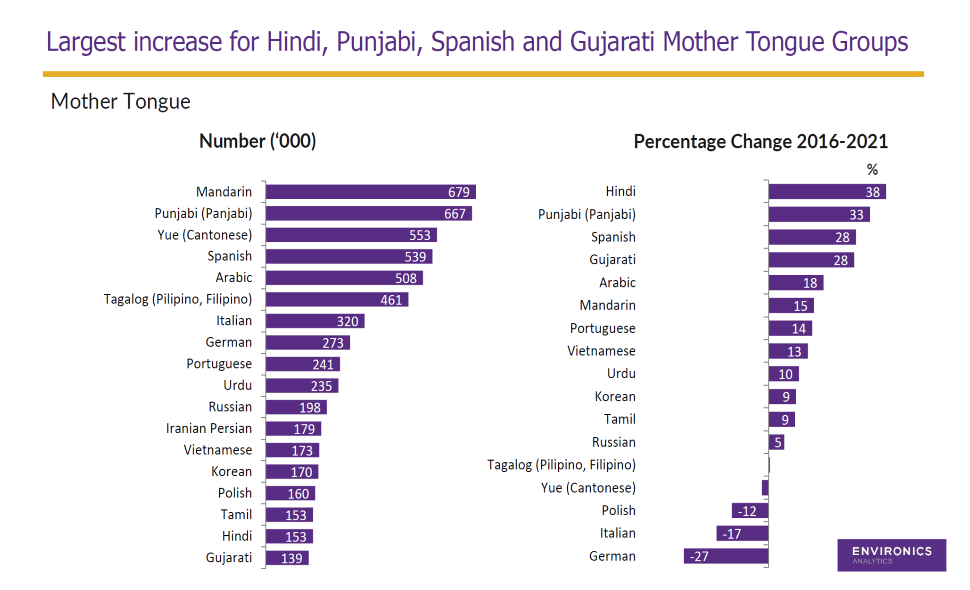 Pictured above: Number of people (in the '000s) who speak a mother tongue other than English or French and the percentage change from 2016-2021.

2.5 million people, 6.7 percent of the total population, do not speak English or French at home

Among the largest mother tongue groups where no English or French was spoken at home were Mandarin, Punjabi and Yue (Cantonese) speakers. 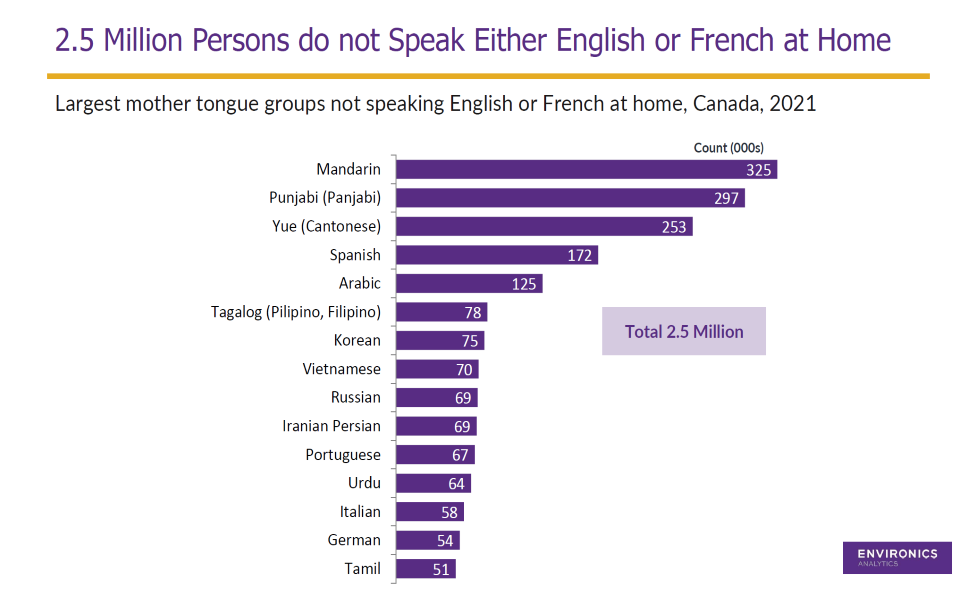 No change in the level of English-French bilingualism

A total of 6.6 million Canadians (18 percent) reported being able to speak both English and French, the same percentage as in 2016. Among Francophones (French mother tongue), 47.6 percent were bilingual, compared to 9.0 percent of Anglophones and 11.5 percent of those with a mother tongue other than English or French.

Of all the provinces and territories, bilingualism was highest in Quebec (46.4 percent) and New Brunswick (34 percent). The bilingual rate increased in Quebec, up from 44.5 percent in 2016, but decreased in the rest of Canada.

The many languages spoken by Canadians and the large increases among some linguistic groups mean that marketers need to be aware of the need to use languages other than English or French in some communications. In particular, there were 2.5 million Canadians who do not speak English or French at home and reaching them may require communication in their mother tongue. A segmentation of the population by degree of acculturation will also help marketers to better pinpoint areas where third language communication would be effective.