Coping Without The NHL

Typically, when the leaves begin to turn colour and the temperature begins to creep into single digits, a large portion of the Canadian populace in cities that are home to NHL teams, turn their attention to our national game: hockey.  The newspapers fill up with articles previewing the teams and power rankings while the media pundits weigh in with their analyses on who will win what, and why.  Just play the “Hockey Theme” in a crowded area and you will see an almost Pavlovian response from many Canadians as their ears perk up and they look around, expecting to find flashing blades and the stirring narration of one of the game’s famed TV commentators.

But this fall, the ongoing labour dispute between the NHL owners and the NHLPA has put a damper on this annual tradition.  Now heading into the second month without NHL hockey, fans in Calgary, Edmonton, Montreal, Ottawa, Toronto, Vancouver and Winnipeg have begun looking for ways to fill the void created by the cancellation of at least two months of the current season.

Examining residents in these CMAs (Census Metropolitan Areas)  through the lens of PRIZMC2, the segmentation system from Environics Analytics that sorts Canadians into 66 distinct lifestyle types with links to research from BBM, PMB and NADBank, we can get a better idea of what hockey fans might be doing with their extra free time.   While those most likely to attend NHL games tend to hail from the PRIZM lifestyle types that are higher up the income scale – clusters like Furs & Philanthropy (upscale, middle-aged and older families), Cosmopolitan Elite (very wealthy middle-aged and older families), Suburban Gentry (wealthy, middle-aged suburban families), Electric Avenues (young, upper-middle-class urban singles and couples) and Mini Van & Vin Rouge (younger, upper-middle-class Quebec families) – NHL watchers come from a much broader audience of lifestyles and urbanities.  Appreciating hockey is something that transcends social and economic barriers in Canada.

In Montreal, where les Canadiens hold an almost religious stature, residents will be filling their Saturday evenings with other pursuits while they pine for the bleu, blanc et rouge.   According to the PRIZMC2 research, local comedy clubs will likely have a few extra patrons in the audience, some of whom might be wearing caps bearing the famous C logo of their beloved team.  Those Montrealers who would otherwise spend an evening at the Centre Bell also might be inclined to hit a jazz concert or, for those looking for a bit more sporting action, take in a boxing match.  On the TV, where some sports stations have taken to filling the traditional NHL slots with classic games to give viewers their hockey fix, the research shows that Montreal residents also might flip to game shows, talk shows and auto racing to get their competitive fix on the tube.

Heading down the highway to the Ottawa-Gatineau area, where the Senators made their return last spring to the playoffs, the absence of hockey will be keenly felt as hopes for a revival of the successful Sens of the mid 2000s were rekindled.  Unlike their neighbours in Montreal, Ottawa residents show a higher penchant for attending live hockey and football games, though with the new CFL franchise not expected until at least 2014, their sporting void may have to be filled in the nation’s capital.  The Ottawa 67s in the OHL already have a sizable following, and they’ll likely see an increase in interest from hockey-starved residents this year.  Ottawans are, like their Montreal counterparts, more likely to hit a comedy club or turn on the TV to auto racing than the rest of Canada, but they’ll also tune into the NFL and watch nature shows, the research reports.  And an outing to a casino might give them the thrills they need to tide them over until NHL hockey returns.

The Leafs Nation, the other half of the infamous “Battle of Ontario”, will be hit hard by the absence of the Buds this fall.  Given the frustration of recent seasons—the Leafs have not made the playoffs since 2004—fans were looking hoping for a positive performance from their team.  But with the lockout having erased the preseason and first two months of the schedule, sports fans in Toronto are turning to other options.  The Raptors regular season has just tipped off and many expect to see a rise in attendance at those games, where Toronto residents already score well above the norm for attending NBA contests.  Across the parking lot from TFC, the Toronto Marlies also may see an increase in both attendance and interest from local hockey fans.  Those Torontonians who stay in to watch their team on the tube might be flipping over to movies, basketball or reality TV, according to the PRIZM-linked data.  Meanwhile, those who prefer a night out might use the money normally spent on hockey tickets for a night at a club or some culture at the ballet or opera.  Options abound in Hogtown, though little will quite fill the void of true Leafs fans. 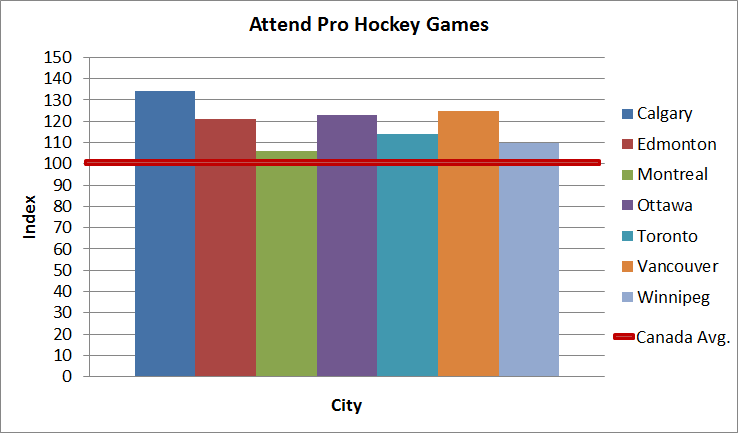 “Canadian hockey cities’ propensity to attend NHL or AHL games when compared to the national average of 17.5% (index of 100=average).
Sources: Environics Analytics 2012, based on PRIZMC2 and NADbank.

Heading west, Winnipeg residents must be wondering what hit them, having just celebrated the return of their beloved Jets to the NHL last season.  But with their team on—or rather off—ice for now, the Jets fans will be looking to fill their leisure time.  Despite the fervour with which Winnipeggers embraced the return of the NHL, they likely have long practice at the pursuing other activities. Research shows that  Winnipeg residents like to attend country music concerts.  An evening out at the dinner theatre or a casino could be on the cards, while those who stay at home might take in a card of another sort by tuning into professional wrestling.  The live sports fix in Winnipeg, and the only big draw in town before the Jets returned, used to be the Blue Bombers of the Canadian Football League, whose large crowds have set records and surpassed the 260,000 mark in attendance last year.  There’s no denying that the ‘Peg is a hockey town, but it’s also a football town and the Bombers have a firm grip on their hearts for what remains of the CFL season.

Moving into Alberta, the lockout will hurt in Stampede country, where the Calgary Flames have been absent from the playoffs for the past three seasons and just missed postseason play by a few points to the eventual champions, the Los Angeles Kings.  The void has been partially filled this fall by the CFL’s Stampeders, who will finish second in the West Division and look forward to the playoffs.  CFL attendance, not surprisingly, scores high in Calgary, but they also score very well for going to NHL games, so once the Grey Cup final is decided on November 25th, Calgarians will be looking for their sporting fix elsewhere.  While they love to attend lacrosse games, the National Lacrosse League’s Roughnecks won’t start play until the New Year, leaving the void to be filled by the Western Hockey League’s Hitmen.  On TV, Calgarians will probably turn on as many sports as they can, with football, basketball and golf all scoring high in surveys.  One thing is certain: even in a sports town like Calgary, the Flames leave some pretty big shoes to fill.

The Alberta rivalry between the Flames and Oilers is one of the all-time classics in the NHL, and Edmonton will no doubt feel the loss of NHL games among its residents.  But there are many similarities in the leisure pursuits of these two Albertan cities, despite the intensity of their sporting rivalry.  In Edmonton, the CFL Eskimos are battling for a playoff spot, so the sports fans are likely to be absorbed with their season while early-season NHL games get cancelled.  Edmonton residents attend hockey games at higher rates than the general population, so the loss of one of the big draws in the town will have them looking for other diversions, including rock and country music concerts.  Of course, a healthy playoff performance from the Esks could be just the tonic they need, at least until the end of November. They will, of course, take their football fix on the TV, where they show high rates for watching the NFL and a raft of other sports.  Some will get their hockey fix by strapping on the blades themselves and playing recreationally, though nothing will take the place of the Oilers in the hearts of this city’s hardcore fans.

The final stop on our western NHL swing is Vancouver, where the winter rains are starting and the BC Lions of the CFL sit atop the West Division.  The sporting scene is on the rise in Vancouver, with the Canucks enjoying success the past few seasons.  The Vancouver Whitecaps, in their second MLS season, have become the first Canadian franchise to make the playoffs in that league, where they now face the daunting task of taking on David Beckham’s LA Galaxy.  Still, there’s nothing like the Canucks in Vancouver and this hockey passion is borne out by the high rates of residents attending games at GM place when compared to other cities.  Those who watch the ‘Nucks on the tube will be flipping over to basketball, according to the data or, perhaps, finding their escape in sitcoms, drama series or music videos.  With the variety of outdoor activities available in the area, some will take to the slopes for snowboarding or skiing while others will exercise indoors at yoga or Pilates classes.

Of course, hockey fans of all stripes and of all teams have been expressing in blogs and  around office water coolers their desire for both sides to resolve their differences and get back to playing games.  In this hockey mad land, only then will there be joy across the land and fans can all say, like we used to in the road hockey games of our youth, “GAME ON!”