Geek Of The Week: Tony Lea

Anthony C. Lea, Ph.D., is a pioneering geodemographer and a world-renowned leader in geographically oriented marketing research. As the Senior Vice President and Chief Methodologist at Environics Analytics, he guides all of EA’s research and development initiatives, demographic estimates and projections, WealthScapes and site evaluation models. His curriculum vitae runs 38 pages, single-spaced, and lists more than a hundred scholarly papers he’s authored or delivered at conferences around the world. He’s served as a professor at a half-dozen universities in Canada and the U.S., earning a reputation as an old-school academic whose demanding exams struck fear into those less than committed to the rigorous study of geography and quantitative methods.

And yet, despite this formidable reputation, Tony Lea may be the most entertaining man in the marketing information industry. He dispels dull meetings with a few choice wise-cracks and periodically aims the NERF-gun in his office at colleagues puzzling through challenging research problems. He used to keep a dart board in his office with a map centred over the bullseye—his private joke about the imprecision of most site location models.

“I guess I’d describe my humour as British—no, silly . . . maybe a little pre-teenager,” Tony finally offers. “It probably comes from my father, who liked to tell silly jokes. He’d say, ‘Look at that cemetery. People are just dying to get into it.’” Tony no doubt honed his lighthearted style growing up in a rough-and-tumble family of seven and, for eight years, serving as the assistant director and director of the Bayview Glen Camp, where he regularly performed in camp theatrical productions. “I used to play Toto the dog in the camp skits or the wolf in Little Red Riding Hood,” he laughs. “I was usually an animal. And as the senior guy, I was always the one who’d get thrown into the water during post-camp clean-up day.” Later he became the CEO of the Bayview Glen private school and summer camp, and in 1983, the school’s chairman.

It takes an uncommon man to plumb both the highest realms of marketing research and the lowest brows of sophomoric humour, and Tony’s pedigree puts him squarely in that category. His family helped settle the city of Toronto. The well-known community of Leaside is named for one of his ancestors, John Lea,
Tony Lea (left) with his friend David Huff—that’s right,
creator in 1963 of the groundbreaking “Huff model”—in 2005

who immigrated to York, Upper Canada, in 1819. One of John Lea’s sons, William Lea, built “Leaside,” an octagonal house at Lea and Laird Drive which later burnt down and was replaced by a farmhouse where Tony’s father was born, in 1919. Not long afterwards, the family sold their 1,000-acre farm and moved to Forest Hill. And with proceeds from the sale, the Leas sent many of their seven children to university.

Raised in Forest Hill, Tony describes his upbringing as upper-middle-class—“we went to public school and didn’t go skiing at the most expensive resorts,” he recalls. Tony’s father worked as a salesman for a packaging company that supplied cereal boxes for Quaker and beer labels for Molson. His mother was a physical education teacher turned homemaker who helped her five children become adept at swimming, shooting a bow and arrow, and paddling a canoe. Tony recalls being a good student who, like his brothers, initially went into academia. He attended the University of Toronto, where he earned all of his degrees in geography: a bachelor’s degree with honours in 1971, a master’s degree two years later and a doctorate degree eight years after that. His doctoral thesis, “Towards a Theory of the Public Space Economy,” examined how to value hard-to-quantify entities such as an educated populace. Tony describes the work as “1,700 pages of welfare economic equations.” For his doctoral thesis review committee, most of his judges consisted not of geographers but economists.

“It was difficult to get a good grade in my classes,” Tony concedes. “The word would go out that only fifty percent passed the Christmas exam.”

In the early 1970s, Tony began teaching at a number of universities, including the University of Minnesota, Queen’s University and the University of Toronto. He typically took on upper-level courses in statistics and mathematical modelling, and became known as a popular professor with a good sense of humour but mind-numbing exams—anything but an easy-A.

“It was difficult to get a good grade in my classes,” Tony concedes. “The word would go out that only fifty percent passed the Christmas exam.” He liked to start a class with an unsolved problem and then ask a student sitting close to his desk to go to the blackboard and solve it in five minutes. “Eventually, no one wanted to sit in the front of the class,” he says, adding that he liked his tough-guy reputation. He recently attended a conference where one of the speakers, a former student who’d become an executive with an information company, opened his remarks by saying, “My statistics professor is sitting in the third row, and I confess I wasn’t very good in his class.” Tony retells the story almost proudly. 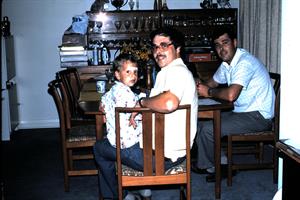 For 25 years beginning in the late 1970s, Tony juggled positions in academia and the private sector—often at the same time. In 1982, while teaching at the U of T, he joined Compusearch, the marketing analytics company, where he later met Jan Kestle, EA’s founding president. In that period he also added teaching a graduate course at Queen’s University to his resume, working three jobs simultaneously. To meet some project work deadlines, he recalls working late at night with his toddler son John curled up in a sleeping bag on the floor in his office.

Weary of the grind, in 1986 Tony left Toronto and became research director of a hospital in Dallas. But after a year, he returned to Toronto and a new teaching job, this time at Ryerson University’s Applied Geography Department. He rejoined Compusearch as the research director in 1991, and later (under different owners) as, Senior Vice President of Compusearch and then Managing Director of MapInfo Canada. Tony’s grueling schedule returned, and it didn’t help that he liked burning the midnight oil, routinely sending out emails in the middle of the night. “Some of my academic colleagues would call me at one in the morning,” says Tony, “because they knew I’d be up and ready to talk.”

In 1997, Tony experienced the first of two heart attacks—the second occurred in 2002—which earned him a stent, regular medication and a vow to cut out the all-nighters. He left MapInfo and became the Senior Research Associate at the Centre for the Study of Commercial Activity at Ryerson University. But Tony still missed the private sector. When Jan Kestle launched EA in 2003, he helped lay the groundwork and became one of the first employees of the new company, rejoining many of his former Compusearch colleagues as Senior Vice President and Chief Methodologist. 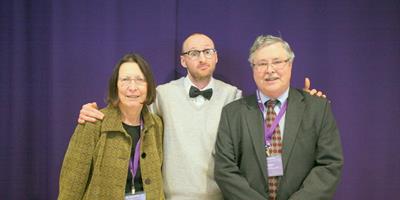 
Since then, Tony’s provided innovative approaches in the development of every major dataset offered by EA—PRIZM, DemoStats, WealthScapes, CensusPlus and NHS Plus—and helped develop solutions to hundreds of client projects. He’ll tell you that his most gratifying moment came with the 2004 launch of PRIZM CE, the first geodemographic segmentation system built by integrating demographics and psychographic values. As Tony explains his job, “I monitor the methodology, particularly the advanced, model-related stuff, and some of the trickier survey stuff. It’s usually background work that the geekier people of the company brood about.”

Tony observes that the favourite part of his job is working with fellow members of the Custom Research Department. Team members meet often in his cluttered office, piled high with reports and books from a lifetime of research, to brainstorm on how to create new variables or answer a client’s question. “I like to work with others solving a problem where the objectives are known and you need to figure out which of several methods would work best,” he explains. “A good method with good data can make a huge difference in generating effective solutions to many social science and business problems.”

Although he still exhibits workaholic tendencies—“I don’t have much of a work-home balance,” he confesses—Tony does like to relax in the bush, going camping, hiking and canoeing. “Times have changed. I used to go walking for ten miles, though now two miles are fine,” he says. “And now I go into the bush with GPS equipment.” He owns a cottage on Old Man’s Lake—“It wasn’t named after me,” he quips—and he’s the kind of DIY homeowner who owns a welding machine and two chain saws for fix-it projects like repairing boats and building docks. Every year, he’ll go hunting—“for grouse, not deer,” he specifies—and fishing, for bass, trout and pickerel.

Back in the city, Tony has stayed close to Leaside. In 2002, five years after his wife Barbara succumbed to kidney cancer, he married Joanne Tofani, then the Vice President of Marketing Research for CIBC, and they settled in a Leaside house only five doors away from the original Lea farmhouse, in a neighbourhood classified Young Digerati by PRIZM C2. And earlier this year, Tony and his son John, a 33-year-old attorney, spoke at the 100th anniversary celebration of Leaside, joining Prime Minister Steven Harper and Ontario Premier Kathleen Wynn for the festivities. “I spoke briefly about the early history of Leaside and my family’s role,” Tony says. “They were very kind to me.”

In fact, Tony has received plenty of recognition over the years, though more for his work than his family name. He’ll tell you he most appreciated receiving the 2001 Award for Geography in the Service of Government and Business from the Canadian Association of Geographers, which recognized his career contributions to business research. “At the time, I hadn’t participated in academia directly for many years,” he says. “But they were aware that I had developed Canada’s first geodemography course at Ryerson in 1987 and had contributed to educating many future leaders and business folks in applied geography at a number of Canadian and U.S. universities.”

Even with all the awards and accolades, Tony still puts in long hours at EA. And he continues to teach new generations of geodemographers as an adjunct professor with both the School of Applied Geography at Ryerson University and the Department of Geography at the University of Toronto. Apparently, he’s having too much fun to stop.

“I enjoy working on research in general and on geodemography in particular,” he explains. “I like working with bright clients with reasonable expectations in association with knowledgeable and skilled colleagues. And I most enjoy quantitative methodological challenges, new techniques, new algorithms and new programs. I also like teaching university, especially grad students. I just hated the grading of essays and academic politics.”

That’s a lot of positives and only a few negatives for a man who walks the tightrope between the serious and the silly. For Tony Lea, that’s the most interesting place to be.