Geek Of The Week: Colleen Middleton

Go ahead and try to beat Colleen Middleton in a Sudoku showdown. You probably won’t. The unofficial Soduko champion of Environics Analytics (EA), Colleen is a brainteaser wunderkind, completing those maddening 9-by-9 number puzzles with speed and ease—much to the frustration of her coworkers-cum-competitors. During one round, Colleen even gave her opponents a 10-minute head start, only to fill in each square a couple minutes later. “I’ve won every single round,” she says teasingly. “I’m not boasting. It is a fact.”

Colleen credits her winning streak to gymnastics—or more precisely to waiting out the long stretches of time between her childhood gymnastics classes. When she wasn’t practicing backflips, she was killing time by figuring out the numbers.

Intrigued by an older sister’s involvement in competitive gymnastics, Colleen enrolled in the sport at age seven. But with a dislike for the balance beam, Colleen instead chose to concentrate on the parallel bars and vault. Even a wrist injury that left her out of commission for two weeks didn’t deter her drive, as Colleen spent her recovery time analyzing how she could refine her routines. “It’s like my coach said: I got bit by the bug for the love of the sport,” she says. “Gymnastics was really true love for me.”

Practicing three to four times a week—with some sessions lasting five hours— Colleen became proficient enough to compete at the provincial level, participating several times at the Ontario Championships, where she placed fourth in her final year.

“With gymnastics, it’s so interesting how much physics plays a role in everything you do,” Colleen says. “When doing a specific move, you’ve got to look at how you are going to move yourself to propel your body. You have to be analytical.” 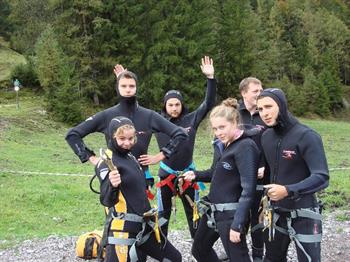 After hanging up her leotards and retiring her tumbles at age 18, Colleen now applies the same analytical approach and dedication in her role as a Research Analyst for the standard research team at EA. Since joining the company in January, Colleen has spent much of her time working with Alteryx and ENVISION5, creating maps for clients and providing other geodemographic-related services, like generating client lists and custom trade area reports. “I really like getting a new a customer data set,” she says. “It’s fun to explore the data and work through all these problems you come across. You kind of ask yourself: Is it a clean data set? What do I need to do to get to that end product? It’s everything in between that’s just most exciting.”

And as the middle child to a mother who was a computer programmer for Hallmark and a father who is a carpenter, Colleen seems to have inherited a knack for attention to detail. “She’s very dedicated,” says Philip Tanaka, the director of standard research. “She tries to do her job well and puts in a lot of effort. And she really tries to get the job done the right way.”

For Colleen, discouragement is not an option; she views asking questions as the best way to succeed. Admitting she can be time management-challenged, Colleen battles occasional stress with a heavy dose of optimism and, according to fellow research analyst Amy Buckland, by singing while working. “It’s usually something from Hanson, Third Eye Blind or anything off the Songza playlist entitled ‘Singing in the Shower – 90’s Edition,’” Amy says.

A self-described thoughtful child who could never make up her mind, Colleen spent much of her time flip-flopping between future career ideas. But when her dreams of becoming an author or mermaid didn’t pan out—she was, and still is, an avid Disney enthusiast—she accepted a suggestion from her mother to pursue geography at Ryerson University. Graduating in 2013 with a degree in geographic analysis and a minor in politics, Colleen went on to pursue a master’s degree in spatial analysis.

IMAGE WITH SISTER“I went to the preview day for the program and it really opened up a lot of ideas that I didn’t know were possible with geography,” she says. “I didn’t even know what GIS was back then, but it made me realize that there’s a lot I can do in this field.”

Curious about the world in both 2-D and 3-D forms, Colleen has collected a number of passport stamps visiting countries such as Austria, Germany, Italy, China, Vietnam, Thailand and Laos. Her travels have taken her canyoning in Europe for a field study and backpacking through Asia, but it was on a trip to Laos that she fell in love with the town of Vang Vieng with its river and mountains, and where she danced the night away with Laotian families at her homestay. “It was amazing just getting to share that adventure with my close friends and experiencing a completely different place from home,” she recalls.

Currently, Colleen’s home is her childhood neighbourhood of East York, where she resides with her parents and two sisters. Classified by the PRIZM5 segmentation system as Street Scenes (younger, upper-middle-income singles and families), the aging houses retain a hint of the location’s previous PRIZM C2 name, Old World Style. But according to Colleen, the area has changed significantly through the years and its new segment name aptly reflects recent shifts. “In the neighbourhood where I live, there are families who haven’t left for a long time,” she says. “My dad grew up just five streets away and my grandma still lives there. The house I grew up in used to belong to my dad’s best friend, who now lives just down the street. But in the last five or 10 years, a lot of new, younger families have moved into the area. It’s a nice little pocket. There are schools, baseball parks and a lot of green space.”

Although all too rare this year, most summers she’s managed to take a little time off to escape to a family friend’s cottage, where her ideal day off involves sleeping in, swimming, reading, drinking beer and reflecting on her career so far (though not necessarily in that order). “I’m still so new and I’m learning so much,” she says. “When I first started, I was doing things I had never have done before. Alteryx was new to me. Now it’s not, but it’s always an adventure.”

Colleen says a high point at EA was completing her first spec back in January. But even with all the new technology and software she has had to master in the past eight months, if you ask her what’s the biggest thing she’s learned so far, she laughs: “Seriously finding out how good I am at Sudoku.”