Geek Of The Week: Zane Patel

When Zane Patel was a kid, flipping through the daily newspaper was a routine part of his mornings. But unlike other children who’d turn to the comics section, Zane zeroed in on the baseball box scores. Like any self-respecting geek, Zane devoured baseball statistics, especially those of the Toronto Blue Jays, and that data-obsessed mindset continues to this today.

“I’ll tune into a random game just to watch as much baseball as I can,” he says. “People don’t realize there’s so much data behind a lot of the game. I think baseball is a very traditional sport, but it’s slowly moving towards data-driven analytics.”

A non-partisan sports fanatic, Zane has also been known to cheer for the Toronto Maple Leafs and Raptors from the sidelines, but he’s not just a spectator. He likes to participate on the courts and fields through recreational leagues for floor hockey, softball and golf. He views his active lifestyle as a reprieve from his other passion: working with numbers. 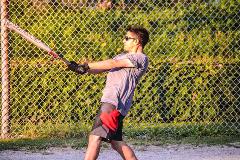 Zane during a game of softball in the summer.

While a younger Zane contemplated a career in optometry or law, an unshakeable love for numbers lead him to pursue a business degree with a major in finance at Wilfrid Laurier University, where he graduated in 2010. But after landing a job as a research analyst at Synovate—which later merged with IPSOS Reid—Zane found his fondness for finance soon overwhelmed by an interest in market research. His position involved setting up web surveys and then analyzing the results, but Zane quickly realized he really only enjoyed the latter portion of the job description.

In November 2013, Zane applied to Environics Analytics (EA) as a client advocate for the financial, insurance, telecommunications and travel practice team (FITT). For him, the move was a chance to “return to his roots” and connect with like-minded colleagues.

“At the time I joined, there were probably only 70 employees at the company,” he says. “I just think that a small company suits my personality more. I really like my teammates. We’re very close, and we’ll hang out after work pretty often, do team lunches and grab dinners and drinks together.”

Aside from regular coffee runs to McDonald’s, Zane acknowledges that his role as client advocate doesn’t have a real routine.  A common schedule may involve working on projects, juggling early morning meetings and spending his days producing deliverables in Excel, PowerPoint and Tableau. “I don’t necessarily work 9 to 5,” he says. “I work as much as I need to work to get a job done. If the light bulb in my mind goes off at 11 p.m., I’ll open up Tableau and do some work at 11 p.m. I’m a night person, so I actually prefer working at night.”

As with most jobs, Zane faced a learning curve when he first joined EA, and he worked hard to learn the ins and outs of EA software, not to mention who did what around the office—officially and unofficially. After two years, however, Zane says his current challenges lie in making sure he understands exactly what the clients want. “Our clients have such different objectives that there’s no one simple solution,” he says. “For every project, you have to tailor your analysis and results to exactly what your client is looking for.” 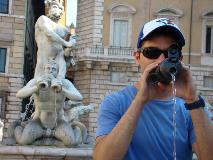 Zane humorously embraced the notion “When in Rome, do what the Romans do.”

A self-described  easy-going individual, Zane observes that his relaxed nature helps him cope with the inevitable stressors at work—that and his humour. When fellow FITT client advocate Vincent Ng is asked to describe Zane in one word, “punny” is what comes to mind. “One time, Zane offered one of our team members a mint, but she turned him down,” Vincent recalls. “And he just looked at her and said, ‘Why not? They’re in mint condition.’ Everyone groaned.”

The creative wordplay probably can be traced back to a tradition Zane had of writing poems to his teachers at the end of each school year—a practice encouraged by his mother as a “thank you” gift for a year’s instruction. To help in those literary efforts, Zane’s first book was a thick rhyming dictionary, which led, inexorably, to a love of rap and hip-hop. “Around grade 7, Eminem’s ‘Marshall Mathers LP’ came out and pretty much changed my life,” he says. “Ever since, I just love how words can come together.”

“Come together” is also a term Zane knows all too well: living in the downtown core, Zane spent much of the past month surrounded by birds of a particular feather: Blue Jays’ fans. And while his most recent move brought him to an area near the Air Canada Centre—as a sports fan, the location is prime—he spent much of his childhood in Mississauga with his parents—his mom was a teacher and his dad’s in pharmaceutical sales—and two younger sisters.

Classified by EA’s PRIZM5 segmentation system as Asian Sophisticates (upscale, urban Asian families), Zane agrees that the diverse streets where he now lives are similar to those he knew in his childhood neighbourhood. However, when he walks those Mississauga streets, he sees first-hand the rapid changes that can redefine a community. Originally classified by EA’s PRIZM C2 segmentation system as a Younger Families (F1) lifestyle stage, the area is now designated in PRIZM5 as Diverse Older Families (F9). “You can tell the people in my old neighbourhood have been around for a while,” he says. “As I’ve gotten older, our neighbourhood has grown up, with more development and taller trees. We don’t get as many kids around the house at Halloween anymore—everyone who was trick-or-treating at 7 years old are now older, now my age.”

Like current members of Asian Sophisticates, Zane often travelled with his family within Canada and the United States. “Growing up, we did the usual family stuff like Disneyland, Disneyworld, New York and all-inclusive beach vacations,” he says. “Sometimes, my dad would bring us along on business trips as well as to places like Kingston, Ottawa, Montreal and Newfoundland.” 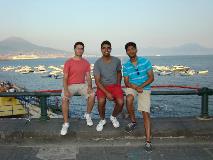 While in Italy, Zane and his friends hiked Mount Vesuvius, which can be seen in the background.

Years later, Zane continues to enjoy travelling when he’s not working. His globe-trotting adventures include backpacking trips to countries like the Netherlands, Germany, Czech Republic, Spain, Austria and Italy. And according to Zane, the best pizza isn’t found in Rome, despite popular opinion, but Naples. Asked which city he’d consider moving to, Zane replies that Munich and Vienna rank high on his list.

Back home, he concedes he’s got little to complain about—what with a good job, close friends and family, and days filled with sports. But he admits there’s one job he covets—and it comes as no surprise to his FITT teammates: “First assistant general manager of the Toronto Blue Jays,” says Zane, the perfect union of baseball, analytics and passion.