The Impact of COVID-19 on Population, Employment, Social and Economic Trends in Canada

Mar 25, 2021, 08:15 AM by Doug Norris
Environics Analytics’ Chief Demographer, Dr. Doug Norris, reviews the extent to which population subgroups were initially affected and how they have come back by the end of 2020

It was just over one year ago, March 11th, 2020, that the World Health Organization characterized COVID-19 as a pandemic. Shortly following, Canada’s federal and provincial governments declared various international travel measures and closures and restrictions for businesses and organizations. In subsequent months, some businesses could partially reopen with conditions that varied from province to province and according to the level of COVID-19 infections and hospitalizations in their respective area. Many of the fluctuating restrictions are still in place today, and unsurprisingly, these measures dramatically affected economic activities. The extent to which population subgroups were initially affected and how they have come back since the end of 2020 is briefly discussed here.

Little or no population growth across provinces

In the year before the pandemic (2018-19), the Canadian population increased by 1.4% to reach 37.6 million. Approximately 80% of this increase was due to high international migration, a combination of new permanent residents and net non-permanent residents – mostly students and temporary workers.

Following the start of the pandemic, in the six-month period from April-September 2020, the number of new landed immigrants fell to 74,000 from close to 200,000 a year earlier. Furthermore, the number of net temporary residents was negative (-90,000) as fewer arrived, and many went home. The net result was that total net international migration was negative and balanced a small natural increase.  With the lack of positive international migration, population growth for the 6-month period was 0.1%, compared to 1% a year earlier. All provinces showed little or no growth.

Data were not available for the Oct-Dec quarter, but it is likely to show a continuation of no growth that may continue into at least the first half of 2021. For the longer term, and in part to make up for the drop in immigration, in November 2020, the federal government increased targets for permanent residents by 50,000 to 401,000 for 2021, 411,000 for 2022 and 421,000 for 2023. To move towards the new targets, in February 2021, the federal government announced a relaxation of permanent resident requirements for persons already in Canada as students or temporary foreign workers.

Working from home was not possible for everyone. Therefore, many were laid off and out of work. In April 2019, 18.8 million persons were employed. A year later, in April 2020, the number of employed persons dropped by 15% to 15.9 million. Close to 3 million were out of work compared to a year earlier. Of these, about half were classified as unemployed, increasing the total unemployed to 2.4 million (rate of 13.4%) – double the levels a year earlier. About half of those out of work were not classified as unemployed since they did not look for work and instead were counted as not in the labour force. Between April 2019 and April 2020, the labour force dropped by 1.5 million.

Following the April 2020 low point, employment levels slowly increased and reached a high of 18.4 million in December before dropping back to 17.9 million in January, resulting from another business shutdown, mainly in Quebec and Ontario. The January 2021 employment remained just over 800,000 (-4.6%) lower than January 2020. The unemployment rate was 9.4% in January 2021. With the rise in employment, the labour force numbers picked up and in January stood at 19.9 million, very close to the level a year earlier and up from a low of 18.5 million in April 2020.

All provinces and territories had similar employment drops, but the drop varied depending on the restrictions in place and the business mix. Above-average drops occurred in Quebec, Newfoundland and Labrador, British Columbia and Alberta. By January 2021, employment levels had come back in most provinces but were still 2%-6% lower than a year earlier. In Newfoundland and Labrador, Nova Scotia and New Brunswick, levels were back closer to the employment levels a year earlier.

There was much variability across industries in the ability to work from home, and there were also differences in restrictions placed on essential and non-essential services. The result was much variation in the drop in employment as of April 2020. Table 1 summarizes the situation for selected employment characteristics. 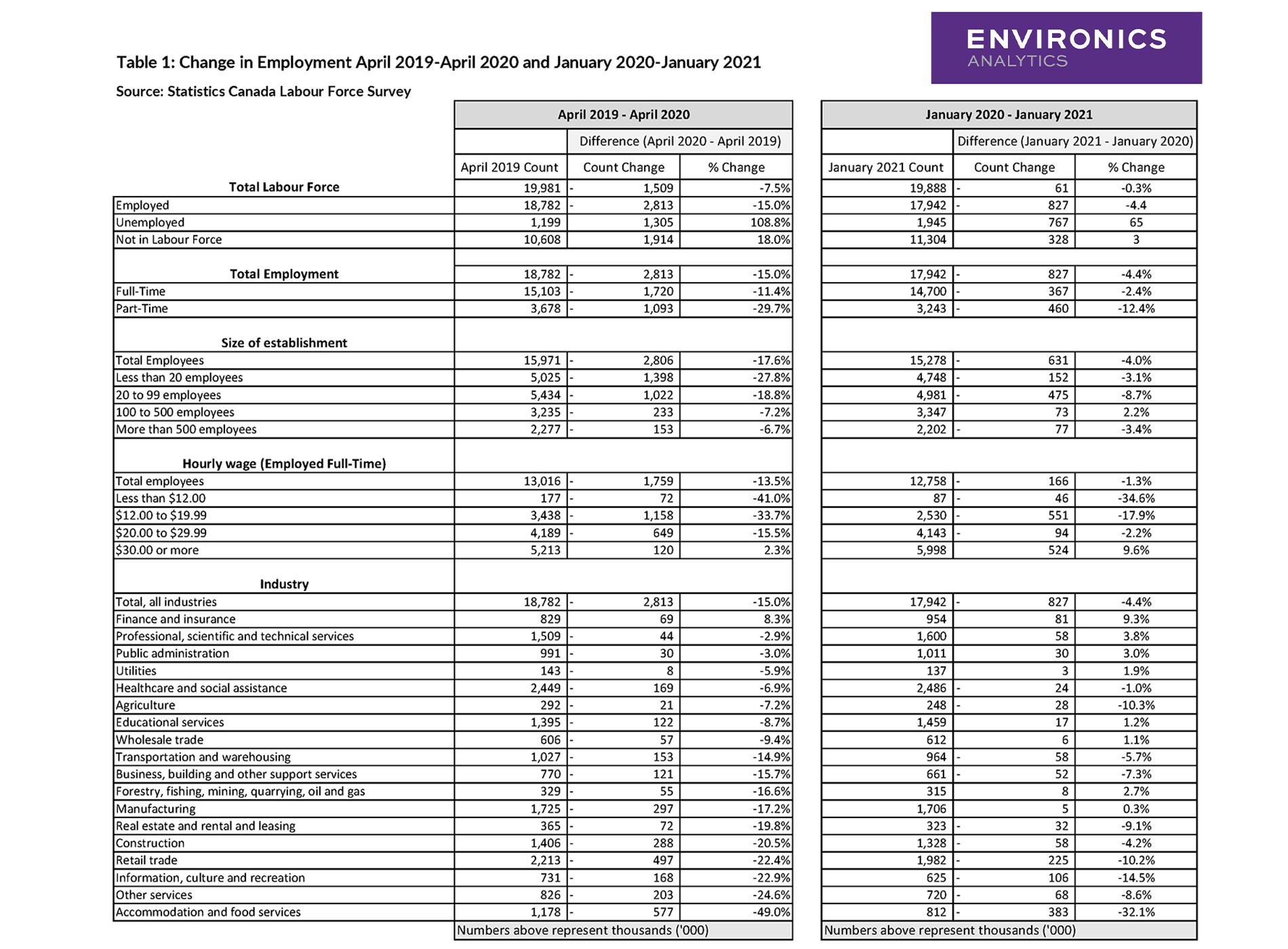 The year-over-year drop in total employment for April 2020 was 15% but it was much higher for part-time workers (30%) than full-time workers (11%). This change reflects that part-time workers were concentrated in retail and food services industries that were most affected by restrictions. Among full-time employees, loss of employment was greatest for those making low wages, down by 35% for those making less than $20 an hour compared to 16% for those making $20-$30 an hour. Higher-paid jobs showed no drop in employment levels. Small establishments (less than 20 employees) were also hard hit, showing a drop of 28% compared to a 7% drop for the largest establishments.

Table 1 also shows the April 2020 drop in employment by industry. All industries except finance and insurance had lower April employment than a year earlier. The finance and insurance industries had increasing employment in the pre-pandemic months and were not significantly affected by the pandemic. Other larger industries with lower losses of employment were scientific, technical and professional and public administration, where many jobs could be done by working from home. The healthcare and social assistance group was down by 7% as this includes many essential workers. At the other extreme, the accommodation and food services businesses showed a drop of nearly 50% and retail trade was down 20%.

As shown in the right-hand panel of Table 1, as of January 2021, some categories had fully recovered, and employment was up on a year-over-year basis. Generally, these were groups that had taken a lower hit in April. On the other hand, employment was still down by more than 10% for some larger groups including part-time workers (-12%), low-wage full-time workers (-18%), retail (-10%) and accommodation and food services (-32%).

The pandemic’s impact on overall economic activity can be measured by the monthly Gross Domestic Product (GDP). For the 12-month period ending in February 2020, the GDP increased by 2.5%. By April 2020, the GDP was down 17.7% from the February level. In subsequent months, GDP slowly increased until November, when it was still 3.5% lower than February.

Household income, household spending and savings are part of the System of National Accounts and are reported on a quarterly basis. Table 2 summarizes this data for Q4 2019 to Q3 2020. Household disposable income increased by 1.4% in the first quarter of 2020. The second quarter disposable income increased substantially and was 12.7% higher than in the last quarter of 2019, even though employee compensation was down by 9.5%. The difference was due to the increase in employment insurance benefits and other special income benefits put in place by the government to lessen the financial impact of the pandemic. In the third quarter, disposable income dropped but remained 9.2% above the last quarter of 2019.

Although disposable income was up in the second quarter, household spending declined and was 16.3% lower than in Q4 2019. It rebounded, increasing 13% in the third quarter but remained down 4.6% compared with Q4 2019.

Pictured above: Q4 2019 to Q3 2020 summary of the System of National Accounts quarterly report of household income and household spending and savings data.

In the October 2020 Canadian Community Health Survey, nearly one-third of Canadians indicated that their mental health was somewhat or much worse than before the pandemic. Women (35%) reported higher levels than men (28%) at all ages. The age group with the highest level was 35-49, with 45% of females and 36% of males reporting their mental health was worse. This decline was likely at least in part due to the many challenges parents faced with young children out of school and learning from home, often combined with working from home themselves.

Far-reaching impacts of the pandemic on the lives of Canadians

The pandemic has had a wide range of effects on the lives of Canadians. For some, employment was lost; for others, the workplace has shifted from the office to home. During this time, there was significant employment variability across industries due to differences in restrictions placed on essential and non-essential services, which continue to this day. The increase in disposable income coupled with the drop in consumption meant that savings were up. It remains to be seen how close Canada will come to meet new population growth targets. One thing that seems certain is that there is great diversity in the way households have been affected and how they will behave going forward.

Watch the full presentation about the impact of COVID-19 on various social and demographic trends in Canada. 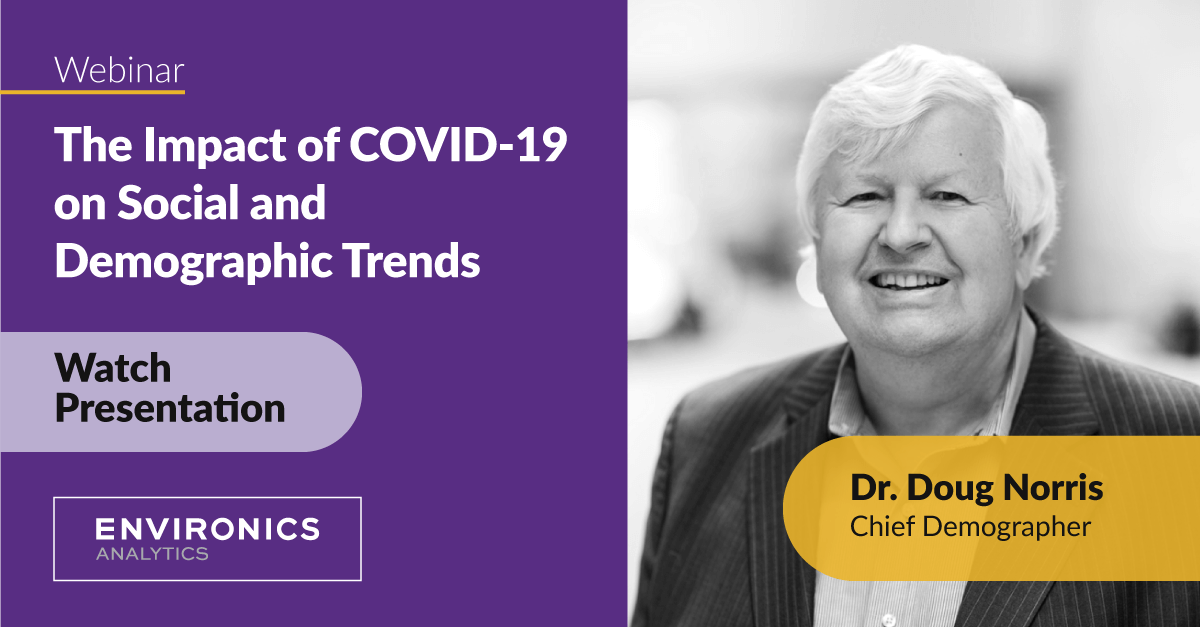 Read: Canada 2020 and beyond - what marketers should know about changing demographics

This is part one of a two-part report and focuses on the impact COVID-19 has had on population growth, employment levels and the overall economy as measured by GDP. Part two will focus on the impact on retailers, restaurants, food and beverage establishments and the specific implications for marketers.

Doug Norris is a Senior Vice President and Chief Demographer at Environics Analytics.