Feb 28, 2020, 12:25 PM by Doug Norris
What marketers should know about changing demographics

The size and makeup of Canada’s population are continuously changing in response to various demographic trends. Understanding these trends is essential for making decisions, such as where to locate a new facility or how to determine the best mix of product and service offerings. And more change is ahead. Here is what to expect over the next decade.

In 2019 Canada’s population is estimated to be 37.6 million. For many years the annual growth rate has averaged around 1% a year; however, recent growth has increased to 1.4% a year as a result of higher immigration. But going forward there will likely be a slowdown in population growth as a result of the increasing number of deaths due to our aging population.

Future population growth is likely to be highest in the largest metropolitan areas that attract most immigrants. Other urban areas will likely grow at below average rates while there may be an increasing number of rural and small-town areas that experience population declines. These different growth patterns point to possibilities for business expansion in large urban areas but perhaps some consolidation in small town and rural areas. In the larger urban areas, the increasing popularity of high-rise condos in the downtowns will likely result in increasing demand of tech-enabled services, such as online grocery stores and transportation alternatives like Uber, car-sharing and bicyclesharing.

The population aged 65 and over will increase by close to 60% over the period 2019-2036 as compared to an increase of under 10% for the younger population. This means that the older households’ share of consumer expenditures will also increase and marketing to the older population will be increasingly important for the bottom line.

The aging of the suburbs presents challenges for both businesses and governments. Companies will likely experience a change in product needs as young families are replaced by emptynesting couples and older women living on their own.

Marketers, more than ever, will need to identify smaller niche markets. And businesses offering e-shopping and home delivery of products targeted to seniors are likely to become even more popular. With a population characterized by decreased mobility and many seniors living alone, municipalities will also face a need for better public transportation and more programs oriented to seniors.

The growing older population in their 70s and 80s is also likely to have a significant impact on the real estate industry as they look for suitable accommodations for their later years. Some will decide to downsize, others move to a retirement community or retirement home while still others will decide to remain in their homes but renovate to make them more accessible.

Regardless of location, the older population will increasingly look at new technology devices, such as monitoring devices or robotic adaptive living products, that will support and enable them to live longer and more independently in the community.

Aside from the high growth at older ages, marketers need to recognize the change in population sizes at the younger ages. The most dramatic change is expected to be a decline of 8% in the population aged 55-64 as this smaller “baby bust” generation replaces the larger Boomer cohort ahead of them. This smaller cohort will also cause only a slight increase in the younger age group, 25-34, who are the children of the baby bust cohort.

Future growth expected to slowly decline due to aging population 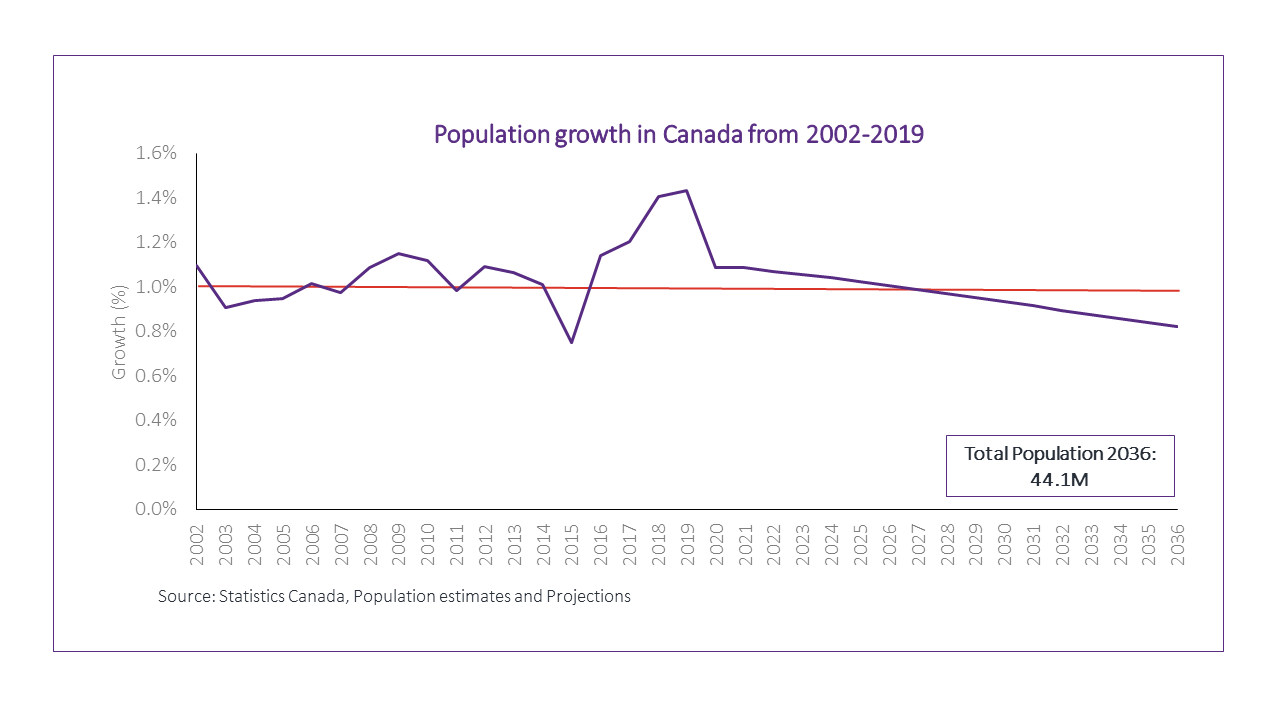 Today, 23% of the population are immigrants: the highest since Confederation. Over much of the past decade immigration averaged 250,000 permanent residents a year; however, the numbers have increased in recent years in direct response to government policy.

Past immigration trends have resulted in a changing face of Canada, especially in the larger metropolitan areas. In 2019, the “visible minority” population is now a majority in both the Toronto and Vancouver urban areas.

With Canada’s population drawn from many parts of the world, marketers need to understand how the needs and preferences of immigrants vary. Their past may shape the way new consumers hear and interpret messages, and marketers will need to consider these influences when developing promotion campaigns. A related question for consideration is the extent to which various groups consume ethnic media. Increasing diversity presents both opportunities and challenges for marketers. 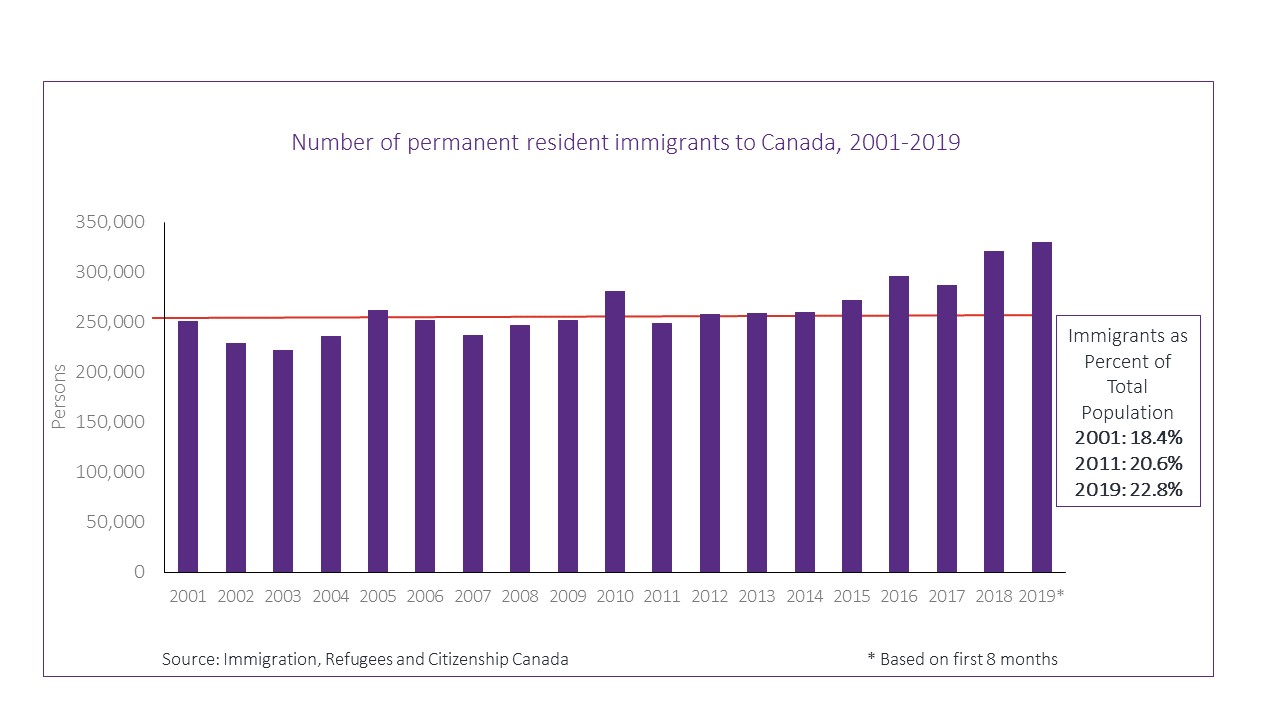 A minority of households with children

Growth likely to be in multigeneration and empty nest couples 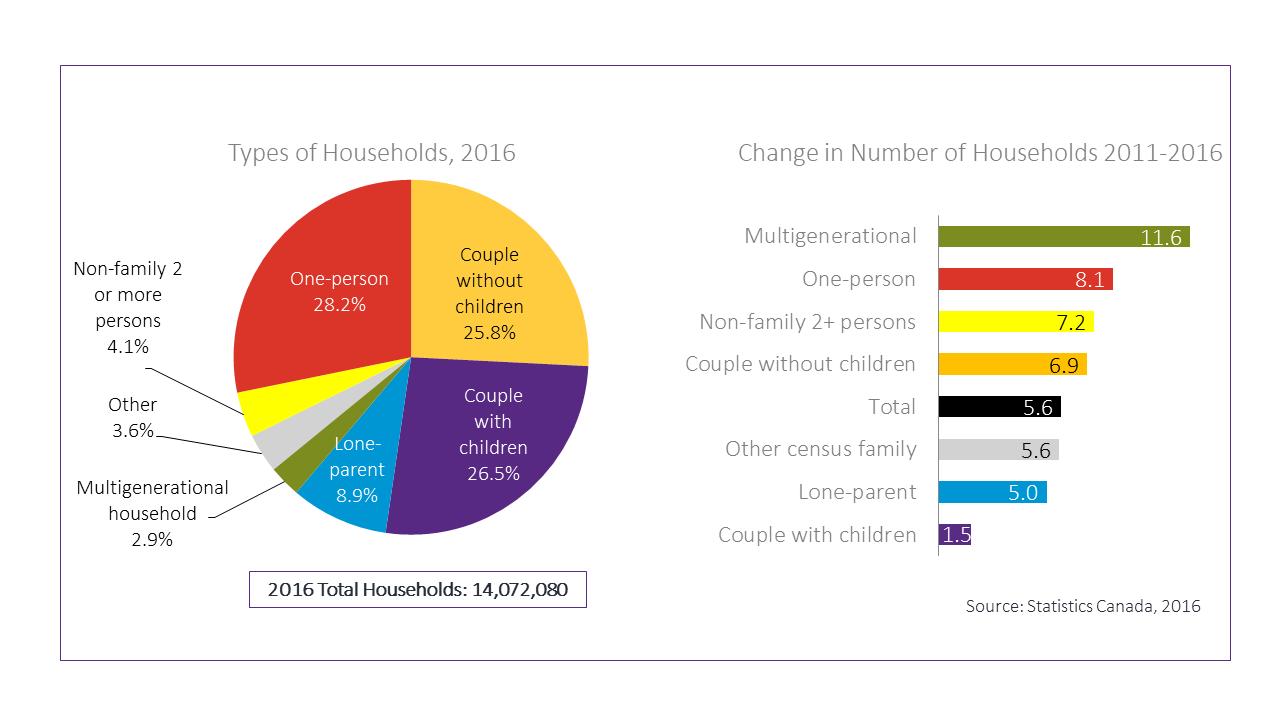 The high level of labour force participation, coupled with increasing levels of education, resulted in higher income increases for women over the period 2001- 2017; median income increased by 27% in real terms compared to a rise of only 6% for males. However, there remains a considerable wage gap. But the increasing income of women means that their share of total income continues to rise, reaching 42% in 2017 compared with 25% in 1976.

Young women with increased spending power will look for ways of better balancing work and family pressures but will also be looking to spend on themselves. In the mid-age years (25-64), over one third are either lone parents or are living in a non-family environment. These women have considerable spending power. And the large group of older Baby Boom women are a new breed of older female consumers. They are well educated, many having been in the labour force, and now with increased leisure time in an empty nest or solo living environment, they are looking for experiences and products that they could not afford while bringing up their children.

A look at the generations

In Canada, we can define the generations as PreBoomers (age 74+ in 2019), Boomers (54-73), Gen X (40-53), Millennials (24-39) and Gen Z (under 24). Relatively little can be said about the youngest Generation Z, many of whom are living at home and still in school. However, over the next decade, this generation of digital natives will replace the Millennials as a focus for marketers.

Today there are 8.3 million Millennials, but it is vital to recognize the diversity within the generation. Older Millennials are established in their jobs, have started families and have purchased their first homes, often in the suburbs. On the other hand, many younger Millennials are still in school or have recently graduated and are more likely to be found living alone in downtown apartments and condos. Family life and suburban living are ahead of them over the next decade.

Sometimes referred to as the forgotten generation, Gen Xers are well established in their careers and family life and are struggling to balance the two. Over the next decade, they will be in their prime earning years and will account for a high level of expenditures.

In 2019 Boomers numbered 9.3 million. Like Millennials, Boomers are a very diverse group. Younger Boomers are mostly employed and have older children living at home. Over the next decade they will face decisions about retirement and how to live out the next 20-30 years. Many of the older Boomers are retired and many are living as empty nesters or in the case of women, living alone.

But successfully marketing to this population requires that businesses change their historical approach. The Boomers are very different than their predecessors. They are more educated, more demanding and many have good incomes and considerable wealth. They look to enjoy their retirement years, filling it with many learning or leisure activities that they couldn’t do or perhaps afford while fully employed and raising a family. In many ways, they can be said to be re-defining retirement years. And they don’t want to be perceived as “old” but instead, view themselves as active and productive with much to contribute. Advertisers take note!

The consumer base will continue to evolve over the next decade and businesses will need to assess how the many trends play out in their trade or service areas. The growth, or in some cases the decline of the population, the changing age structure of consumers, the evolving cultural mix and the changing roles of women will all need to be carefully monitored by organizations if they plan to succeed in the coming years. 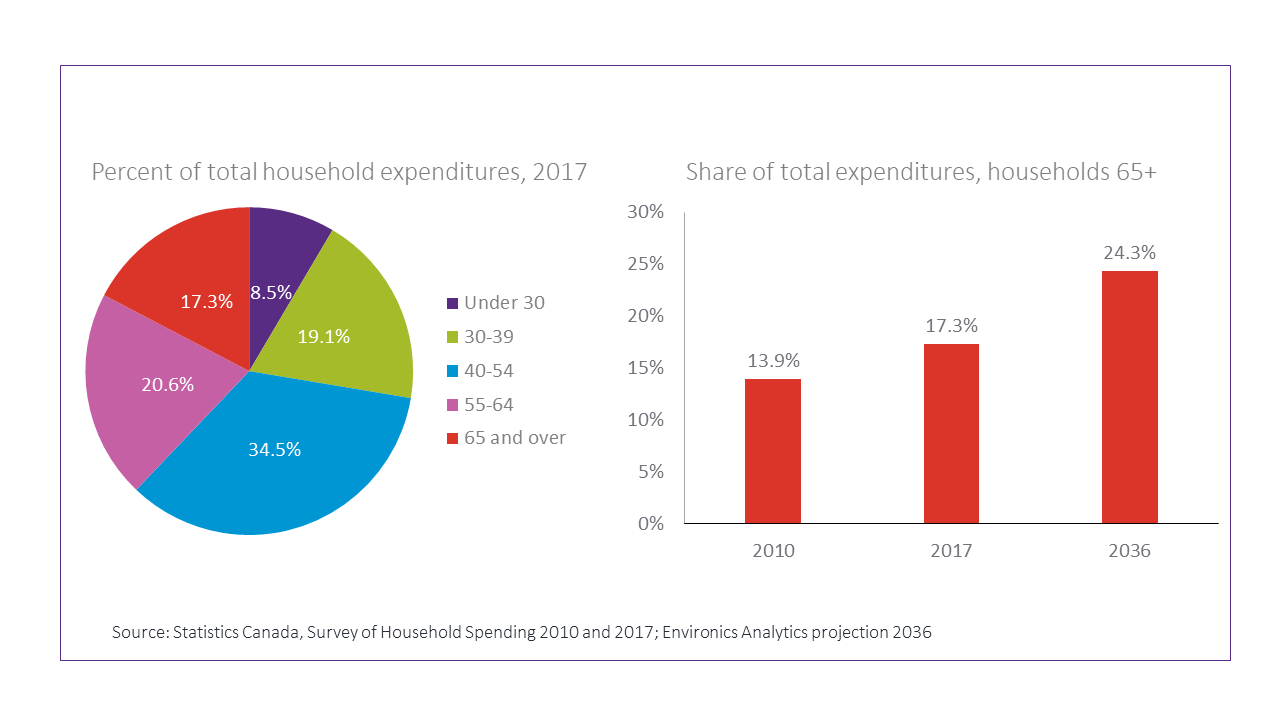 Read: The Impact of COVID-19 on Population, Employment, Social and Economic Trends in Canada

Doug Norris is a Senior Vice President and Chief Demographer at Environics Analytics.