This morning, Statistics Canada released the first data from the 2021 Census, covering the total population and dwelling counts for all geographic areas of the country.

Overall, about eighty percent of Canada’s total growth can be attributed to immigration, and during the pre-pandemic period, 2016-2020 period immigration was particularly high for international students and temporary workers.

The country continues to boast the fastest-growing population amongst G-7 nations much above the United Kingdom (2.9%) and the United States (2.6%).

Increased Growth in the Maritime Provinces

The provincial pattern of growth differed from the previous census period due to increased immigration levels and shifts in interprovincial migration due to the collapse of the resource sector.

In Alberta, Saskatchewan, Manitoba and Newfoundland and Labrador, population growth was down. On the other hand, the three Maritime provinces experienced their highest growth in 40 years due to immigration and gains in interprovincial migration, mainly from Ontario.

Among the provinces, Prince Edward Island registered the highest growth rate (8%), while at the other extreme, Newfoundland and Labrador experienced a small loss of population. 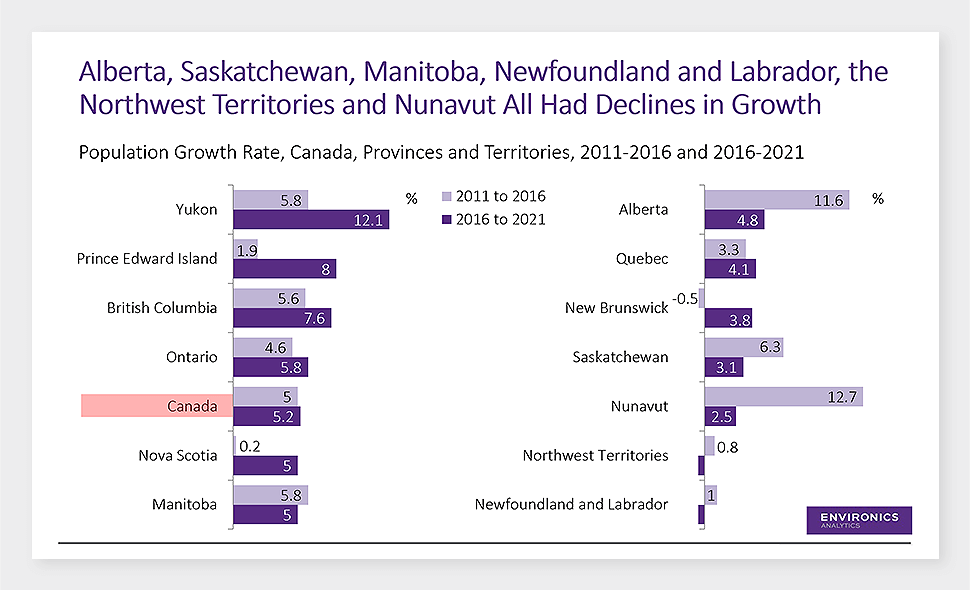 Pictured above: Population growth rates by province/territory for the latest census period (2016-2021).

There were six new census metropolitan areas (100,000 and over) for the most recent census period—Red Deer in Alberta, Kamloops, Nanaimo, and Chilliwack in British Columbia, Fredericton in New Brunswick and Drummondville in Quebec, bringing the total number to 41. The four fastest-growing CMAs were in British Columbia- Kelowna (14%), Chilliwack (12.1%), Nanaimo (10%) and Kamloops (10%) followed by London (10%), Kitchener-Cambridge-Waterloo (9.9%), Oshawa (9.3%), and Halifax (9.1%).

The largest CMAs grew at more moderate rates: Vancouver (7.3 percent), Toronto (4.6%) and Montreal (4.6%). Although these areas continued to attract a high number of immigrants, they actually experienced a net outflow of population to other parts of the province. It is likely much of this outflow stems from retirees moving out to smaller towns and rural settings as well as young families moving further away from the big cities in search of more affordable housing.

Among the smaller urban areas (CAs) with populations between 10,000 and 100,000, the fastest-growing were in what might be termed as resort communities and many were located within 150 km of the largest CMAs. This likely is, in part, a result of retirees moving out of the largest urban areas.

Slow Growth for Rural Canada but Also Many Declining Areas

Possible Implications of the Pandemic on Population Counts

There is no direct evidence of the impact of the pandemic on population numbers. However, it is possible the pandemic resulted in some of the growth in small-town and rural areas as a result of people moving out of the big cities. Also, it is well known that some students returned home to live with parents during the pandemic, some Canadians with cottages in more rural areas may have stayed there for extended periods and others may have temporarily moved to live with relatives.

These movements may have resulted in confusion about where to report their residence at Census time, or in some cases, they may have been missed or double-counted. Other areas where there may have been an increased undercount are in the North and perhaps the core areas of big cities. In previous censuses, such populations were enumerated in person with canvassers going door to door.

The extent of any undercount will not be known until the results of the coverage survey are completed and made available, likely in 2024. Although the pandemic may have had a minor impact on the population counts, overall, early indications are that Statistics Canada conducted a high-quality Census despite having to make many changes due to the pandemic.

In general, the good news is that the size of the national consumer base continues to expand. In fact, it seems likely that the national growth rate will further increase in the next few years because of higher immigration targets for the country.

However, growth patterns across Canada’s regions are continuing to change. The large urban markets will continue to grow as immigration is heavily concentrated in these areas. While the extent of growth in Alberta will clearly depend on the oil and gas industry, the young Alberta population provides built-in momentum for growth, and immigrants continue to be attracted to the province.

The Maritime provinces have shown a pick-up in growth and these provinces will look to continue attracting and retaining new immigrants. However, while marketers will have opportunities to create fresh relationships with new Canadians, they will need to recognize the changing ethnic mix of their consumers and perhaps develop new marketing strategies recognizing the changing diversity.

The movement of families and retirees away from large cities is likely to continue. At the same time, there is the possibility of more Canadians who can work—at least part-time—from home resulting in increased migration to smaller urban and rural areas. More retirees and workers in these suburban and exurban areas suggest opportunities for businesses to expand.

As more residents are drawn to downtown areas within the large urban markets, tech-enabled solutions such as online grocery services and transportation alternatives like Uber, car-sharing and bicycle-sharing will likely become more popular.

Although most markets will continue to experience growth, an increasing part of rural and small urban Canada will need to plan for population declines and an aging population. Businesses will need to adjust their product offerings, and governments may face challenges in maintaining emergency services, health care and social services like libraries and schools. Can technology address these challenges through online doctor visits, streaming story time presentations at libraries, and blended classroom and online education at the grade school level? This initial wave of census data raises intriguing questions, as will the upcoming releases, no doubt.

For a more detailed analysis of the first census results, including a granular look at change region by region, join our webinar on February 17 at 2:00 PM ET.

PRIZM® is a registered trademark of Claritas, LLC.