The third wave of data from the 2021 Census was released by Statistics Canada this morning, covering several topics, including marital status, families and households, income and all-new data on veterans in Canada, available for the first time.

Almost 40 percent of households have children at home

This data release revealed there were just under 15 million households in Canada in 2021, an increase of 6.1 percent from 2016. Sixty-three percent of households (9.5 million) consisted of at least one Census family, defined as married or common-law couples, with or without children or a one-parent family. 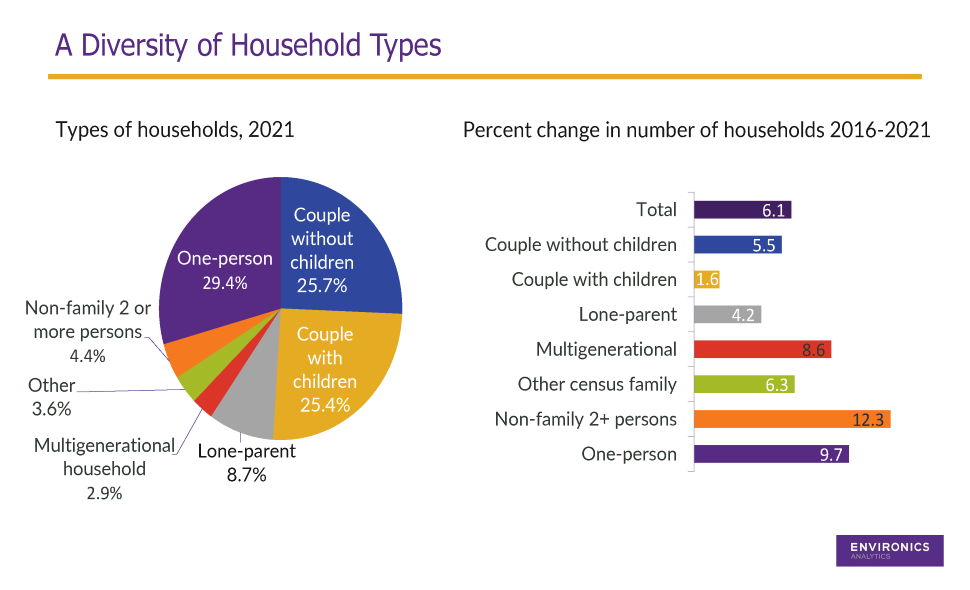 Pictured above: the types of family households (2021) next to a bar graph showing the percent change in number of households (2016-2021).

In the 2021 Census, couples could be classified according to their gender diversity status. Gender diversity status refers to whether both members of a couple are cisgender, meaning their reported gender corresponds to their reported sex at birth—or whether at least one member is transgender or non-binary. In addition, among cisgender couples, a distinction can be made between those composed of two people of different genders (a different gender couple and those composed of two people of the same gender).

Living arrangements among Canadians have been evolving and diverging for decades as various social and economic forces hold sway. Most children under the age of 15 (70 percent) lived with both of their biological or adoptive parents and without stepsiblings or half-siblings. Close to 2 in 10 children were part of a one-parent family, and an additional 9 percent were part of a stepfamily. There was little change in the living arrangements of children compared to 2016.

There has been a long-term upward trend among young adults to live with parents. There are several possible explanations for this trend, including economic forces causing low wages and poor employment prospects, more children choosing to further their education in post-secondary and graduate schools and the high cost of housing.

Living arrangements among Canadians have been evolving and diverging for decades, as various social and economic forces hold sway. In 2021 there were more persons than ever living alone.

Living alone has always been more common at older ages. In 2021, 42 percent of persons aged 85 and over lived alone compared to 7 percent of persons aged 20-24. However, living alone has actually declined at older ages, especially for women. In 2021, 53 percent of women aged 85 and over in private households lived alone down from 60 percent in 2001. The decrease in living alone is a result of recent life expectancy gains for men, which translates into more couples living together longer.

The 2021 Census reports income for the calendar year of 2020 when there were substantial government pandemic support payments. As a result, income data, in particular, changes over time, should be treated with caution.

In 2020, the median total household income was $84,000 and the median after-tax income was $73,000. Median after tax income was up 10.5 percent from 2015 after adjusting for inflation. The increase in income reflects, in large part, substantial government pandemic-related payments in 2020.

More than two-thirds of persons over the age of 15 received pandemic payments from one or more programs of federal, provincial or territorial governments. Payments were highest for younger persons; the median was close to $5000 for those 15-24, compared to about $600 for those aged 65 and over.

Among the provinces and territories increases in after-tax median household income were greatest in British Columbia (14.3 percent), Ontario (12.8 percent), Quebec (12.1 percent), Nunavut (11.8 percent), Prince Edward Island (10.3 percent) and Yukon (10 percent). Despite the special pandemic payments, the median after-tax income fell in Alberta by 4.6 and by 1.3 percent in Newfoundland and Labrador, reflecting the impact of the downturn in the resource sector.

A substantial drop in low-income households

Statistics Canada calculates various measures of low-income. In 2019, the Federal government defined Canada’s official poverty line based on a market basket measure (MBM). The MBM establishes poverty thresholds based on the cost of a basket of food, clothing, shelter, transportation and other items for a family of four that reflects a modest, basic standard of living. However, the calculation of the MBM requires data not yet available from the 2021 Census and therefore the Census MBM will only be available at a later time. For this Census release low income was measured by the “low-income measure after tax” (LIM-AT). This is defined as 50 percent of median after tax income of private households, adjusted for household size.

Although lower, the median after-tax income for women was up 16.7 percent compared to an increase of only 5.2 percent for males. 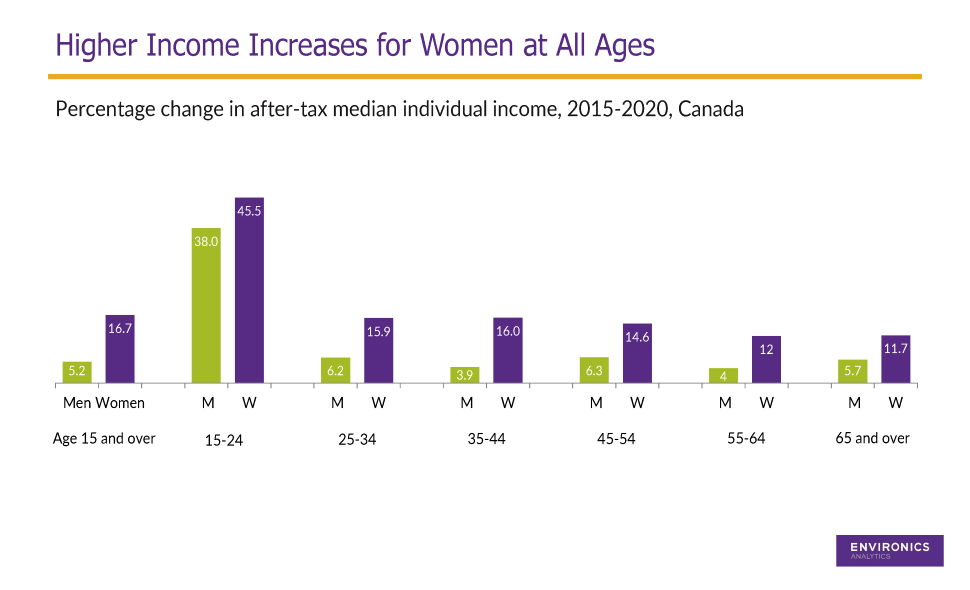 Pictured above: Percentage change in after-tax income for women at all ages (2015-2020).

Aggregate income continues to increase for women and seniors

Nearly half a million veterans in Canada and 100,000 currently serving in the Armed Forces

The 2021 Census included a new question asking about military service. The results showed that 97,625 Canadians were counted as currently serving in the Canadian Armed Forces (CAF) and 461,240 were counted as veterans.

The CAF were younger on average (36.2 years old) than the employed labour force overall (41.9), but currently serving women were older than their male counterparts.

The nuclear family is no longer the dominant Canadian household

Older, empty-nest couples and singles who choose to remain in their home will likely continue to fuel the demand for home remodeling services. As these Canadians settle into their newly renovated lifestyle, there may be opportunities for retailers that offer tableware, decorative items and other “nice-to-have” flourishes that were out of reach for their budgets when they were raising a young family.

The nuclear family no longer dominates the Canadian household landscape, and marketers should be sensitive to these new dynamics. Once again, segmentation tools that capture this shift in household profiles will help companies understand the reality of their customers, not the idealized view from decades ago.

At first glance, the increased incomes of Canadian households are generally good news for marketers. However, the increased incomes have not been matched by the same degree of increased spending. The result is that Canadians have built up a much higher level of savings compared to the pre-pandemic years. While such savings are a potential source of growing expenditures, the high inflation rates and increasing discussion of a possible recession might lead consumers to maintain their savings until the economic outlook is more favourable.

The income distribution across gender and age groups should remind marketers that women and seniors offer significant opportunities. In particular, marketers often overlook the Boomers. This growing older generation is vastly different from seniors of past years: they are more educated and enjoying more post-retirement years in relatively good health with higher wealth and considerable spending power. Marketers and advertisers should follow the money and pay more attention to this older population.

It is also important to recognize that summary measures such as the median hide a wide income distribution that likely reflects very different economic circumstances and consumer behaviours. Furthermore, although income is an important characteristic, it should be considered along with other demographic characteristics and consumer values. Subsequent census releases will provide additional income-related information, including data collected by the long-form census questionnaire on ethnocultural, housing, education and labour characteristics. Parsing these factors can be made easier for marketers with a consumer segmentation system, which can reveal the interplay between income and various consumer characteristics.

The new data on veterans allows marketers to better target this population. Future census releases will provide significantly more detail on the characteristics of the CAF and veterans populations.

For a more detailed analysis of these Census results, join our webinar on Thursday, July 21 at 2:00 PM ET.