Oct 26, 2022, 03:20 PM by Doug Norris, PhD - Senior Vice President and Chief Demographer
Dr. Doug Norris explores the sixth wave of data released from the 2021 Census highlighting the ethnocultural and religious diversity of Canada and the mobility and migration of the population

The sixth wave of data from the 2021 Census was released by Statistics Canada this morning, covering two topics: (i) the ethnocultural and religious diversity of Canada and (ii) the mobility and migration of the population.

After Canadian, English, Scottish, Irish and French origins, the largest origins reported alone or in combination with other origins by over one million persons were German (3.0 million), Chinese (1.7 million), Italian (1.5 million), First Nations (1.4 million), Indian (1.3 million) and Ukrainian (1.3 million).

Permanent resident immigrants now represent 23 percent of the total Canadian population, the highest level since Confederation. An additional 2.5 percent (925,000) of the population were in Canada as non-permanent residents, including students, temporary workers or refugee claimants.

As in past years, in 2021, the pattern of recent immigrant settlement was concentrated in four provinces: Ontario (44 percent), Quebec (15.3 percent), British Columbia (14.9 percent) and Alberta (14.5 percent). Although smaller, the number of recent immigrants in the Atlantic provinces (46,600) was up 67 percent compared to the 2011-2016 period. 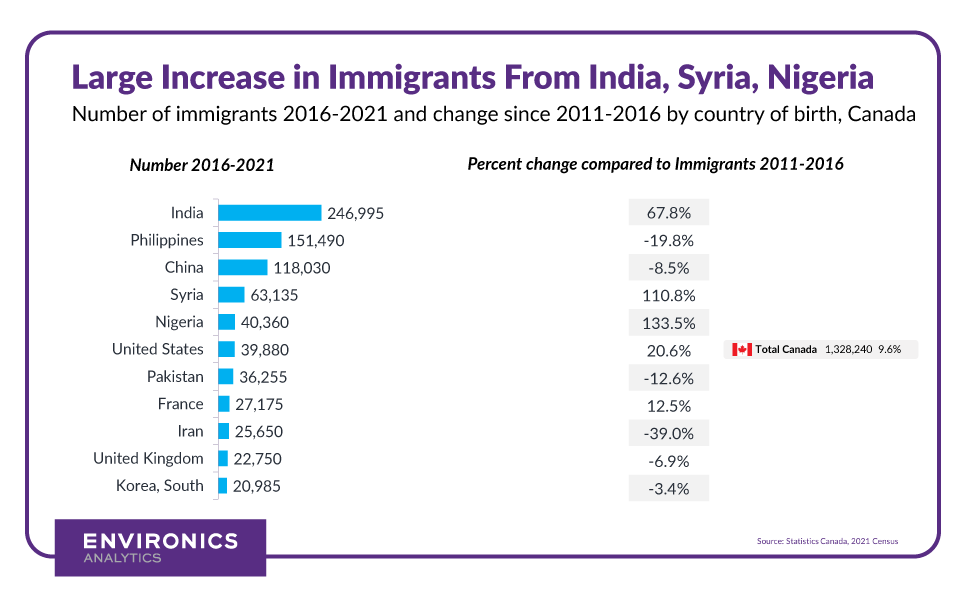 It is noteworthy that one in four immigrants who gained their permanent status since 1980 had prior experience in Canada as a student, temporary worker or in some other capacity. The percent with prior experience was highest for recent arrivals during 2016-2021 (36 percent).

Overall, in 2020, 12 percent of immigrants lived in a low-income (LIM after tax) household compared to 10.1 percent for the non-immigrant population. The low- income rate was 14.9 percent for those who arrived 2016-2019. Low-income rates were lower in 2020, in part due to pandemic related income payments.

The largest racialized groups were South Asians (2.6 million), Chinese (1.7 million) and Black (1.5 million). The fastest growing group was persons who reported belonging to more than one racialized group (up 30 percent). Most other groups grew by over 20 percent except Korean (13 percent), Chinese (8 percent) and Japanese (6 percent).

Although the majority of people in racialized groups are first generation (69 percent), nearly a third are second and higher generations.

Between 2011 and 2021, the population of Christian religions declined by 12 percent and the population of non-Christian groups increased by 51 percent, largely reflecting the religious composition of recent immigrant groups. The fastest growing were “Other religions and spiritual traditions” (up 75 percent), Sikh (70 percent), Muslim (69 percent) and Hindu (66 percent). Those reporting Jewish increased by 2 percent and Buddhist declined by 3 percent. Persons having no religious affiliation increased by 58 percent.

With Canada’s population drawn from many parts of the world, marketers need to understand how the needs and preferences of consumers vary. The way consumers hear and interpret information may be shaped by their past, and marketers will need to consider these influences when developing messaging and promotion campaigns.

While businesses increasingly want to connect with new markets, this fast-growing, diverse population presents marketers with a number of challenges. A first obstacle involves understanding the extent to which your current customer base includes various cultural communities. As diversity spreads out from the traditional markets of Toronto, Vancouver and Montreal, attention needs to be given to other urban areas with a growing immigrant population.

Another challenge for businesses is defining the target population of interest. The Census provides a rich source of data on the ethno-cultural diversity of the Canadian population. For example, marketers must decide on whether to focus on the entire group or only more recent immigrants. Should the second generation be included? Should temporary residents be included given that many have been in Canada for a number of years prior to gaining permanent status.

Even within a broad target group of interest, marketers must determine what sub-population they want to engage. Is a broad category—such as South Asian or Latin American consumers—sufficient or do marketers need to further target a group in terms of origin countries or languages? Should they focus separately on the Chinese populations from Hong Kong and Mainland China or those who speak Mandarin or Cantonese? The decision on what groups to target depends in part on the extent to which factors such as values, media and consumer behaviour are distinct.

Another important question concerns which language to use when communicating messages and placing ads in multicultural media. The Census provides data on a number of different language dimensions, including mother tongue, language spoken most often at home, other languages spoken regularly at home and knowledge of languages. Marketers should keep in mind that knowledge and use of English and French vary widely in these groups. A related question for consideration is the extent to which various groups consume multicultural media. Clearly, increasing diversity presents both opportunities and challenges for marketers.

Historically, the focus on immigrants has been mostly directed at permanent resident immigrants. However, in recent years there are over a million persons a year who are in Canada as temporary residents; most as international students or temporary workers. Although many may stay only a few years, they all require products and services while in Canada. Also, increasingly sizable numbers of temporary immigrants transfer to a permanent status, after completing their studies and/or gaining Canadian work experience. In 2021, nearly half of new permanent residents had transferred from a temporary status.

As a result of the increasing interest in attracting immigrants, particularly new immigrants, Environics Analytics has recently developed, NewToCanada. This product is based on data obtained directly from Immigration, Refugee and Citizenship Canada (IRCC) and is modelled down to the census dissemination area level. NewToCanada includes up-to-date data on both permanent and temporary immigrants broken down by country or region of origin and data are updated on a quarterly basis. Data can be linked to EA’s PRIZM® segmentation system to better understand the characteristics of new immigrant groups.

Finally, recent data suggests mobility and migration patterns of Canadians are changing. To better monitor mobility patterns, EA is developing another new product, MoverStats, that will track moves on a very timely basis. Watch for it in the coming months.

A more detailed analysis of these Census results will be presented in a webinar scheduled for 2:00 p.m. EDT on Thursday, November 3. You may register here.