The second wave of data from the 2021 Census was released by Statistics Canada this morning, including all-new data on gender and the more established data on sex at birth. Additional data featured in this release are the age distribution of Canada’s population, data on dwelling types and the make-up of those living in collective dwellings such as retirement and nursing homes.

The gender make-up of Canada’s population

The 2021 Census included a new question on gender identity in addition to the traditional question on sex at birth. Together these two questions provide data on transgender and non-binary people. Canada is the first country in the world to include such data in a census.

Nova Scotia (0.48 percent), Yukon (0.47 percent) and British Columbia (0.44 percent) had the highest proportions of transgender and non-binary people aged 15 and older among provinces and territories. Victoria (0.75 percent), Halifax (0.66 percent) and Fredericton (0.60 percent) had the most gender diversity among Canadian large urban centres.

Nearly 1 in 6 non-binary people aged 15 and older (15.5 percent) lived in the downtown core of a large urban centre. This share was more than twice that of transgender people (7.0 percent) and over three times higher than that of persons who reported their sex at birth and gender to be the same (cisgender people) (4.7 percent).

Although Canada is aging, it is still younger than most G7 countries. While 19 percent of Canadians were aged 65 or over, in the United States it was 16.6 percent and 18.7 percent in the United Kingdom. Older countries ranged from 20.8 percent in France to 28.4 percent in Japan.

Even though Canada’s total population grew by 5.2 percent between 2016 and 2021, growth varied widely by age group. 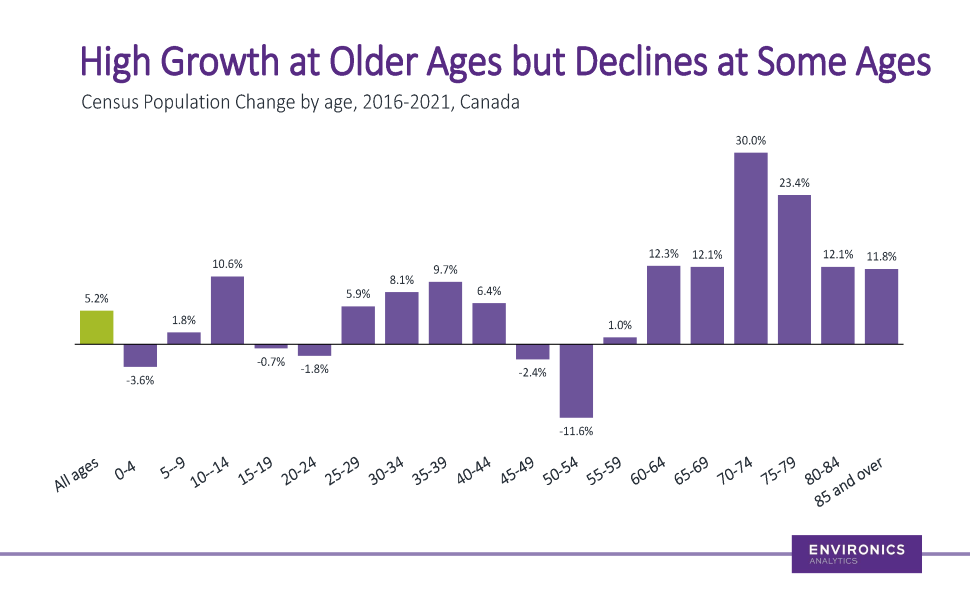 Pictured above: Population growth by age group for the latest Census period (2016-2021).

Growth was highest amongst the older age groups of Canadians. The population over the age of 65 grew by nearly 18.3 percent to reach just over 7 million compared to only a 2.6 percent increase for the population under age 65. In 2021, there were over 9,500 centenarians, up nearly 16 percent from 2016.

Three age groups, those under age 5, 15-24 and 45-54, actually declined in size over the period of 2016-2021. The 45-54-year-olds are the front end of Generation X that were much smaller than the Baby Boomer cohorts ahead of them, and the 15-24 -year-olds are the children of Gen X. The decline in the number of young children reflects the lower number of births from 2016-2021 compared with 2011-2016. The drop was particularly sharp during the pandemic period, and these drops will likely shift to higher age groups in the next decade.

Across Canada’s regions, the Atlantic Provinces were the oldest, with 22.6 percent of their population aged 65 or older. On the other extreme, the provinces with the lowest percentage of senior citizens (those aged 65+) included Alberta (14.8 percent), Manitoba (17.1 percent) and Saskatchewan (17.5 percent). The three northern territories—Nunavut, Northwest Territories and Yukon—were also very young with their populations aged 65 and older accounting for just 4.4 percent, 10 percent and 15 percent of the populace, respectively, in part due to their young Indigenous population. 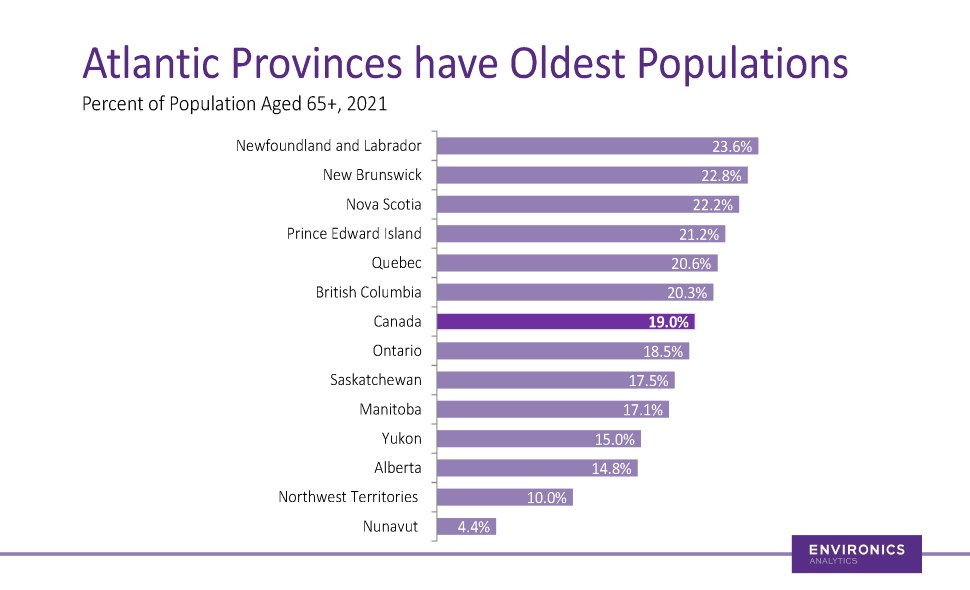 Pictured above: Percentage of the population aged 65+ in Canada's Atlantic provinces (2021).

The county’s largest urban areas (CMAs) were the youngest, with 17.5 percent of their population aged 65 or over compared to 22 percent for urban areas between 10,000 and 100,000 and 23.2 percent for rural areas. The oldest CMAs were Trois-Rivières, Saguenay, Nanaimo, St. Catherines-Niagara and Victoria, with over 23 percent of their population aged 65 and over.

Three areas in Alberta—Wood Buffalo, Canmore and Okatoks—saw their seniors’ population increase by more than 50 percent between 2016 and 2021.

Three-quarters of the population of downtowns is made up of working-age people (15 to 64 years) compared to 64.8 percent of the total population. More than 80% of the population in downtown Calgary, Halifax and Toronto are in this age group.

Most of the data on dwellings will be reported in the upcoming Census releases. However, this release includes the structural type of dwellings classified as private dwellings. Overall, there were just under 15 million private dwellings in Canada, an increase of 6.4% compared to 2016. Over half (52.6 percent) were single-family dwellings, 10.7 percent were apartments of five or more storeys, and the remaining 37 percent were row, semi-detached or other types of dwellings.

A collective dwelling is a dwelling of a commercial, institutional, or communal nature in which a person or group of persons reside or could reside. Collective dwellings are organized into ten broad categories.

Unparalleled implications for a growing population of wealthy seniors

The new data on the gender make-up of Canada’s population provides organizations with information on population segments that might be of interest for marketing products or delivering services. It also provides valuable baseline data to allow organizations to better measure the diversity of their workforce.

Canada’s population continues to age, and seniors are undoubtedly the fastest-growing part of the population, with growth expected to increase by a further 50 percent over the next 20 years, with those aged 75 and over doubling in that time. Although incomes and expenditures are generally lower at older ages, seniors have considerable wealth. Therefore, the large and rapidly-growing number of seniors means that the older population will account for an increasing share of total expenditures. This offers potential for businesses and industries offering products and services designed for seniors, especially the health care, travel and financial services industries.

The aging of the population also has implications for the housing market. Most seniors express a desire to remain living in their local communities. This trend likely will result in a greater need for home care services and housing renovations to better accommodate an older population.

In five years, the oldest Baby Boomers will turn 80, and with it, there will be a shift to many more one-person households. The trend of apartment living, including condos and rental apartments, is likely to pick up. Assisted living residences for seniors will also likely attract increased attention as health problems become more common among aging Canadians and their ability to live independently wanes.

With decreased mobility and many seniors living alone, municipalities will also face a need for better public transportation. And businesses offering home delivery of products targeted to seniors are likely to become even more popular.

For a more detailed analysis of these Census results, join our webinar on Thursday, May 5 at 2:00 PM ET.