Seeing Canada Through a New PRIZM - Latte Life, Boomer Bliss and Came From Away Among the Newest Lifestyles

Based on data from a dozen privacy-compliant demographic, marketing and media sources, PRIZM allows decision-makers to analyze their customers and markets at the neighbourhood level anywhere in Canada. Businesses, not-for-profits and government agencies all use PRIZM for everything from designing marketing campaigns and choosing store locations to merchandising, media planning across traditional and digital channels, and mobile analytics. By linking PRIZM segments to customer records, they can determine what their patrons are buying, doing and thinking—and the best way to reach them with the right products, media and messages. And with the nation experiencing the new normal imposed by the COVID-19 pandemic, PRIZM can help organizations better understand the motivations and behaviours of their customers and track the recovery of businesses.

The latest edition of PRIZM provides fresh insights into the nation’s ever-evolving markets and neighbourhoods. At the top of the PRIZM ladder is The A-List, a cosmopolitan segment home to the nation’s richest couples and families. In neighbourhoods like Toronto’s Bridal Path and Montreal’s Elbow Park, residents fill their stately homes with original art, wear designer clothes, buy organic food and own the latest in mobile technology. By contrast, the poorest Canadians live in Just Getting By, a segment of downscale neighbourhoods in cities like Oshawa and St. Catharines. Here, younger singles and families shop at discount department stores, unwind at local nightclubs and catch meals at fast-food restaurants.

In between are segments that capture the increasing popularity of high-rise condominiums (New Asian Heights, Savvy Seniors), the growing prominence of the Millennial generation (Indieville, Social Networkers) and the emerging cultural diversity of midsize cities (Middle-Class Mosaic, Midtown Movers). The new edition of PRIZM features 14 predominantly francophone segments, 17 segments with large numbers of immigrants and two segments—Diversité Nouvelle (New Mix) and Enclaves Multiethniques (Multiethnic Enclaves)—with a significant presence of both francophone and immigrant neighbourhoods in the Montreal CMA. Although the number of francophone segments declined in the new PRIZM, the number of segments with significant bilingual French-English speakers increased.

“PRIZM captures Canada’s changing society beyond the aging of the Baby Boomers and the Millennial generation coming into its own,” says Jan Kestle, president and founder of EA. “At a time when businesses are increasingly turning to data to make better decisions, PRIZM provides them with authoritative information about what’s really happening in Canada’s neighbourhoods.”

Nearly a year in the making, PRIZM reveals important changes in Canadian demographics, lifestyles, behaviours and values that have occurred over the past decade. Of PRIZM’s 67 segments—one less than the previous edition—62 are new, reflecting the ongoing evolution of Canada’s lifestyles. (The five lifestyles that remain from the previous system underwent economic and social changes, though not enough to affect the fundamental values and behaviours of the segment members.)

The system has been built at the postal code and dissemination area levels—representing 20 households and 260 households, respectively—to deliver comprehensive information about consumers at all levels of geography. By linking PRIZM to dozens of databases from such sources as Vividata, Numeris and AskingCanadians™, EA offers users access to more than 30,000 variables across a wide range of topics—from digital and traditional media usage to finance, technology, retail and automotive preferences.

Unlike other segmentation systems, PRIZM incorporates psychographic information to better understand the drivers behind behaviours and consumer choices. SocialValues data from EA’s sister company, Environics Research, played a key role in naming the segment Eat, Play, Love, which consists of younger, well-educated urban singles who enjoy dining at ethnic restaurants, play every sport imaginable and score high for supporting the value Sexual Permissiveness. Canadians most committed to the value Saving on Principle are found in Slow-Lane Suburbs, home to older and mature suburban singles and couples.

Canada’s increasing urbanization is evident in PRIZM’s revised urbanity classifications. Gone is the exurban classification, the result of the nation’s big cities expanding and pushing suburban sprawl out into exurbia. In the new PRIZM, the Canadian population is four times as urban and suburban (54 segments) as it is rural and town (13 segments). And it reveals an entirely new urbanity classification, “urban fringe,” characterized by communities once classified as suburbs—like Mississauga and Markham around Toronto, and North Vancouver and Burnaby in the Vancouver CMA—that have been absorbed by urban sprawl. Urban fringe segments include Mature & Secure (older and mature upscale couples and families) and Multicultural Corners (diverse, upper-middle-income families).

But perhaps nowhere has Canada undergone more change than in the area of diversity. Since the previous edition of PRIZM, the number of culturally diverse segments has grown from 14 to 19, including Asian Achievement (successful, middle-aged and older suburbanites) and Metro Melting Pot (diverse, middle-income city dwellers). In fact, Canada is home to four predominantly Asian segments and two South Asian lifestyles. The system has even captured the diversity within ethnic groups. In Multiculture-ish, an upscale suburban family segment, residents speak more than a dozen different mother tongues at above-average rates—from Italian to Urdu to Bengali.

Danny Heuman, EA’s Chief Analytics Officer and the chief architect of PRIZM, observes that despite these segments’ differences, the vast majority of immigrants gravitate to Canada’s largest cities for similar reasons. “They’re drawn to these cities for job opportunities and to be close to others who share the same language, culture and ideals,” says Heuman, “At the same time, these immigrants have chosen Canada because of the harmonious diversity among the population.”

PRIZM’s ability to reveal trends in Canadian lifestyles has been a boon to organizations seeking to engage with specific markets. Banks like CIBC use the segments to understand their customers’ financial needs and develop the right messages to reach them. Toronto Fire Services used PRIZM to promote fire safety, reaching citizens most at risk with an education campaign using out-of-home and digital media. An oil company seeking to grow revenue at its 400+ gas station convenience stores used PRIZM and several PRIZM-linked shopper surveys to optimize each store’s layout, identify trade areas and competitors, and develop promotion campaigns that varied according to the time of the day.

“The days of one-size-fits-all marketing are long gone,” says Kestle. “Today’s organizations want to better understand who their customers are, how they can better engage them and where they can find more of them. With PRIZM, they can develop marketing strategies and campaigns that are relevant and cost effective, and as the economy rebounds in the coming months, PRIZM will help companies reconnect with their loyal customers and address pent-up demand.”

From the socioeconomic heights of Canada’s big cities to its heritage-rich small towns, PRIZM reveals what makes each segment unique and how they all contribute to the national tapestry. With this latest release from EA, Canadians can see for themselves the remarkable diversity in their lifestyles. And organizations seeking to connect with Canadians can see a clear path to understanding their needs.

Among the 62 new lifestyles that emerged in EA’s PRIZM segmentation system:

Emblematic of Canadian’s aging society, Mature & Secure consists of older and mature couples and families aging in place in urban fringe neighbourhoods. More than half the maintainers are over 55 years old. About 80 percent of this segment’s households live in Canada’s largest markets. University educated, those still in the workforce earn upscale incomes from management and white-collar positions. Financially secure, many have the time and money to attend arts, cultural and professional sports events; they particularly like watching tennis, golf and hockey matches. 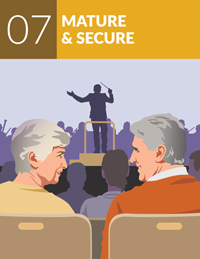 Reflecting Canada’s increasing diversity, South Asian Enterprise is an urban crossroads. Nearly 60 percent of the populace are immigrants and half the members identify as visible minorities from South Asia. The segment contains upper-middle-class families living in a mix of new singles, semis and duplexes. Few segments have larger households: nearly 60 percent contain four or more people. They enjoy swimming, baseball and racquet sports, as well as visiting theme parks and museums. Many represent a prime market for casual clothing, mobile phones and online courses. 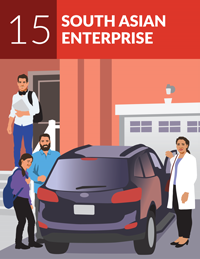 Indieville is a classic urban hodgepodge: a mix of younger and middle-aged maintainers, singles and couples, and first- and second-generation Canadians. Drawn to the vibrant, urban core of the nation’s big cities, most residents live in Toronto. Residents here typically live in older, low-rise apartments, duplexes and semi-detached dwellings. And most have active social lives, going to nightclubs, sports bars, pop concerts and art galleries. Tech-savvy, they like to shop online for books, music, fashion and groceries.

Environics Analytics (EA) is the premier marketing and analytical services company in North America, helping customers turn data and analytics into strategy, insights and results. Established in 2003, EA specializes in developing data-driven strategies, improving data quality, understanding your customers, analyzing markets, and executing and measuring the results. Our ENVISION platform provides quick and easy access to our comprehensive data—including the latest mobile data—to generate authoritative reports and detailed maps. Environics Analytics' team of quantitative marketers, modellers and geographers help organizations develop data-driven solutions to their most significant business challenges and achieve success along every phase of their analytics journey. For the past three years, EA has been recognized as one of Canada's top growing companies by Canadian Business' Growth 500 listing. To learn more, visit www.environicsanalytics.com