As Canadians, we know the month of February doesn't typically bring with it that springtime feeling many long for. It does, however, signal the start of spring training for Major League Baseball. Many baseball fans bask in the fact that the game we all love soon will be back in ballparks and on television.

Down in Florida and Arizona, pitchers and catchers report to team camps, followed by position players. Not long afterwards, fans north of the border are bombarded with images of our favourite sports reporters wearing shorts and bragging about their golf scores almost as often as they report on a fresh crop of young prospects. 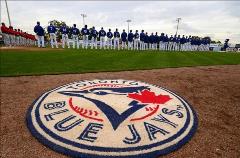 In my last blog, I explored the differences between professional baseball, basketball and hockey fans in Canada. Before I get labelled as a one-trick-pony sportswriter by my colleagues, I wanted to write one more blog about baseball.

droughts involving our home team. The Blue Jays haven't made it to the post-season in over 20 years, since they won the World Series in 1993. I was 5 years old then. I want to suggest, however, that baseball fans can get past a couple decades of disappointment without losing all hope; ever met a Leafs fan?

But baseball has always been about hope. Some years ago, the late sportswriter Dick Young wrote that baseball owners don’t understand their product. They think they’re selling entertainment when, in fact, they’re selling religion.

And numbers. Baseball is a game of numbers, and that’s a big reason why I enjoy the game so much: What kind of Geek can deny the allure of sabermetrics? The way management approaches drafts, and even when they put someone on the field, has changed over the years due to the role of data analytics within the game.

The whole data thing starts innocently enough: 74-88—the Toronto Blue Jays’ win-loss record at the end of the 2013 season, bottom of our division. But that’s only the beginning. I have quickly learned through my work at Environics Analytics the importance of unearthing insights within the data, and not to stop with just one
Some traditionalists claim the analytical
techniques used by Oakland Athletics general
manager Billy Beane (played by Brad Pitt in
the movie “Moneyball”) ruined the game. As
a Geek, I simply can’t agree2.

Baseball brings with it depth, both in the starting lineups and in the watching of a game. It is not a skim-the-surface type of sport. Every pitch brings with it an opportunity for both the offence and the defense. Rogers Communications management, who bought the Blue Jays in 2000, knows the intensity of the players and their fans, and with that comes more opportunity. They track numbers, too, you know. The Blue Jays had an attendance of over 2.5 million at the Rogers Centre in 2013, good enough for sixth place out of fifteen American League ballparks. Wonder how many hot dogs, squirts of ketchup, boxes of cracker jacks and cans of beer that equals? Someone knows, and they are using the information to stock up for this season.

In the baseball world, the Toronto Blue Jays are typically identified as a mid-size or large market team—evidenced in part by their attendance records, even when posting lackluster results. But not everyone shares my zeal for the Jays. Through the use of PRIZM-linked data, I was able to identify PRIZM lifestyle clusters that showed interest in attending baseball. When focusing specifically on the Toronto CMA, younger urban clusters such as Urban Spice and Newcomers Rising pop-up – perhaps signaling the social aspect of the game. Or very good marketing. Or both. It is no secret how important social media has become in professional sports, and the Toronto Blue Jays (team and athletes) have completely embraced platforms like Twitter. Knowing that these younger urban clusters have such representation at baseball games, it makes sense that star slugger Jose Bautista (@JoeyBats19) has 475,000 Twitter followers.

At the end of the day, a win is a win—and winning leads to the post-season and more exciting games. But there are so many intricacies, oddities, heart-stopping and jaw-dropping events in everyday baseball that we can't simply look at team's record after the season ends and pretend to know what went on. So even though the Blue Jays didn't live up to expectations last year, I can’t wait for baseball to be back and won't let anyone rain on my parade, at least not at home games, because thankfully we have a dome to guard against rain delays.

—Uschi Erne is a Client Advocate in the finance, insurance, telecommunications and travel practice at Environics Analytics.